Demolition of former McGinness home complicated by "a ton of asbestos" 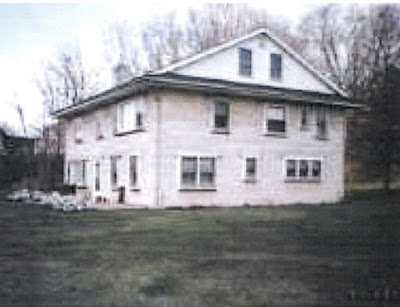 [Photo: Planning Commission meeting packet]
A proposed demolition of the former McGinness home at 1020 Manor Street might be delayed due to the presence of asbestos.

According to borough engineer Derek Rinaldo, "There is a ton of asbestos in the property - a ton." Rinaldo made the remark during discussion at the August 16, 2022 Columbia Borough Planning Commission meeting. Rinaldo didn't say how the borough will handle the asbestos. At the July 12, 2022 Columbia Borough Council meeting, however, borough manager Mark Stivers said remediation will be necessary. (July 12 was apparently the first meeting in which the issue of asbestos at the property was mentioned.)

Rinaldo said the borough had looked into the possibility of allowing the fire department and EMS to use the property for training but due to the asbestos that is no longer a possibility. However, borough councilman Eric Kaufman, who was in the audience, said that the fire company had already used the property the day before. (At the June 28, 2022 borough council meeting, council president Heather Zink said the police department had been using the building and the fire department also planned to use it before demolition.)

Facilities Manager Wilson Affeld told commission members there is a full basement under the property which will need to be filled in after the property is demolished. A contractor will do the demo and the borough will fill in the basement using its own materials and equipment, according to Affeld.

After discussion, the planning commission voted to recommend demolition of the property to borough council. Borough council previously voted to approve the demolition at its June 28, 2022 meeting. No cost estimates for demolition or asbestos remediation were provided at either meeting.

The borough is demolishing the building due to liability concerns and costs of utilities and maintenance. The house is located at the former airfield which the borough purchased last fall.
Posted by Joe Lintner at 10:38 AM