Albatwitch Day 2021: What to know about the urban legend before celebrating at Columbia event 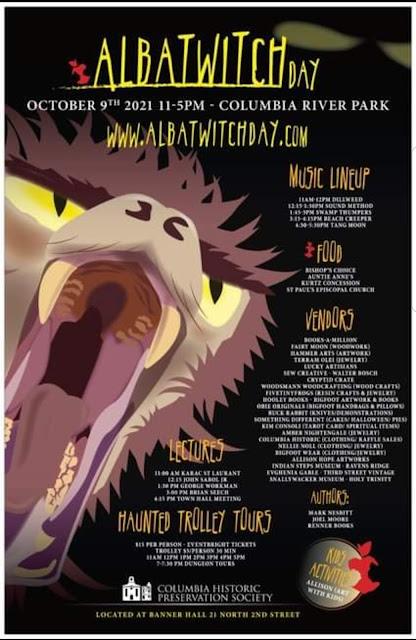 Legend has it there's a small, hairy creature residing near Columbia that has a penchant for apples.
The Albatwitch, Lancaster County's very own local urban legend, has possible roots in both Germanic and Susquehannock Indian lore. It's often described as a 3-to-5-foot tall humanoid creature that is covered in black hair.
Its name is a play on "apple snitch," and the Albatwitch always carries apples and will throw cores at trespassers, according to legend.
Every year since 2014, organizers in Columbia have put together an Albatwitch Day celebration to learn more about the elusive creature.
This year's event is Saturday, Oct. 9, from 11 a.m. to 5 p.m. Tickets for a daytime haunted trolley tour cost $5 a person and are first-come, first-served. Nighttime tours are sold out.
Albatwitch Day will feature several live music performances from artists including traditional folk band Dillweed, the Swamp Thumpers, rock band Sound Method, cryptoid band Beach Creeper and hard rock band Tang Moon.
If You Go
What: Albatwitch Day, a celebration of Lancaster's favorite apple-throwing urban legend.
When: Saturday, Oct. 9, from 11 a.m. to 5 p.m.
Where: Columbia River Park, 21 Walnut St., Columbia
It will also feature lectures and demonstrations from paranormal authors and researchers.
For more information, visit albatwitchday.com/home.
https://lancasteronline.com/features/entertainment/albatwitch-day-2021-what-to-know-about-the-urban-legend-before-celebrating-at-columbia-event/article_c44389da-25f3-11ec-8222-9be75b8c0413.html?utm_medium=social&utm_source=email&utm_campaign=user-share
Posted by Joe Lintner at 7:02 AM