The McGinness airport purchase - What lies behind it

"None of us know for sure why they did not go through with this purchase several years ago. We only know what people have said and what was put in the letter which may or may not be accurate."
Council President Heather Zink
August 10, 2021

However, according to borough documents, we do know why: 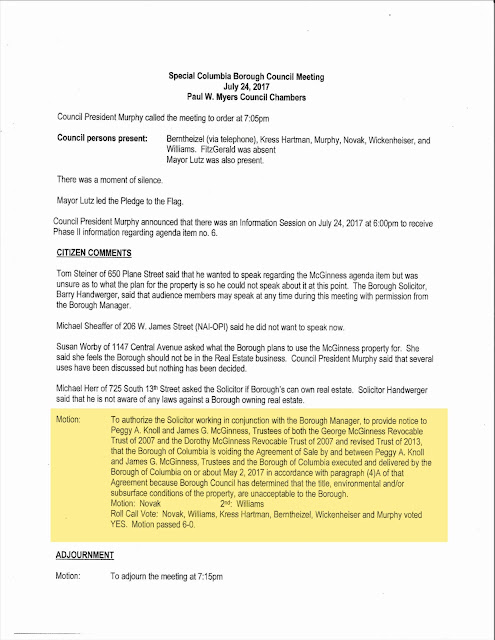 Minutes of the Special Columbia Borough Council Meeting, July 24, 2017
The answer is clearly stated in the minutes of the July 24, 2017 Columbia Borough Council meeting, which says that the motion was to authorize the solicitor to provide notice to the McGinness family that the borough of Columbia "is voiding the Agreement of Sale... because Borough Council... has determined that the title, environmental and/or subsurface conditions of the property, are unacceptable to the borough."
That motion passed 6-0. (Councilwoman Fran FitzGerald was absent.)
The reason is also clearly stated in a letter dated July 25, 2017 from borough solicitor Barry Handwerger to the McGinness family:

"This firm serves as Solicitor for the Borough of Columbia. Please be advised that at its public meeting last evening, July 24, 2017, Borough Council determined  that the environmental conditions and subsurface conditions of the properties referenced in the above Agreement were unsatisfactory and therefore directed that the above referenced Agreement of Sale be voided."

So, what has changed? Something must have, because in a May 18, 2021 LNP article, Columbia Borough Manager Mark Stivers says, "Nothing of extreme importance has come up" in the recent studies. Has the borough initiated any sort of remediation for the "subsurface conditions of the property"? (There's no publicly available record of this ever happening.) If the conditions were unacceptable in 2017, then why are they acceptable now?

The fact that the council president stated that the letter "may or may not be accurate" suggests that either the stated results of the study are inaccurate, or the borough solicitor is inaccurate. Or that contamination was not the real reason behind the cancelation.

Here's a reason to suspect the latter:

At the October 13, 2020 council meeting, councilman Todd Burgard stated that the purchase deal was canceled because of price, not contamination. Burgard may have inadvertently told the truth.
Here's why:

Even though contamination was an issue, it may not have been a deal breaker for the borough.  The main issue may have been dissatisfaction with the price, and the borough was looking for a way out. If it had canceled the sale due to price, the McGinness family could have sued. The only legal option, then, was for the borough to claim it was dissatisfied with the subsurface conditions.

To add to the confusion, borough manager Mark Stivers offered yet another reason for the cancelation at the April 6, 2021 council meeting: "We decided at that point that we didn't have a solid plan."
Supplemental:
Taxpayers footed the bill for a legal battle to prevent the release of the first environmental study done by Rettew Associates in 2017. In response to a right-to-know request for the release of the study, the Pennsylvania Office of Open Records ruled that the study could be released. However, Columbia Borough, under borough manager Rebecca Denlinger, chose to fight the ruling - at taxpayers' expense. In July of this year, that battle was finally ended. 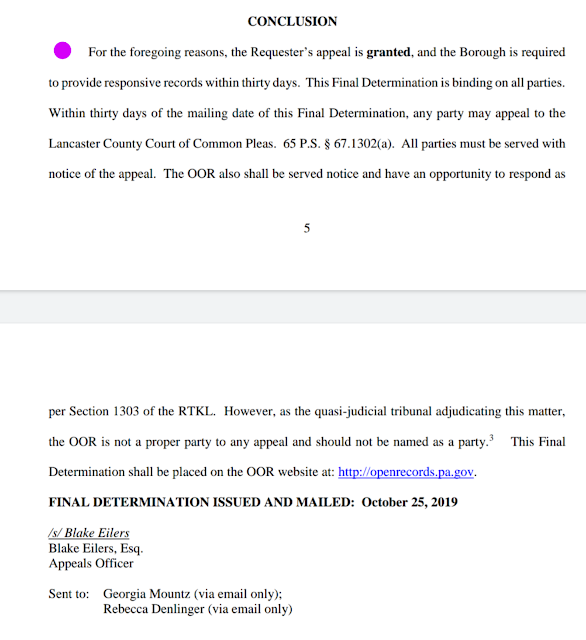 This is the text of the Pennsylvania Office of Open Records decision to release the results of the Rettew studies. Columbia Borough appealed the decision and refused to release the records. For some reason, the borough wanted the information kept secret even though legally it could have released it.
At a recent council meeting, Stivers promised to release the results of the studies, once settlement on the McGinness property is finalized. The most recent studies (from ECS and ELA) cost taxpayers nearly $150,000.
By the time this article is published, settlement on the sale of the property will likely have been completed, but many questions remain unanswered, including the following:

Why are officials playing dumb and saying they don't know why the original sale was canceled?
Why did the borough hide the results of the studies when it was not legally required to?

Why did Burgard say the sale was canceled due to price, not contamination?
Why did Stivers say it was because they didn't have a solid plan?
Why do news articles quoting officials say it was due to a lack of business interest?

There's been a notable lack of transparency from borough officials on this issue. We deserve more than just a "Trust me" from council president Zink. We as taxpayers have the right to expect more.  We have the right to the truth.
Posted by Joe Lintner at 7:10 AM