Borough isn't legally required to do home inspections, but council votes to keep doing them anyway 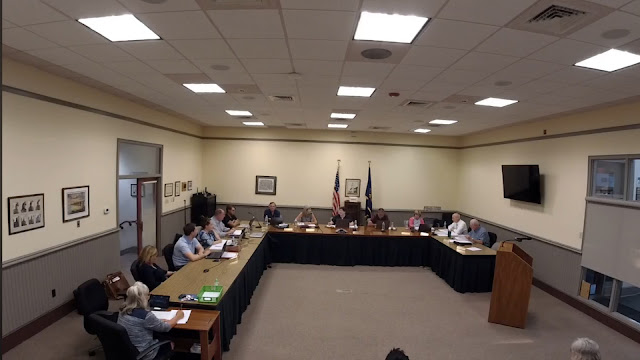 [According to current code, the homeowner or realtor is responsible to notify the borough when a home is put on the market for sale. The code department then completes an inspection on the property at the owner's expense.]

Councilwoman Sharon Lintner raised the issue, noting that Columbia Borough is not legally required to carry out the inspections and that eliminating them would help alleviate the financial obligation to taxpayers. She also argued it would reduce code employees' workload, allowing them to focus on rental inspections.

"We have no legal requirement obligating the borough to do these inspections," Lintner said, noting information she received from borough solicitor Evan Gabel.

Lancaster City, West Hempfield Township, and the boroughs of Lititz, Warwick, Manheim, Mount Joy, Marietta are some of the municipalities not requiring the inspections, according to Lintner. She asked if Columbia is any safer than these boroughs because of the inspection requirement.

[NOTE: There was a recent discussion of code department staffing because of an inspection backlog due to Covid. From the July 6, 2021 meeting minutes:
"Councilperson Burgard suggested hiring a full-time inspector for the code department to get caught up in rental inspections that fell behind due to Covid. Councilperson Stevens suggested hiring a temporary part-time person so that the costs due [sic] not exceed the budgeted dollar amount for staffing in the code department."]

Lintner said she found that the deeds recorded year-to-date do not match up with the number of homes that were actually inspected. In fact, only about half the number of homes sold were inspected. She said this creates an arbitrary situation which is unfair to some, especially because fees are attached to the inspections, specifically $100 for the inspection and another $100 for the certificate of occupancy. In addition, there is a $50 re-inspect fee if infractions are found during the initial inspection.

In a rambling discourse, Dommel provided anecdotes to council about his experiences in various properties including one in which he found several cans of fuel oil in a resident's basement.

When questioned, Dommel said he does not inspect foundations or electrical panels even though those items are listed on the inspection sheet posted on the borough's website. Dommel appeared to contradict his argument on the necessity of inspections by suggesting they are not especially stringent, some being completed in as little as 15 minutes. He also admitted that he sometimes points out issues not listed on the sheet.

Ultimately, the motion to abolish the ordinance failed in a 4-3 vote, with Peter Stahl, Eric Kauffman, Fran FitzGerald, and Todd Burgard voting to keep doing the inspections, and Lintner, Heather Zink, and Howard Stevens voting to eliminate them.
Posted by Joe Lintner at 5:52 PM

Curious, have they looked into the liability of unqualified inspectors (electrical, water, sewer & structural) doing inspections? Or the fact that some avoid the inspection and some are snagged and made to pay the fees? You can't treat people like that as a governing entity. Fair across the board, everyone or no one. There's a lawsuit in their future I would believe. If they are issuing occupancy permits on homes that are for sale without those important issues being inspected. What happens if they issue an occupancy permit and something they saw but did not qualify professionally to weigh in on (so they ignore it) causes injury or death to a future occupant? I'm no lawyer, but they can't cherry pick who to inspect and who gets a pass and charge fees for that. Dangerous waters here in my opinion. Looks like they just enjoy the revenue this generates and don't want to give it up, kind of a kangaroo court type of decision. If they can't properly staff that department, they should opt out of this "service" and added burden to home sellers and let the buyers, sellers and banks hash out home inspections.