Takeaways from council's last meeting of 2020:
[An interruption of the Facebook livestream halted the public's ability to view the Columbia Borough Council meeting on Tuesday, December 22, 2020, but an archived version was posted on the borough's Facebook page on December 24.]
The 2021 budget
Council voted 6-1 to adopt the 2021 budget, projected to be $6.87 million.The municipal millage rate will remain at 8 mills, but only because over half a million dollars was pulled from reserves. Councilman Howard Stevens was the no vote. 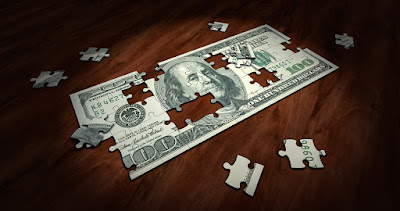 (The municipal millage rate has fluctuated over the past five years. In November 2015, council shot down an opportunity to reduce millage a quarter of a mill, from 8 mills to 7.75. Council had discussed lowering the rate but ultimately voted 4-3 to keep it at 8 mills. In 2017, the rate dropped to 6.6 mills for the following year. The decrease was due to the 2017 reassessment in which the rate decreased in proportion to an increase in taxable assessment. At the end of 2018, council voted to increase millage 21.2% to 8 mills, where it remains today. Current councillors Todd Burgard, Fran FitzGerald, and Pam Williams were on council at the time and voted for the tax hike.) 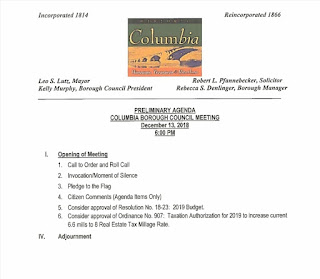 At last week's meeting, finance manager Kyle Watts was asked if he sees Columbia ever being in a position again to lower the millage. Watts gave a brief scenario of possibilities and said that's the direction we want to go.

Covid
Mayor Leo Lutz and Police Chief Jack Brommer reminded residents to take precautions in regard to Covid. Brommer said the borough has received notification of an increasing number of Covid cases.
The municipal bond
Council voted to refinance the borough's municipal bond, potentially saving taxpayers a significant amount of money in the end (the end being 2038). However, before those savings are realized, annual payments over the next few years will actually be higher, meaning taxpayers must come up with thousands more each year to make the payments. Keep in mind that the borough already borrowed from reserves this year to avoid a tax increase.
Dumpsters
Regarding the dumpster fee of $10/day, councilwoman Sharon Lintner asked how long dumpsters can remain on borough streets taking up parking spaces. Currently, there is no set time frame, but as a result of discussion, a change will be made in the application process - possibly a requirement to renew weekly - but no change in the daily fee. 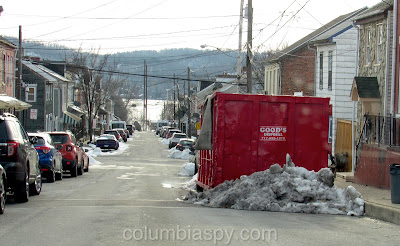 Tree lights
Taxpayers were charged $1,000 to hang the Christmas tree lights in Locust Street Park this year. This has been an annual charge since 2019. Borough manager Mark Stivers said there is another fee for taking them down in the spring but did not specify an amount. Fees apparently include lift rental. Arnold's Property Services, an out-of-town outfit, has been providing the service. Previously, the fire company hung the lights every year, but in 2019, council chose to pay Arnold's to do it instead. (Taxpayers paid several thousand dollars for new lights in 2018.) Lintner suggested keeping the money local, if possible. 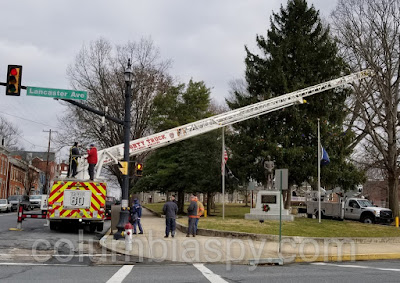 The fire company hanging lights
at Locust Street Park in 2018.
Posted by Joe Lintner at 4:24 PM