Council discusses pay raise for itself and the mayor 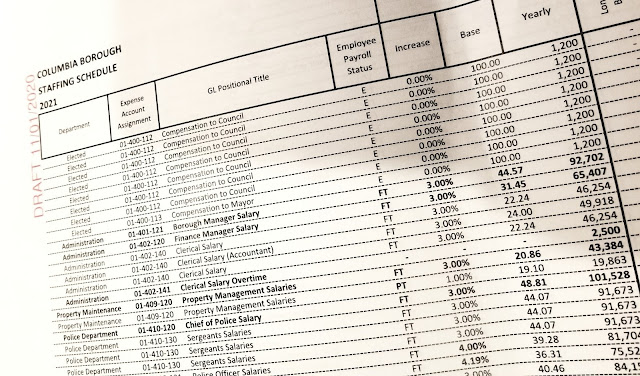 Columbia Borough Councillors might soon decide to give themselves and the mayor a pay raise that would almost triple the combined annual compensation for the eight officials, from $9,600 to $25,920.

During an informal discussion at last Thursday's work session, council president Heather Zink floated the idea, saying "people" had asked her what the process was and if it could be brought up for discussion. She did not specify who made the request.

Council vice president Sharon Lintner rejected the idea outright: "I certainly am not in favor of that. I just want to make that really, really clear, because I ran to try to stop spending money, not to give council a raise."

Councilman Todd Burgard also opposed the idea, at least until the borough has the funds. "I don't think we should do anything until we have a surplus in our budget," Burgard said.

Councilman Howard Stevens expressed a similar sentiment: "I think as long as we're taking money out of reserve to balance the budget, I don't think council should take any money."

Councilman Eric Kauffman was the only member who spoke out in support of a raise: "I'm in favor of it."

Councillors Pam Williams and Fran Fitzgerald did not offer an opinion on the issue.

Borough finance manager Kyle Watts offered a possible figure of $3,250/year for each of the seven councillors and the mayor. (Note: The figure of $25,920 is obtained by multiplying $3,250 x 8.)

Borough manager Mark Stivers said he will collect information and survey surrounding boroughs to see what their compensation is. Current councillors would not benefit from a raise, since it would not take effect until 2022 - after the next election. At that time, only three councillors (new or reelected) would reap the reward, since the four newly seated councillors will not have finished their terms by then.
Posted by Joe Lintner at 6:22 PM

The mayor, hell how about he gives back, he tells people things and completely changes when another boro official over rides him, spine less shouldnt get a raise,