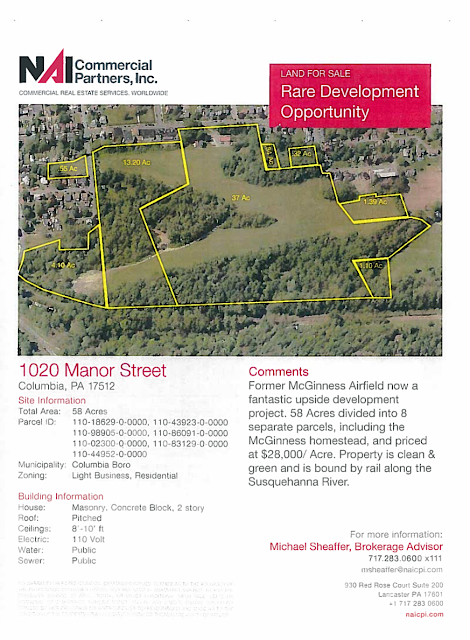 Columbia Borough Council approved a contract with a public relations firm this week to handle communications and information about a potential purchase of the McGinness property at 1020 Manor Street.

Gavin, a "public relations and communications services" firm, will "guide communication strategies" (according to their proposal) concerning the purchase of the 58-acre tract. (Currently, the property is not under agreement.) The 10-page contract proposal detailing the scope of services and pricing structure begins on page 25 of the meeting's council packet, which can be downloaded HERE.

At Tuesday night's council meeting, councilman Todd Burgard said the company will help the borough in "managing the message" regarding the purchase. Although it was not explicitly stated, that message might involve tamping down any possible controversy over a report about environmental/subsurface conditions at the site, which stems from a 2017 study. Although no definite plans for the property were announced, an item in the proposal mentions "drone innovation and investment."
Council vice president Sharon Lintner said she knew nothing about the Gavin proposal until she saw it on the meeting agenda. (The agenda lists the item as "11. b. Consider Contract for Communication and PR Support for the purchase of the McGinness Airport.") Council president Heather Zink suggested tabling the item, but after discussion the item remained, and council ultimately voted to approve the contract 5-2, with Lintner and councilman Howard Stevens voting against the motion.
This is not the first time the property has been under consideration by the borough. At the April 10, 2017 council meeting, the former council voted 5-1 to purchase the property but nixed the deal in July due to "environmental and/or subsurface conditions of the property." According to the minutes of the July 24, 2017 special council meeting, council approved the following motion 6-0 to void the agreement of sale:

[Note: At Tuesday's meeting, councilman Burgard insisted, without evidence, that the deal had been nixed due to price, not contamination.]

I was surprised at the lack of "transparency" at first then reality sunk in. This is how those in charge do such things. Obviously there were many discussions prior to having it put on the agenda between some people (are you listening Stivers, Burgard, Evan and others?).
Then council puts the cart BEFORE the horse by hiring a PR firm to disseminate a propaganda machine to sway public support to purchase a tract of land on the south side of the boro (assuming it is still in the boro limits) THAT THE LAND WAS CONTAMINATED without giving (to date) any specific intended use of that tract of land.
Come on council, these underhanded secretive tactics is VERY UNBECOMING of anybody but especially from any elected official! Stivers, you knew good and damn well about this plan and this is consistent with your history, which by the way isn't a sterling one. Then you say the $ is currently already available to the boro and us taxpayers are already paying interest on that $ so in your illogical reasoning it is better to spend it on something rather than just sit on it and continue to pay that interest without getting anything in return! How bout paying off our boro's DEBT instead of running millions in the RED? There's an idea!
I'm willing to bet the purpose will be to develope that land with "affordable housing" and sell or rent to poor unsuspecting buyers or renters that will have absolutely NO IDEA THIS LAND IS CONTAMINATED! Then when they or their children (currently born or even unborn) start having respiratory issues or are born missing limbs or two heads you people on council that voted for the PR and surely will vote to proceed with the purchase and developement will just say "too bad so sad we couldn't have foreseen that! WTF, really? How can you callous, uncaring bastards do that to unsuspecting people (probably of color) if YOU YOURSELVES would not want to live there?
Not saying that this IS THE CASE but I know human nature and I was correct about your handling of our fence issue and I am probably correct about this at least in part. If I am you SHOULD all be ASHAMED OF YOURSELVES and wi forever be remembered as those that caused birth deffects in our towns children thus causing increased costs to our school district.

So the boro wants to buy that there land? For what, an airport? low income housing? community gardens. Can someone in the know reply as to what the plans of Columbia boro intends to do with all that land??