Green Dreamz members and others marched from Locust Street Park to Columbia Borough Hall Tuesday evening to raise awareness and force change on issues such as social justice, racial inequality, and police brutality, among others. According to its website, the organization is:

"A Civil Rights Organization rooted in Lancaster. We are founded off of love and fighting against injustice and inequality. We are set to uplift, inspire, and rebuild communities for people of color through education and support! With physical demonstrations, including protests, marches, as well as events for and with the community. The funds donated to Green Dreamz will be used for supplying the community with food and resources, as-well as any necessities we will need for this revolution. This is just the beginning of the fight for change. The mission of Green Dreamz is to plant the seed of hope in a system built to destroy those of color.


A counter-protester walks behind.

Some ask why they are protesting in Columbia.  Here's one reason:

The comment above was posted on facebook recently by a Columbia resident
and appears to be in reaction to
recent protests in town.
The comment pleads for us all to stand together, yet there are still
whites-only clubs in Columbia - as evidenced by comments from other Columbians.
The above comment also urges us to say WE ARE....COLUMBIA!!!!!!
But who is WE?
How can there be a "WE" when Columbia is still not inclusive in all respects?


As the following comments show, Columbia still has work to do: 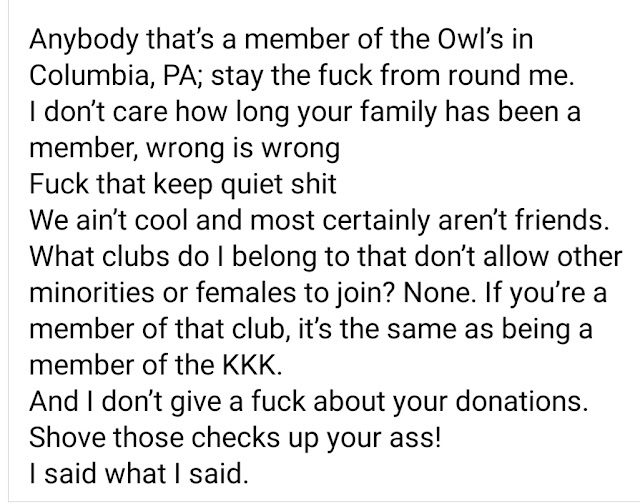 Some of Columbia's "ruling elite" belong to these clubs and yet say nothing.
"Silence is Compliance."