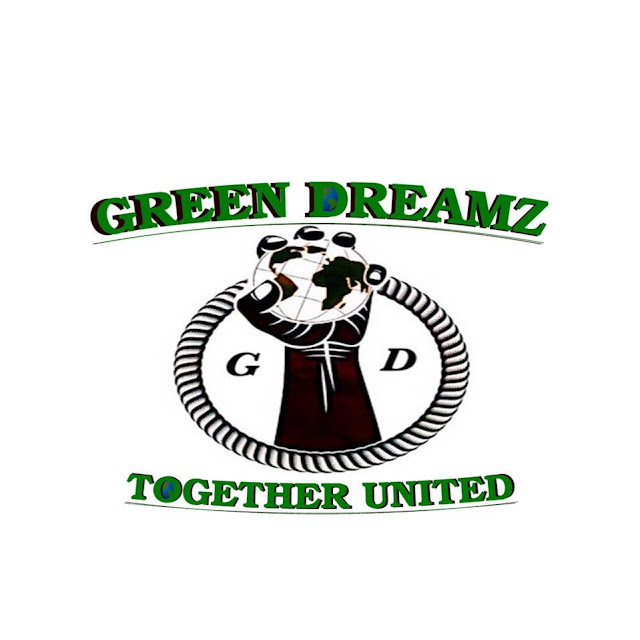 About 15 protesters (plus half a dozen legal observers watching from the sidewalks) marched through Columbia streets to borough hall on Tuesday afternoon in support of social justice and racial equality. With the help of a bullhorn, protesters chanted "question-and-answer" slogans to bring attention to those issues.

The group was part of Green Dreamz, a "BLM, Lancaster rooted organization. Founded off of love and fighting for injustice and Inequality for all POC," according to the group's Facebook page. Many from the group also attended Tuesday night's borough council meeting to voice concerns and make demands.

Earlier in the day, about 30 participants gathered at Makle Park to hear speakers and engage in activities. Several officers on bike patrol kept an eye on the group from behind the former Shawnee Fire Company on Union Street, while two ever-present drones hovered overhead. The drones were apparently directed from a command center at Holy Trinity Cemetery on South 9th Street, where 8 to 10 men in plain clothes scrutinized drone monitors. As the march proceeded, police officers followed the group to borough hall, while at least one officer filmed the participants. 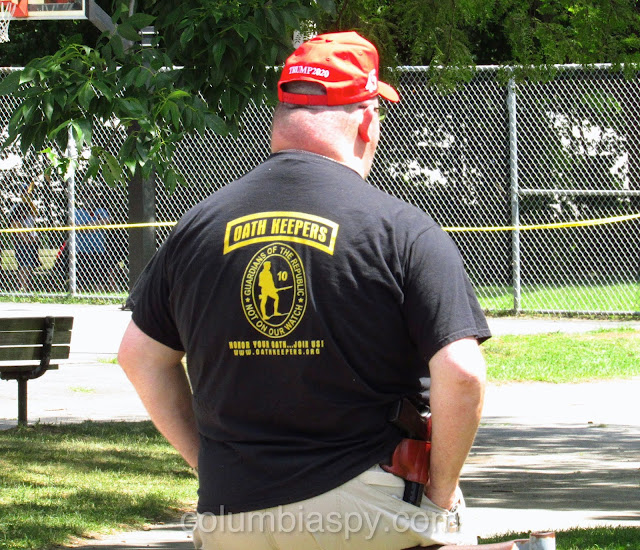 This man watched the group at Makle Park for most of the afternoon, occasionally engaging in dialogue with attendees. Note the firearm on his right hip. His shirt carries the name "Oath Keepers." According to Wikipedia, "Oath Keepers is an anti-government American far-right organization associated with the militia movement." According to the Southern Poverty Law Center, "The Oath Keepers, which claims tens of thousands of present and former law enforcement officials and military veterans as members, is one of the largest radical antigovernment groups in the U.S. today. While it claims only to be defending the Constitution, the entire organization is based on a set of baseless conspiracy theories about the federal government working to destroy the liberties of Americans." 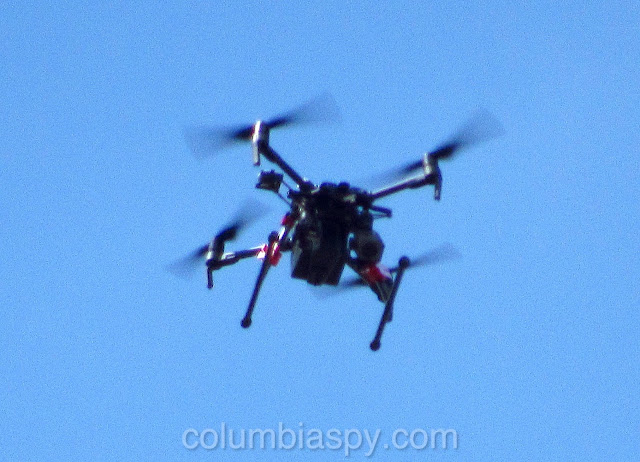 Shown above is one of two drones that continuously monitored the gathering at Makle Park. 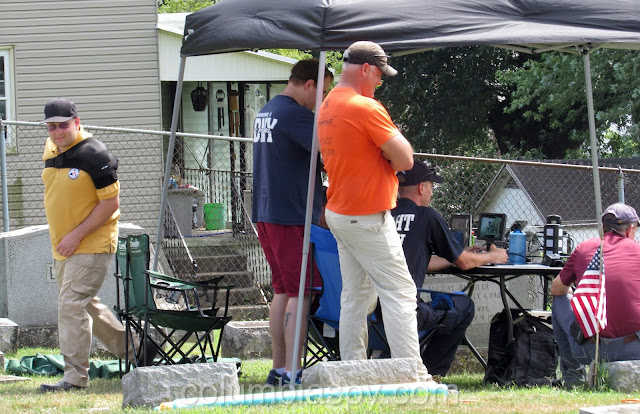 The drones appeared to be controlled from this command center in Holy Trinity Cemetery on South 9th Street. About 8 to 10 men in plain clothes were stationed there. 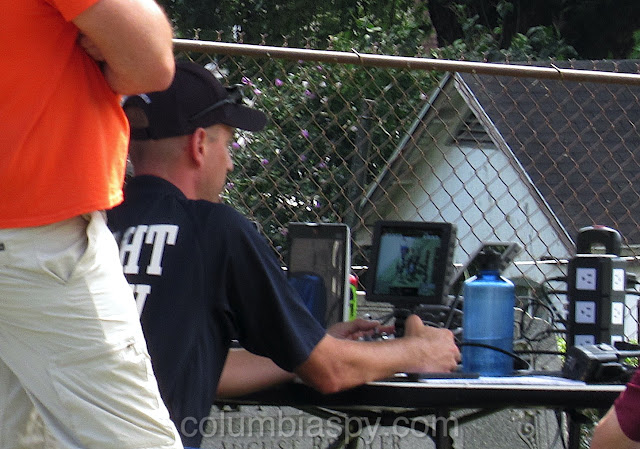 The man in the dark shirt appears to be controlling a drone while watching a monitor. 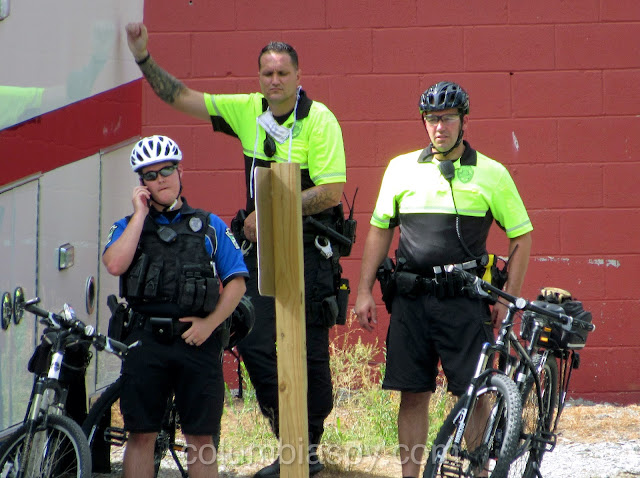 A bike patrol from Columbia Borough and another department watched the group at Makle from behind the former Shawnee Fire Company. About half a dozen officers on bikes were present during the day. 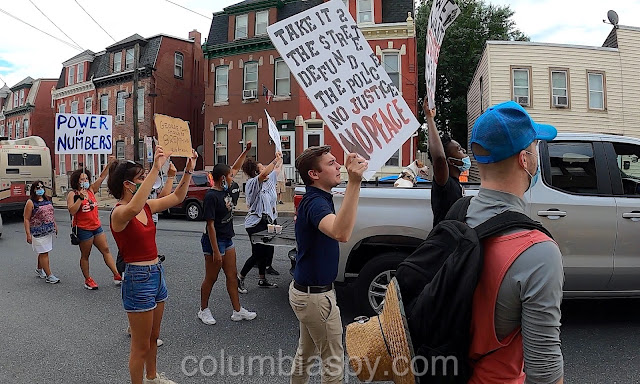 Protestors marched from Makle Park to borough hall at about 6:30 p.m. 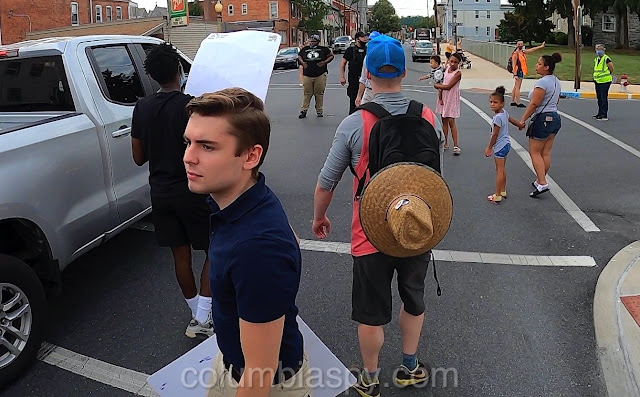 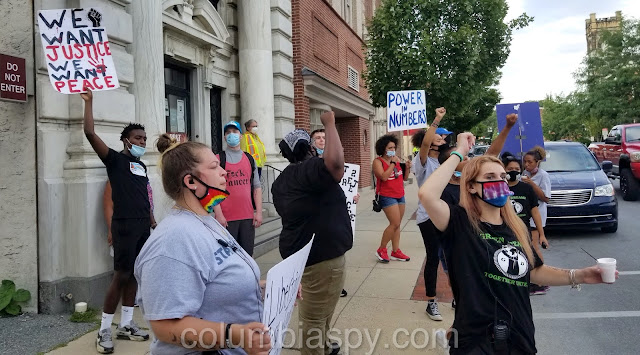 The group temporarily stationed themselves across from the police station on Locust Street before crossing. 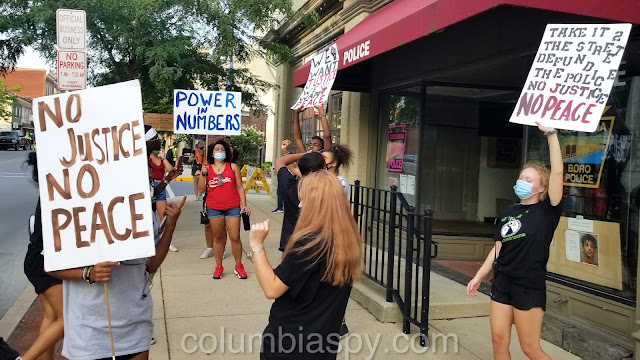 The group protested in front of the police station (above) before lying on the sidewalk (shown below) for 8 minutes and 46 seconds in observance of the amount of time that a Minneapolis police officer knelt on the neck of George Floyd, a black man, causing his death. 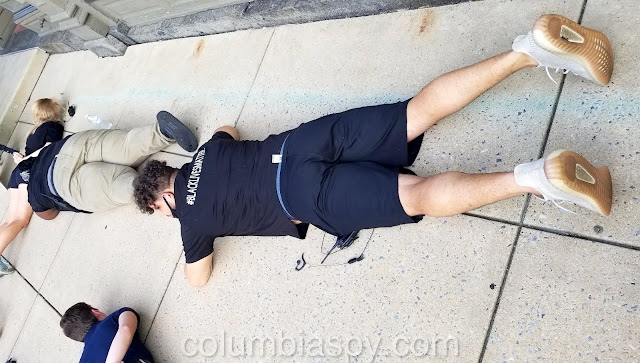 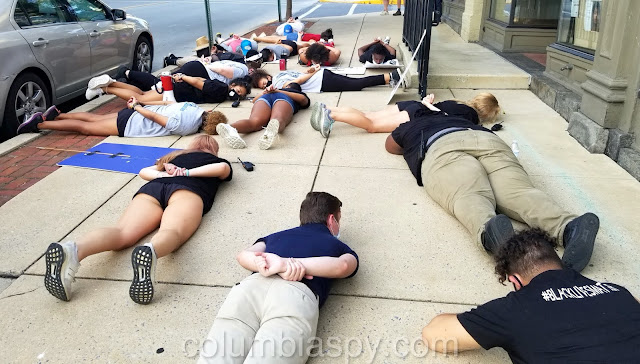 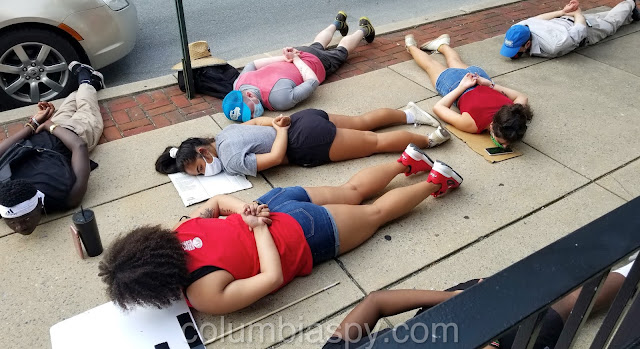 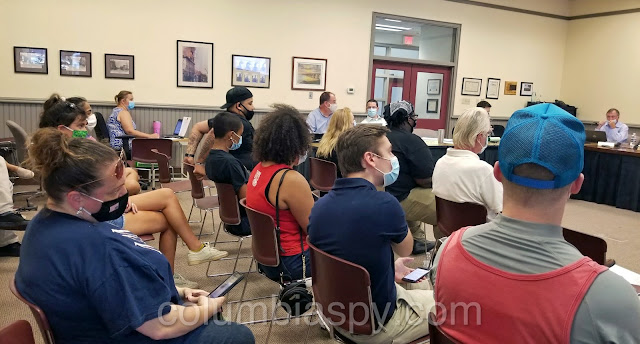 Many of the protesters attended the evening's borough council meeting to voice concerns and make demands and left shortly thereafter.

MORE DETAILS WILL BE POSTED TOMORROW.
Posted by Joe Lintner at 7:55 PM

Now this protest leader wants to move funds, and say how much money goes to police officers, but every time he protest, they have to pay more police officers to watch, guard, and protect the citizens,, i dont get we are cutting cost, with these protest???

Interesting the slant placed on the Oathkeepers. It is very clear where the writer's empathy and bias lie. Next time....try asking a person why they choose to counter the narrative, rather than make assumptions.