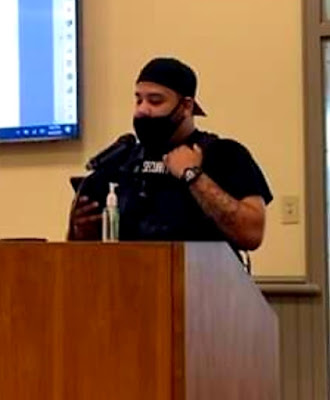 Carlos Jimenez, Jr. wants money to be taken from the Columbia Borough Police Department budget and used for other purposes in town. Jimenez, a Columbia resident and vice president of Green Dreamz, a Lancaster County-based civil rights organization, made the statement at Tuesday night's Columbia Borough Council meeting, where other members of the organization were present. Jimenez said the reallocated funds need to be directed towards affordable housing and public transportation.

"How does it make sense that this small town in PA spends more money per officer than the capital of this country when the capital has 6,996 violent crimes a year and we only have 19?" Jimenez asked. He subsequently demanded that $1.5 million from the Columbia Borough Police budget for 2021 be reallocated to affordable housing and public transportation for the community. He called for a decision on the changes by August 28, 2020 and demanded that the borough's plan concerning these demands be released to the public at a council meeting within the next three months.

"We expect the city to take this more seriously then they did the use of force policy which was heavily redacted and is quite honestly a joke," he said. Jimenez, the organizer of several recent protests in town, also accused officers of using unnecessary force and engaging in unjust treatment of people of color. "Change needs to happen and we're planning to see it here."


How much does the police department cost?

According to the Columbia Borough June 2020 Finance Report, the costs are as follows: 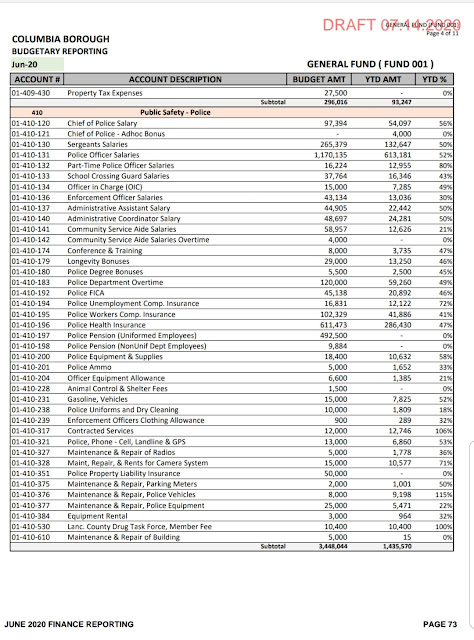 At a recent Columbia Borough Council meeting, councilman Howard Stevens stated that the cost of the police department is 107% of the annual municipal property tax revenue.

Affordable housing, i thaught half of columbia was affordable, there are plenty of cities towns and states to live in, please dont just pop up in a town and make demands, columbia doesnt need more low income housing, columbia needs apartments turned back into houses, and boom up the buisness district, lets put money into that, before making low income homes,,,

I agree. We need to raise property values not lower them with more low rent housing. That's the problem values too low taxes too high