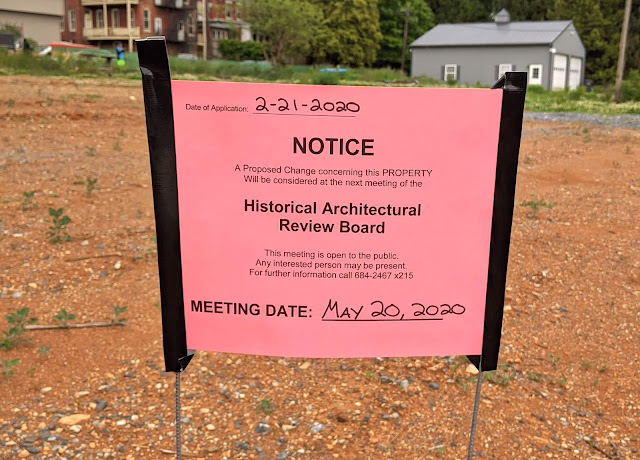 The photo of the notice shown above recently appeared at 134 Locust Street, a vacant lot at the intersection of Locust Street and Bank Avenue. The notice announces a May 20 meeting of Columbia Borough's Historic Architectural Review Board (HARB) to consider a proposed change to the property. The notice does not specify a time or address for the meeting, although HARB meetings are typically held at 7 p.m. on the third Wednesday of the month at the municipal building (308 Locust Street). No agenda or other information about the meeting appears on the Columbia Borough website or Facebook page, except for a legal advertisement dated 12/26/19 HERE.

The property in question is owned by Eberly Myers LLC (now 789 Main Street LLC), which had planned to construct a 4-story, 33-unit apartment building there before the project was postponed, reportedly due to a lack of funding. The company had requested $400,000 for the project from the borough's now-defunct revolving loan fund. At the borough's October 22, 2018 Finance Committee meeting, Benjamin Myers of Eberly Myers requested an increase from the original $400,000 to $650,000 and a change in terms for interest and principal payments due to increased costs of the project from $4 million to $4.8 million. The loan request was subsequently denied.

The company, which has now apparently obtained funding, is proposing changes in materials and design for the project, in a marked departure from the original plan. Those changes will be the subject of discussion at the May 20 meeting. HARB green-lighted the original design at its August 16, 2017 meeting by approving "Certificates of Appropriateness" for demolition and new construction. 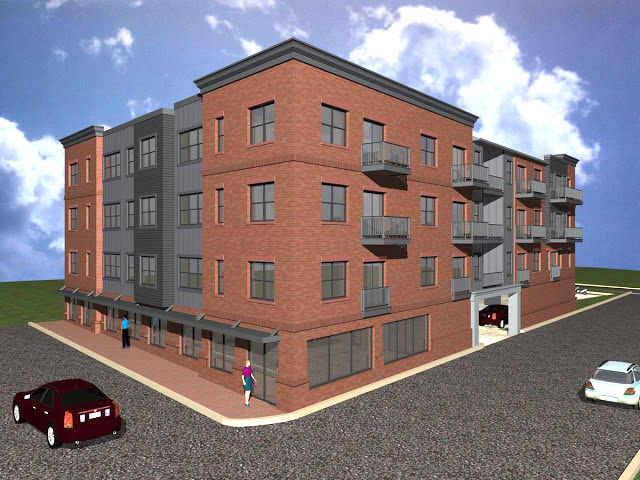 Previously proposed and approved design for the building