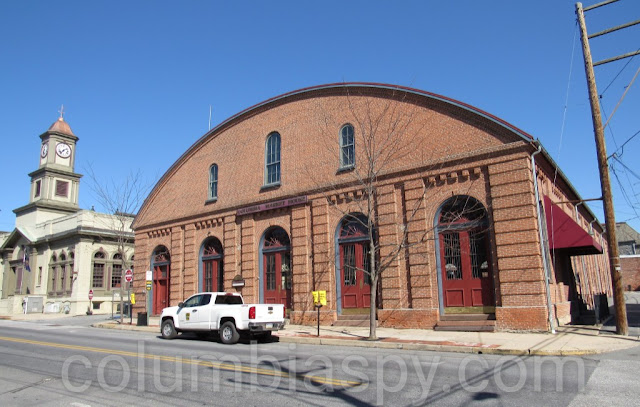 The Columbia Market House project has run into some unpleasant surprises on its journey forward. A leaky roof, leaky windows, a cistern, and upgrades for the dungeon are some of the issues that cropped up recently and were not part of the original renovation plan. Council now has to resolve those issues to keep the project on track.

The roof, which is a little over 10 years old, is leaking and needs urgent attention. Officials don't think it is under warranty. The roof was replaced in 2009 as part of an $873,928 market house repair project that included repointing of exterior mortar joints and installation of an infrared gas heating system, according to a former borough official.

Council is looking at several options including a rubber roof and spray-on coating. The entire roof could be replaced or just parts of it. No cost was given for any of the options. Although roof replacement was not in the plans, the leaks have been known about for several years, at least since "the market was still kind of operating," according to Mayor Leo Lutz at this week's borough council work session. [NOTE: The market house closed at the end of 2017, as Columbia Spy reported HERE.] Lutz recalled that trashcans had to be placed under leaks during a heavy rain. Council President Heather Zink asked, "If we knew it was leaking, why wasn't it put into the original plans?" Lutz replied, "That I can't tell you." The roof project might also entail installation of new gutters and downspouts. Windows, too, are leaking and need to have caulking removed and replaced.

Fran FitzGerald, the lead councillor of the Public Works and Property Committee, said the dungeon will need upgrades to bring it up to code, including an exhaust fan for better ventilation, a new circuit for lights and convenience outlets, new fire extinguishers, an inside door requiring a crash bar, and exit and occupancy signs.

FitzGerald also said that an existing concrete slab near the bathroom needs to be removed. Although installation of a new slab was accounted for in the plans, the removal was not. The cost for removal was initially estimated at $27,000 but was reduced through negotiation to $8,421.18. Councillor Eric Kauffman said that since the architect was paid to develop the contract, the borough should not be responsible for the oversight. "Why are we paying for it?" he asked.

Borough Solicitor Evan Gabel replied, "In situations like this, you've got to think long-term about some of this stuff, as far as you're going to have to work with this architect for the remainder of this project." [NOTE: The opposite is also true.] Gabel continued, "If an $8,000 change order is the worst thing that happens on a $2.3 million dollar project, then you're doing pretty good."

The borough currently has an "owners allowance" of $25,000, which is a contingency fund for unforeseen issues, often involving change orders. Gabel said $250,000 would be more appropriate for a project of this scale, however, noting that $25,000 seemed small. After discussion, council voted unanimously to approve the change order for East Coast Contracting to remove the slab. Finally, a cistern located near stairs to the dungeon must be filled in. The cistern is five feet wide and nine feet deep. The highway department will provide fill.

On the advice of the borough engineer, council discussed forming an ad hoc committee to examine peripheral projects such as improvements to adjoining streets, parking lots, and sidewalks, and gutters and downspouts for Borough Hall. The committee will consist of representatives from the borough and CHI.

Costs of the changes and improvements were not discussed, except for that of slab removal. The projected cost of the market house project is about $2.1 million, with half coming from a state grant (RACP) and half from borough funds (bond proceeds). Columbia Borough was approved for the $1.75 million grant in August 2019. About $750,000 of that amount will be used for parking projects (including a study). According to the Lancaster County Tax Assessment Office, the market house building is currently assessed at $301,400.

Why doesnt the public works remove the slab?