What's up with that mural in the Columbia Post Office? Here's the story

Did you know the mural in the Columbia Post Office lobby was commissioned by the U.S. Department of the Treasury? It's true! 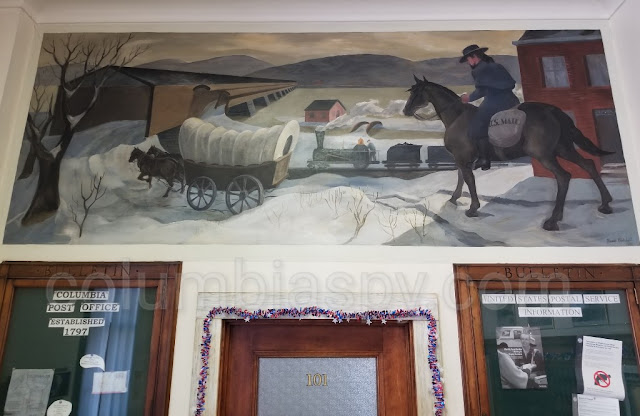 "Columbia Bridge" by Bruce Mitchell is displayed at the Columbia Post Office.

The painting "Columbia Bridge" by artist Bruce Mitchell was commissioned by the Treasury Department's Section of Painting and Sculpture (later named the Section of Fine Arts) in the 1930s. "The Section," as it was known, funded such murals as part of the cost of new post office construction, with 1% set aside for artistic enhancements. Mitchell completed the oil-on-canvas painting in 1938, three years after the completion of the post office at 53 North 4th Street. The canvas is attached to the inside north wall of the post office, just above the door to the postmaster's office.

The mural depicts 1850s Columbia Borough and shows a man astride a horse, carrying a bag marked "U.S. MAIL." The horse and rider are positioned before a red building, presumably a post office. A Conestoga wagon pulled by two horses is about to enter a covered bridge via a snow-covered road. A small train is also about to enter the bridge, on an attached side structure. In the center of the painting, a small footbridge connects to an islet containing a small red building. Government authorities initially thought the rendition of the bridge was inaccurate, but the artist prevailed despite the criticism. Mitchell noted that the bridge was the longest such structure in the world at the time. The bridge depicted is almost certainly the second Columbia-Wrightsville Bridge, which was completed in 1834 and burned on June 28, 1863 during the Civil War. [The actual bridge piers can still be seen today, just north of the Veterans Memorial Bridge.]

Unlike other New Deal programs such as the Works Progress Administration (WPA), the mural commissions were not a relief program but were selected from the winners of national and local art competitions. Almost 850 artists were commissioned to paint 1,371 murals, most of which were installed in post offices; 162 of the artists were women and three were African American.

Artists were asked to paint in an "American scene" style, depicting ordinary citizens in a realistic manner, and were encouraged to produce works appropriate to the communities where they were to be placed while avoiding controversial subjects. The murals were intended to boost the morale of Americans enduring the Great Depression by depicting uplifting subjects. Some people objected to the murals, however, believing the very idea was communist, because Soviet Russia was also making them at the time.

More than 1,200 original works of art were commissioned for post offices nationwide. Of those, 88 were in Pennsylvania and about 80 survive today. Of the original 88, about half were sculptures. Murals were usually painted on canvas but sometimes as frescos. Pennsylvania has the second largest number of such murals, behind New York.