Columbia's "Returned Soldier" has a twin brother in New York 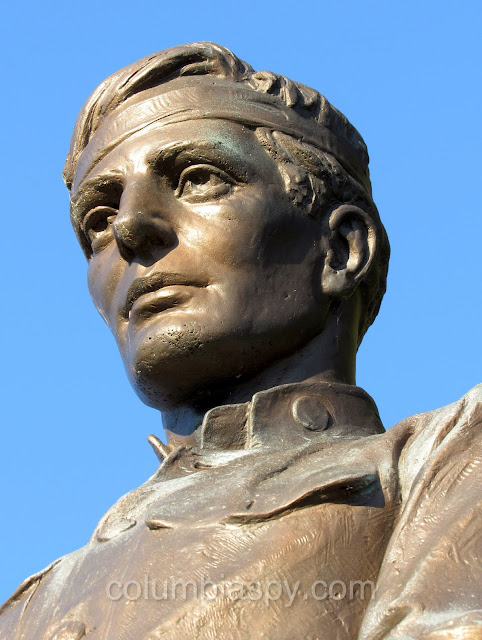 Did you know that "The Returned Soldier" in Locust Street Park has a twin brother? It's true!

An identical statue, called "The Woodside Doughboy," stands in Doughboy Plaza in Woodside, Queens, New York. The design was created by sculptor Burt W. Johnson and was dedicated on Memorial Day 1928, a decade after the end of World War I. The New York statue is the original. Columbia's is a replica. 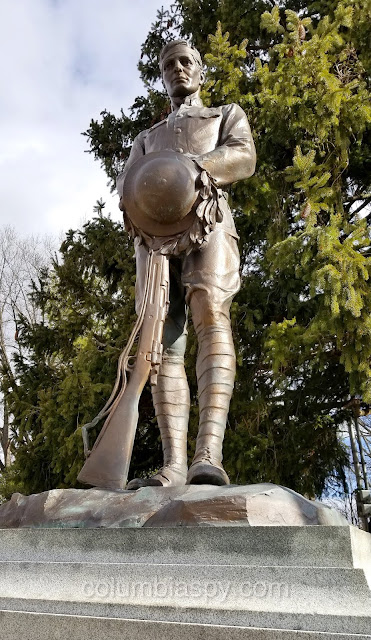 Columbia's statue (above) is a replica of one that stands in Queens, NY. 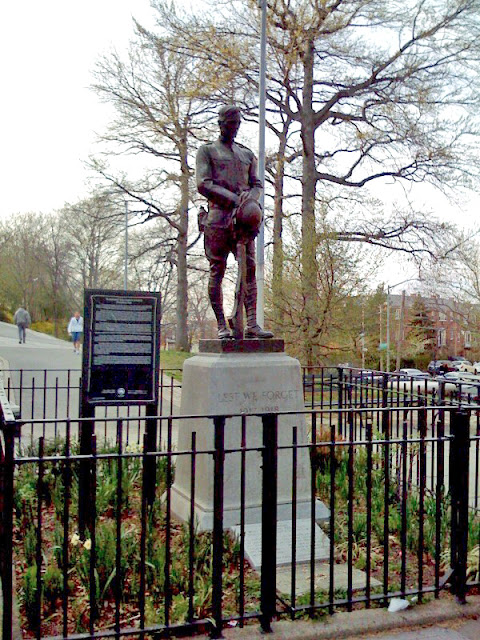 The original (shown here), known as "The Woodside Doughboy, stands in Woodside Plaza," in Woodside, Queens, NY.
(Photo by Cmprince, posted on Wikipedia)


Here's the backstory: The New York monument was commissioned by the Woodside Community Council at a cost of $5,000 after Johnson's concept took first prize in a war memorial competition. The purchase contract included a stipulation that a copy would never be made or sold.

However, Columbia wanted a war memorial of its own. After scouting around and discovering Woodside's monument, a Columbia memorial committee contacted the sculptor's widow, Ottilie Johnson. [Burt Johnson died on March 27, 1927.] The committee explained that it was impressed with her husband's work and persuaded her to contact Woodside officials and revisit the contract.

With its payment of $1,000 to Woodside, the committee obtained permission to have a duplicate made for Columbia, thanks to Mrs. Johnson. In an agreement with Johnson, the committee contracted the Roman Bronze Company [now operating as Roman Bronze Studios] in Corona, Queens, NY to cast the replica.

As the statue was being cast, a financial committee collected funds for the work and "the citizens of Columbia responded loyally," according to a newspaper report. The total cost was about $6,000. 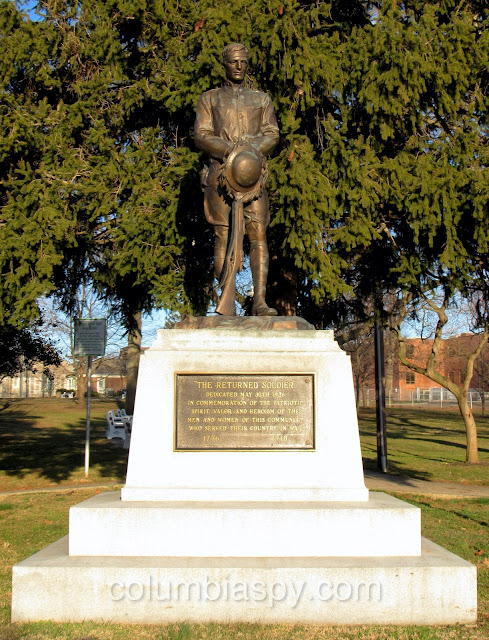 The base was erected by Charles W. Knipe, who traveled to Vermont to select the stones.

The base was erected by Charles W. Knipe, then proprietor of Columbia Memorials. Knipe made a special trip to Barre, Vermont to select the stones. The base is reportedly nine feet thick and weighs 33 tons.

The monument was dedicated as a "Memorial to All the Wars" at a 4 p.m. ceremony on Memorial Day 1928. Over 3,000 people from all parts of the county attended, including veterans of the Civil War, Spanish-American War and World War I. It was the first permanent memorial to be placed in Columbia.

In 1928, the American Federation of Arts selected the Woodside Doughboy as the best war memorial of its kind, an honor that could also be bestowed on Columbia's "Returned Soldier." 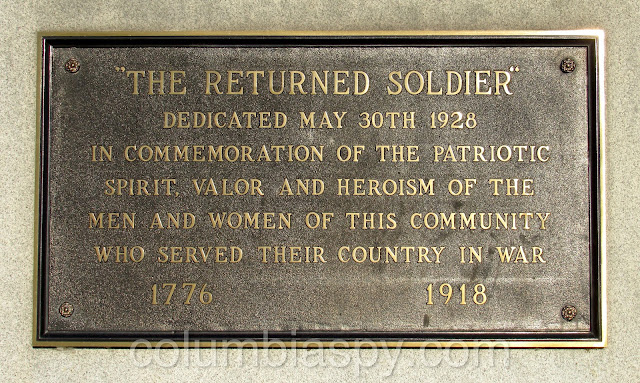 Plaque mounted on the front of the base 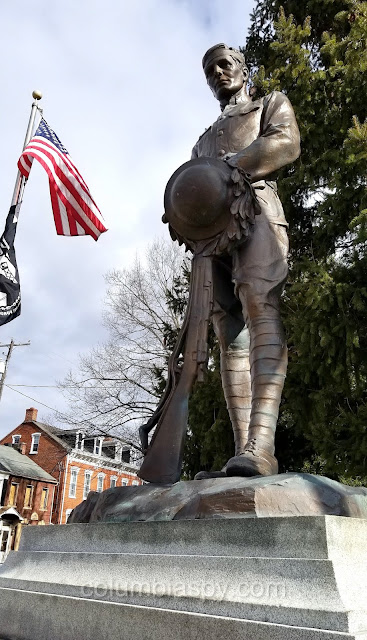 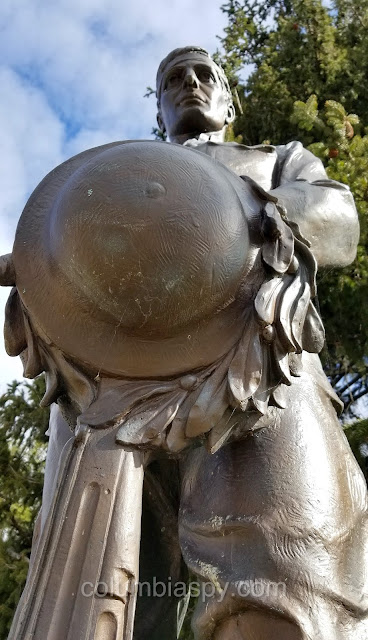 Behind his helmet, the soldier is holding what look to be olive branches, a symbol of peace since ancient Greece. 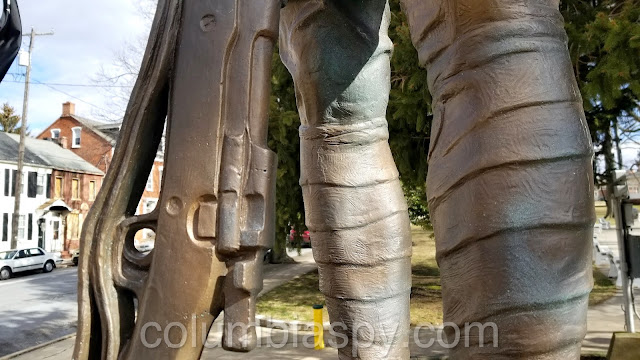 Detail of rifle and leggings 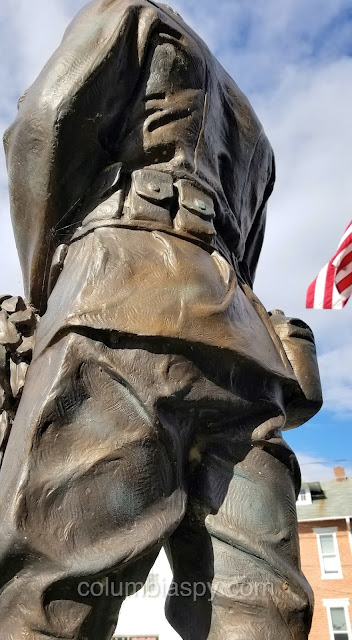 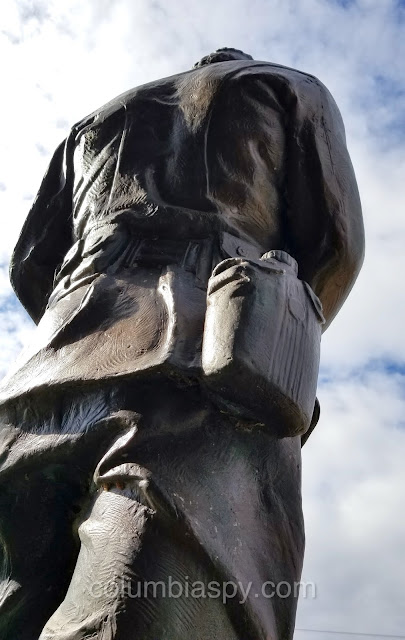 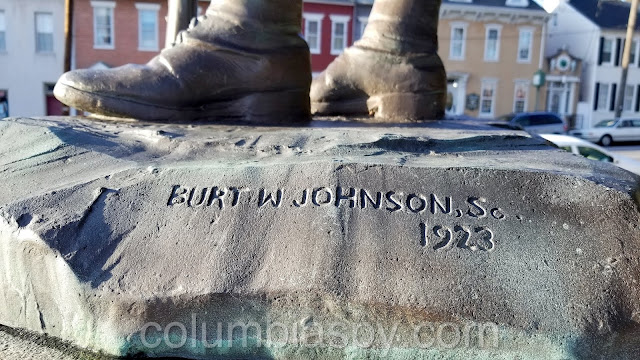 Inscription of the sculptor's name and the date the original sculpture was cast. 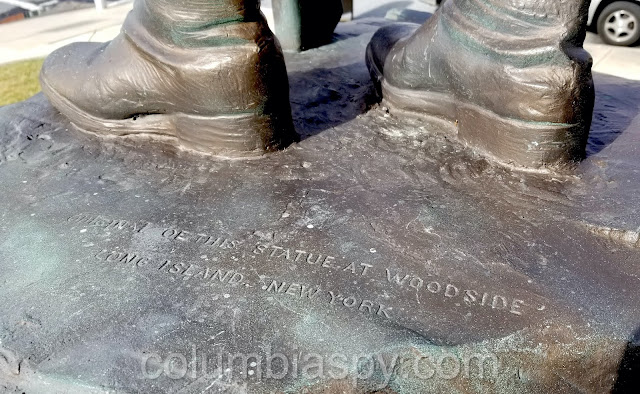 This inscription on the base appears to read: "ORIGINAL OF THIS STATUE AT WOODSIDE LONG ISLAND NEW YORK"
However, the word "OF" is spelled "OE" an abbreviation used by artists to designate an "open edition." 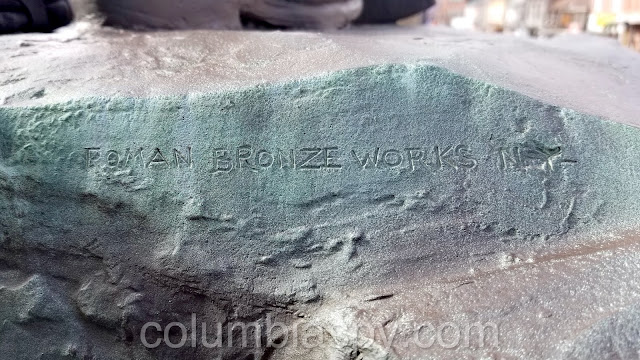 This inscription reads: ROMAN BRONZE WORKS NY"
The replica was cast there. 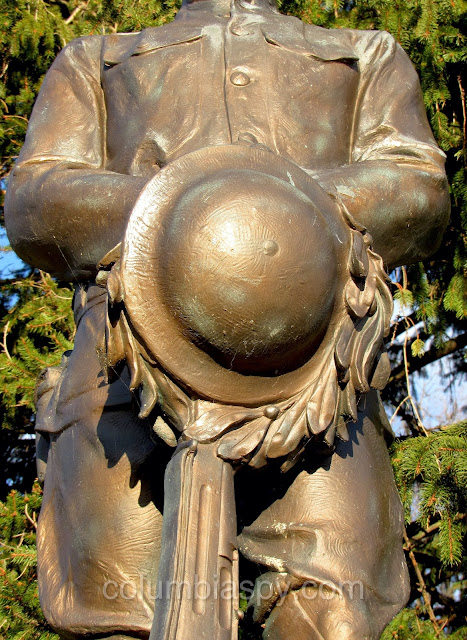 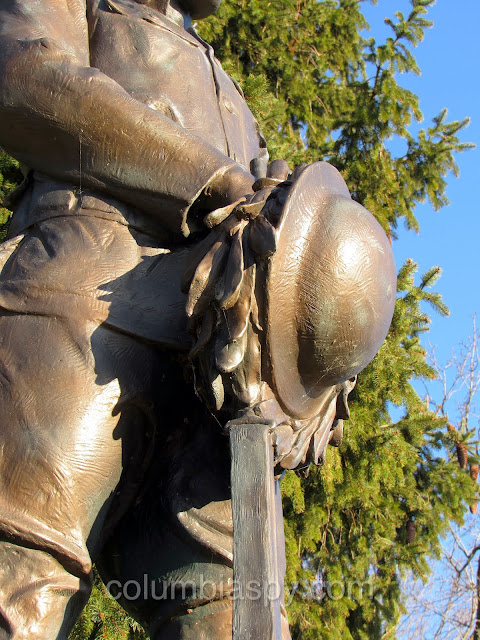 Side view of helmet, branches, and rifle 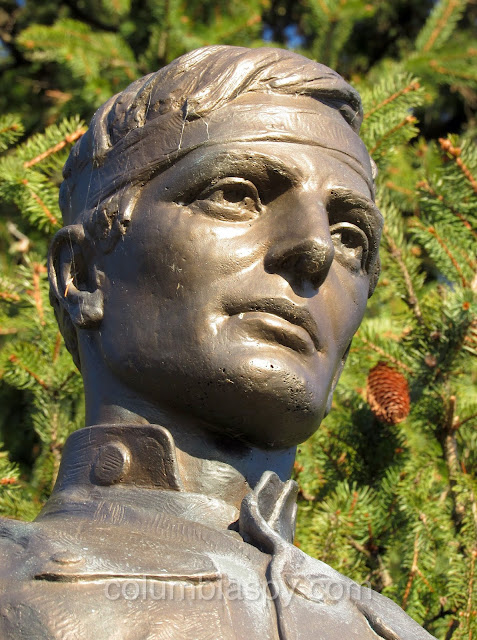 The soldier has a war-weary look. His head is bandaged and his eyes convey a thousand-yard stare. These features and the olive branches inside his helmet suggest the sculptor intended this statue as a tribute to soldiers of all wars but also as an anti-war statement. 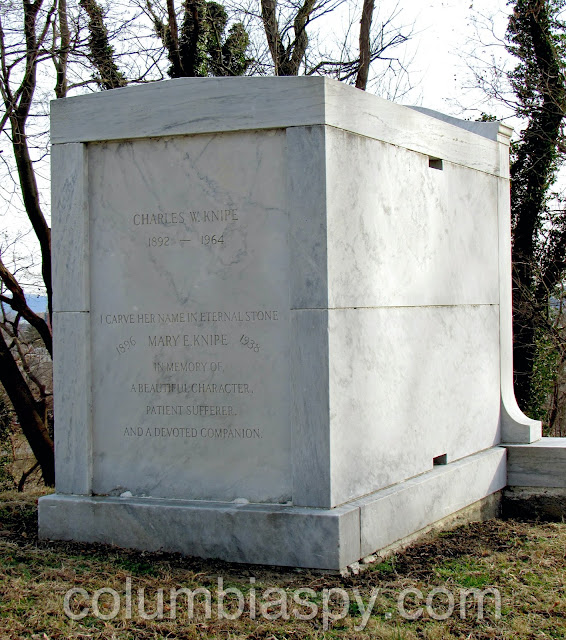 The crypt of Charles W. Knipe and his wife at Laurel Hill Cemetery. Knipe oversaw the creation of the base for "The Returned Soldier" memorial.

More information can be found in the following clippings which were used as source material for this article. The clippings are from the Lancaster Newspapers archive. 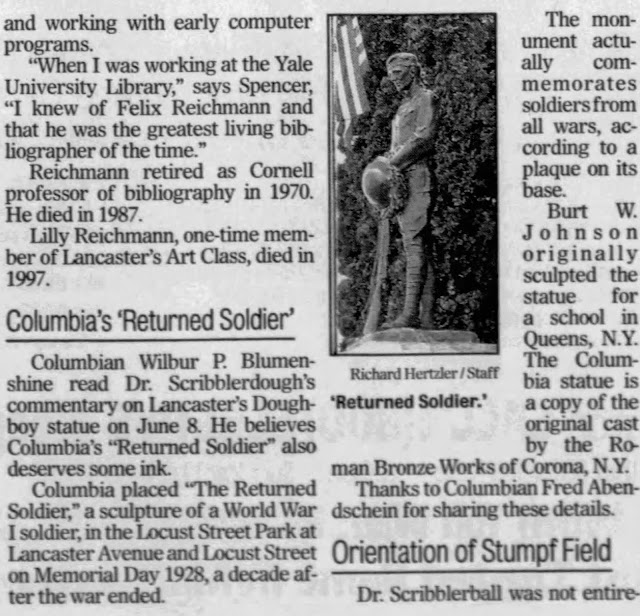 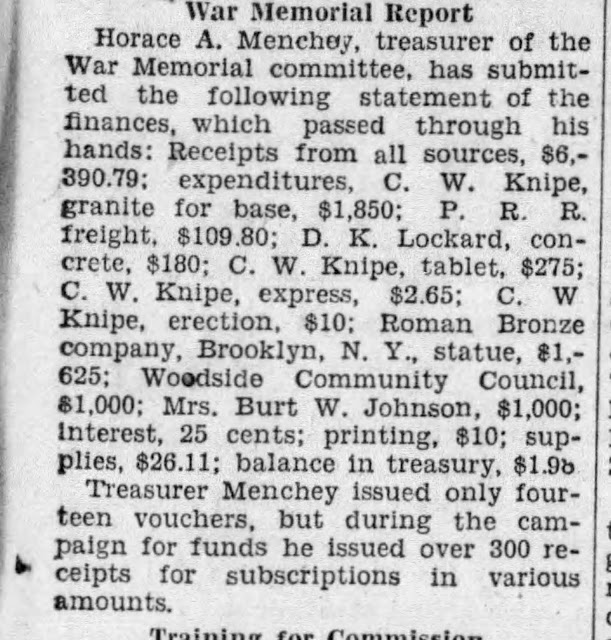 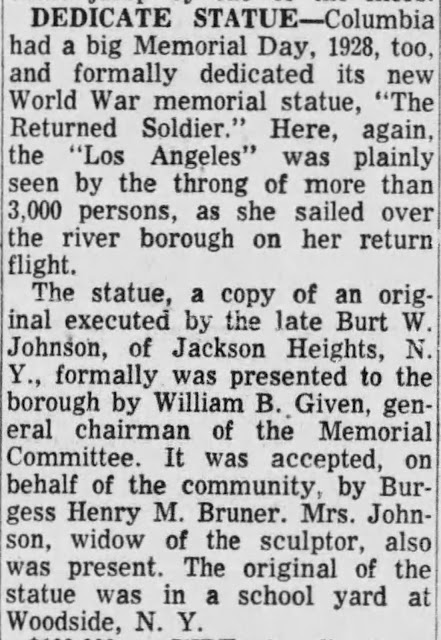 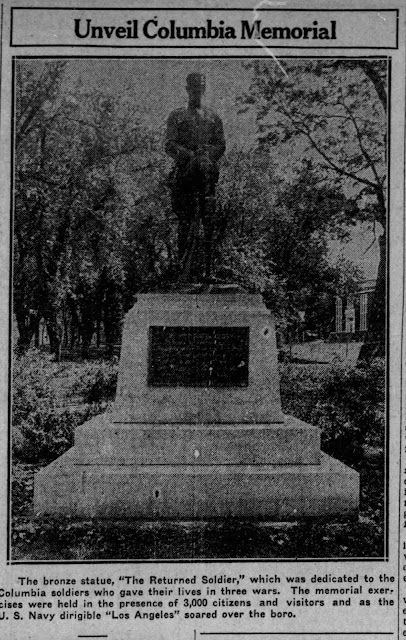 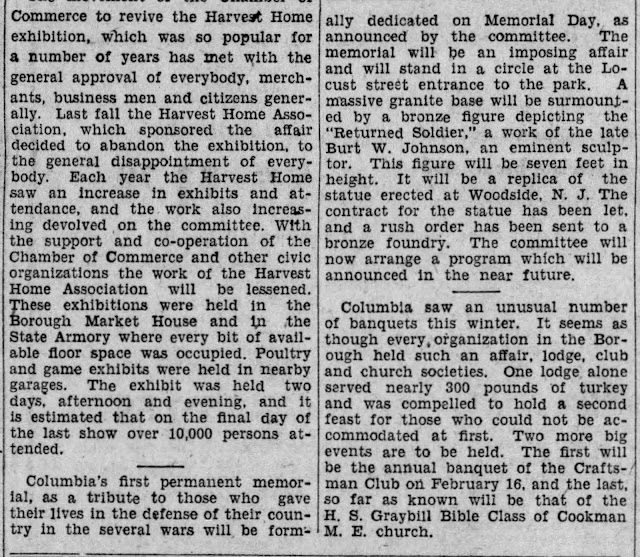 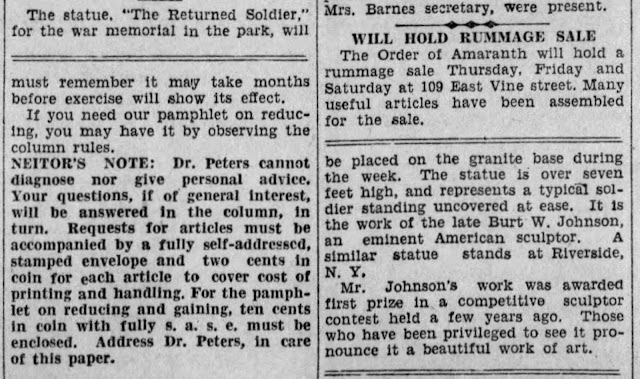 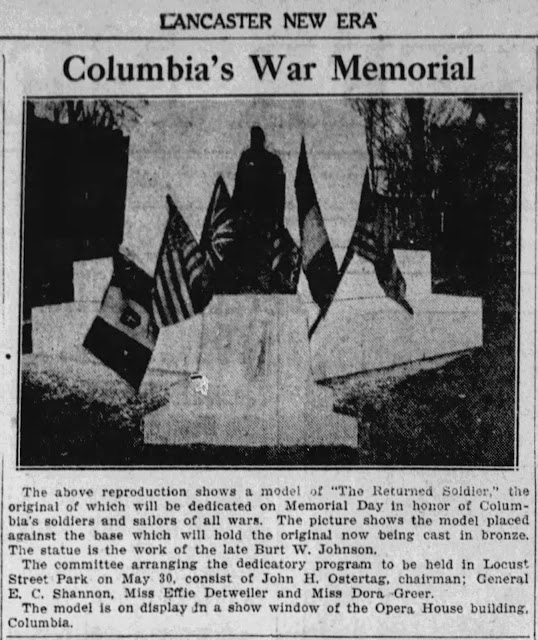