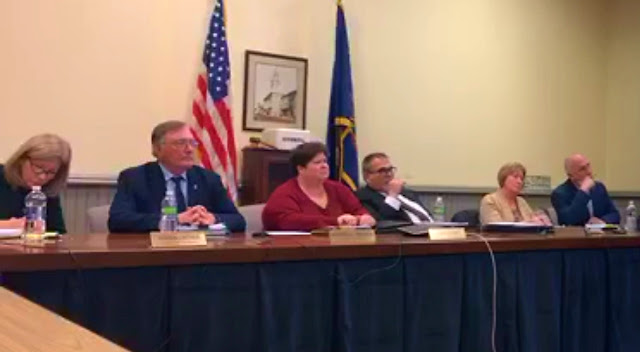 Councilwoman Pam Williams once again "attended" the meeting via phone, as she has done regularly since the January 14, 2020 meeting.

Early in the meeting, it became apparent that the livestream would be a problem. The picture was tilted about 90 degrees from horizontal, and the sound quality was poor, according to online comments. The borough manager typically operates the phone providing the livestream. However, Interim Borough Manager Candie Johnson's contract ended last week and she was therefore unavailable.


Council unanimously voted in Mark Stivers as Columbia's new borough manager, with a start date to be determined, but Council President Heather Zink said he could possibly start on March 30. Stivers will receive an annual salary of $90,000. (By comparison, former borough manager Rebecca Denlinger started at $95,000 when she took the reins on January 1, 2018.) In the meantime, Columbia Borough Police Chief Jack Brommer will serve as interim, overseeing office staff and day-to-day operations.

The controversy surrounding Johnson's abrupt exit evaporated quickly when Zink, solicitor Evan Gabel, and Mayor Lutz described council's decisions last week essentially as administrative actions. The issue remains confidential since it relates to personnel. Resident Frank Doutrich was adamant about learning the terms of the contract, however, and offered any member of council $100 if he or she would read the contract aloud at the meeting. None of the councillors took him up on the offer.

It was announced that the balance of the $250,000 from the borough's Revolving Loan Fund was paid off recently. The money has been returned to the general fund and will show up on the February financial statement, according to Zink. Councilman Eric Kauffman read a prepared statement about the benefits purportedly achieved through the loan. Kauffman suggested the loan spurred multi-million dollar investments in the borough but gave little or no substantive evidence for his claim.

And finally, we learned there's an old adage that says: "Columbians love their town but hate each other."