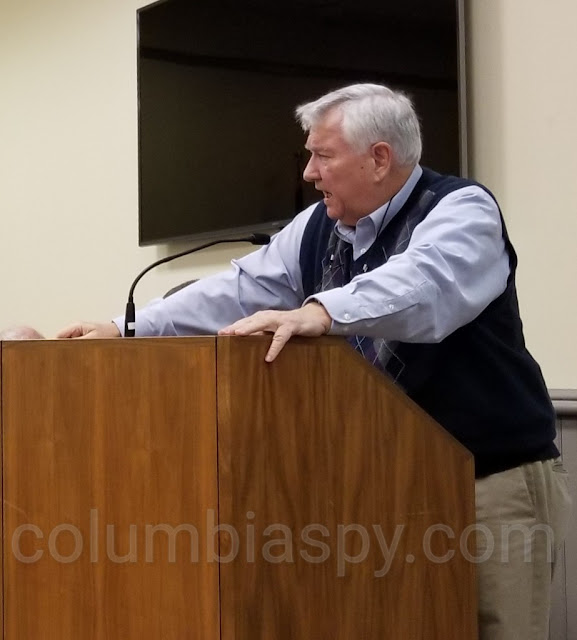 Former Columbia Borough Manager Norm Meiskey scolded borough council Tuesday night for its failure to reopen the borough budget and accused members of "kicking the can down the road." The current budget, which Meiskey said contains $870,000 in planned overspending, was passed unanimously by former council members, three of whom still sit on council.

Last year, citizens voted out a councilman in the primary election and the council president in the general election over concerns about overspending and lending taxpayer money to private business. Four new members [Kauffman, Lintner, Stevens, Zink] who promised fiscal responsibility were voted in. [Council Vice President John Novak and Councilwoman Marilyn Kress Hartman had finished their terms on December 31, 2019, having chosen not to run again.]

Meiskey said he had submitted his resume in response to an opening for an interim borough manager but decided not to interview after council's 5-2 vote against reopening the budget. "I cannot possibly work with a council that leaves an atrocious budget plan - particularly the general fund with $870,000 in planned overspending of revenues and onerous taxation of property owners - in place for 2020," Meiskey said. "Immediate corrective action was required, but the can was kicked down the road." He noted that council had overspent by almost half a million dollars in 2017, and over $2 million in 2018.

Meiskey also faulted council on its hiring process, which he believes is improper. "Putting EEO on an advertisement does not mean you're an equal opportunity employer," he said, noting that three positions filled in 2018 were not advertised. He also pointed out that in considering a borough manager or interim, veteran's preference under state and federal law and protected classes must be taken into account. Meiskey said he could have personally filed formal complaints about the three hirings but chose not to, because taxpayers would end up paying the fine. He added that the hiring process involves mitigation of liability, which is the responsibility of the borough manager and solicitor so that the borough is not put at any kind of risk, particularly violations of federal and state law or EEOC requirements.

In a barb aimed at departing borough manager Rebecca Denlinger, Meiskey said he hopes the the new borough manager that's hired is somebody with experience because "We had somebody who was grossly inexperienced." He added that the borough manager has the necessity of handling a whole host of matters, not the least of which is budgets, trying to control spending and mitigation of liabilities - and steering the ship in the right direction.

[NOTE: A previous version of this article stated that the council vice president was voted out in last year's elections. That was incorrect. The vice president, John Novak, completed his term on December 31, 2019, having chosen not to run again. That change has been incorporated into this article.We apologize to Mr. Novak and our readers for the error.]