What you should know before voting on Tuesday

Some Columbia Borough officials would have you believe that the borough is on the upswing. Unfortunately, that's not the case. In fact, borough council has overspent its budget over the last several years and continues to do so.

As you can see on the graph below, expenditures have exceeded revenues for the past few years. If this continues (and it appears to be), a huge municipal tax hike (31%) is in our future. 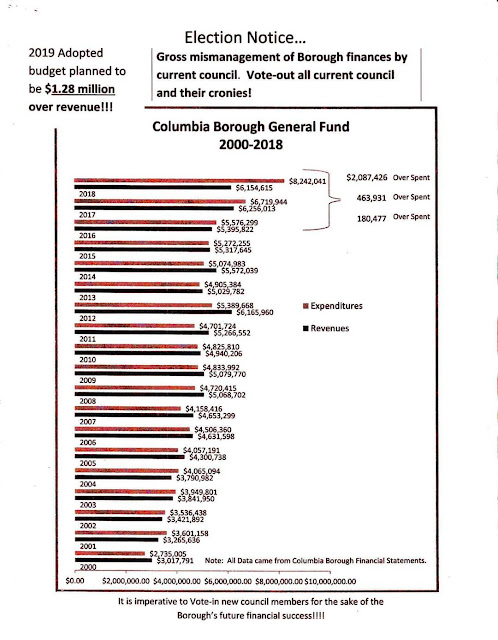 The figures shown above were taken from the borough's own audit reports compiled by Sager, Swisher & Co.

This recent LNP article states that the borough might narrowly avoid a 31% municipal tax hike this year. To do this, they will have to take more than a million dollars (over 50%) from reserves. If this rate of overspending continues, a tax hike will be inevitable by the end of next year due to overspending. Borough council, led by President Kelly Murphy, passed a 21.2% tax increase for this year. Murphy and Cleon Berntheizel have been chair and vice chair, respectively, of the finance committee for the past several years. 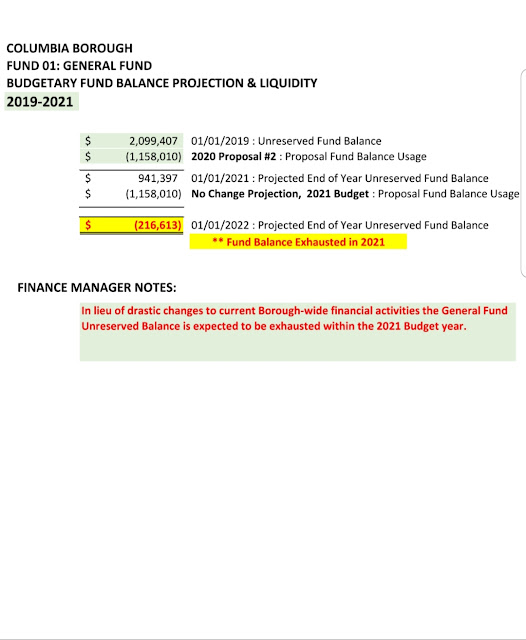 Here is a warning from the borough's finance manager, taken from the October 10, 2019 budget meeting. It states that the fund balance will be exhausted in 2021.

The link I've included below includes a recording and transcript of Borough Manager Rebecca Denlinger warning (and slightly scolding) Council President Kelly Murphy about overspending. She warns him that the borough is spending beyond its means and asks him if his plan is to just keep taking from fund balance and then hike taxes "a whole bunch." 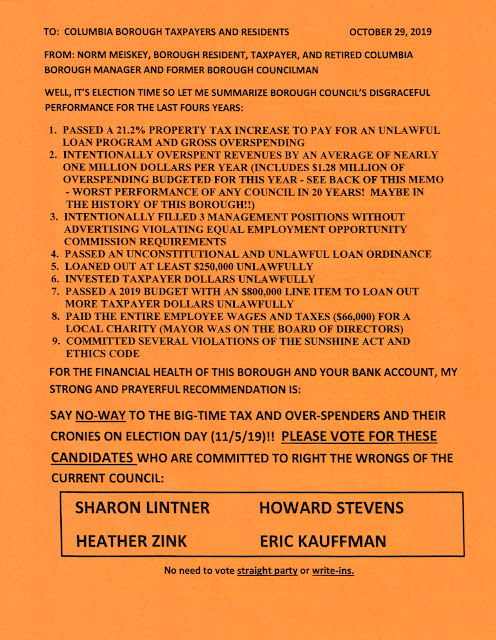 Meiskey has also addressed council about overspending and other issues HERE, HERE, and HERE.  Unfortunately for borough taxpayers, council ignored his advice and passed a 21.2% municipal tax increase for 2019. 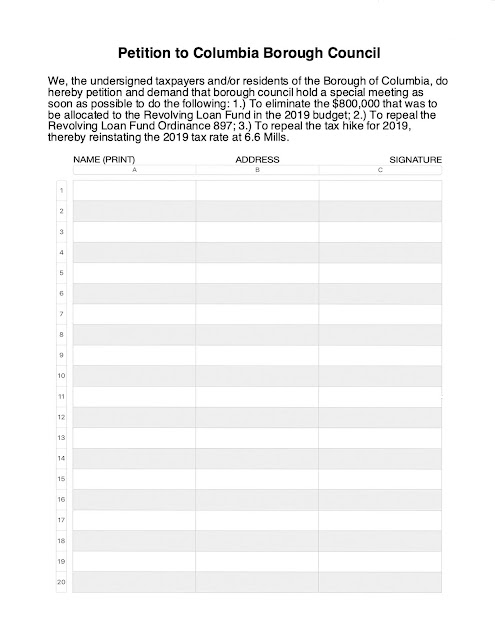 Signed petitions were presented to council members, but council did not schedule a meeting with taxpayers. Subsequently, taxpayers held several meetings/petition drives of their own to continue collecting signatures and discuss issues.

At a regular borough council in January of this year, council dismissed the petitions, thus ignoring the stated demands, as Columbia Spy reported HERE.

In response, taxpayers formed the Columbia Concerned Citizens Association (CCCA), which filed a lawsuit against the borough to repeal the Revolving Loan Fund and tax increase. The fund was created to loan taxpayer dollars from the general fund to private business. Even though the borough's auditors warned that the funds could not be used in this manner, council went ahead anyway. Due to pressure from the CCCA, the borough finally relented and repealed the loan fund. The tax increase remains in place, however. The loan fund's $800,000 balance was transferred to the borough's general fund a few months ago.

Yeah.... That would fix everything