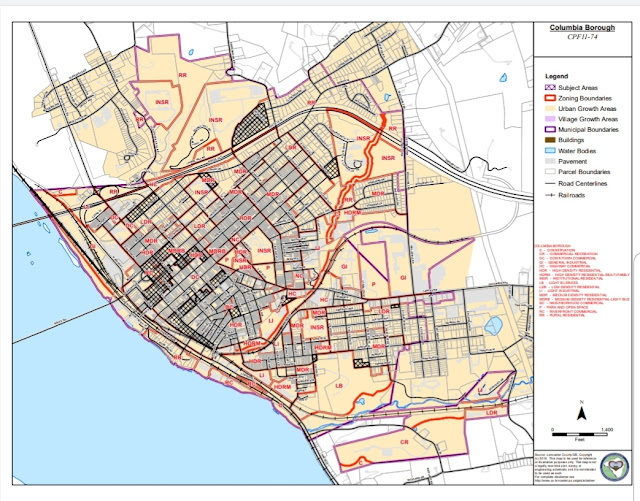 According to sources:
At its November 25 meeting, the Lancaster County Planning Commission (LCPC) approved Columbia Borough's rezoning proposal by 6-1, with commission member Edward Fisher being the only no vote. The proposal will rezone about 300 Columbia properties to commercial.

Fisher said that in all his years he has never seen such an enormous rezoning proposal. He also said that it was putting the cart before the horse in that Columbia does not have a final comprehensive plan but is requesting rezoning. In essence, Columbia Borough is asking for a large area to be rezoned before a plan is put in place. Areas will be rezoned to commercial with no finalized comprehensive plan. The proposal includes 55 acres of McGinness's property that is now changed to redevelopment.

A member addressed a comment to Columbia Zoning & Planning Officer Jeff Helm and Columbia Planning Commission Chairperson Mary Wickenheiser and encouraged them to hold at least two meetings, specifically to discuss the changes. Residents asked LCPC to table any recommendation, but the commission stated that it couldn't do that and was basically approving the review done by Proctor, who attended several Columbia Borough Planning Commission meetings this year and helped formulate a proposal with Wickenheiser and Helm.

During a subsequent phone conversation with Brown, Columbia Borough Zoning and Planning Officer Jeff Helm reportedly said that Columbia's Historic Architectural Review Board (HARB) will not have any say in the decision for in-home businesses. “Their role will only be with architecture and color,” Helm said.

LCPC's role is to approve, providing municipalities follow certain guidelines. It cannot postpone, recommend, or ask for any revisions. All power, control, and final decisions will ultimately be made by Columbia Borough Council.

The zoning meeting scheduled for Wednesday, November 27, is a public hearing regarding variances and special exceptions for the chip factory hotel. This meeting does not relate directly to the borough-wide rezoning. That issue will be addressed at the December 16 meeting (7 p.m. at the District Administration Center) and will be voted on by Columbia Borough Council. However, all citizens concerned about rezoning should attend Tuesday night's borough council meeting at Borough Hall (November 26 at 7 p.m.) to speak out or ask questions.