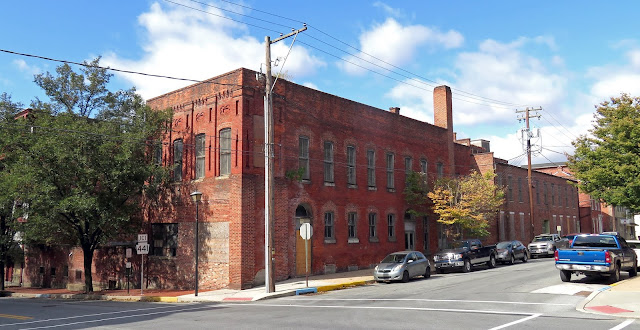 Cimarron Investments LLC took the next step in developing a six-story, 91-room hotel on the footprint of the former Becker Potato Chip factory, when the Columbia Borough Planning Commission recommended granting several requests for variances. The matter now goes to the borough's Zoning Hearing Board. 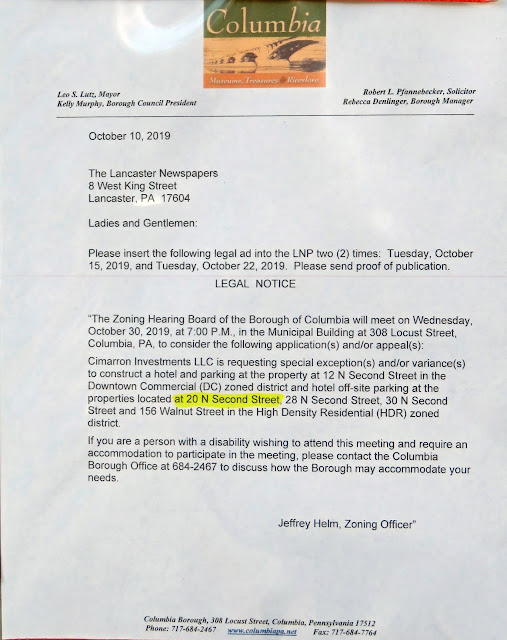 Grab argued that the number of spaces required by ordinance is not really required in terms of actual use. Although 91 rooms are proposed, they will only be 67% occupied at any given time based on the industry average, Grab explained. The ordinance requires a one-to-one ratio between room and parking space. "In reality only a certain percentage would be required for parking spaces," Grab said. "That would translate to only 61 required parking spaces." Grab noted that 16 public spaces are available on Locust Street and Second Street, although they are not being counted toward the required spaces. Murphy said Smith Travel, a hotel industry firm, did the research. Murphy also explained that the additional rooms (up from the 60 originally planned) are to accommodate anticipated motorcoach business.

According to Grab, about one-third of the 19 hotel employees anticipated for the largest shift would either walk to work or use public transportation. Murphy added that he would look at using a higher number of employees from town who would walk or ride bike or carpool to work. Grab said, "And that would reduce the requirements under the ordinance in terms of parking, to 10 spaces." He noted that one space is required for every 1.2 employees.

Grab said there is a 60-seat restaurant proposed that would require 15 parking spaces, under the terms of the ordinance. Grab offered the following calculation: 61 parking spaces for hotel guests, 10 for employees, and 15 for the restaurant - for a total of 86 required spaces. Grab said the applicant can provide 77 spaces, not counting the public spaces on the street; therefore, a dimensional variance from the established standard of 86 down to 77 spaces is requested.

Cimarron is also proposing to provide pocket parking behind the hotel and on adjacent property on Second Street and Walnut Street, behind which a pocket parking lot will be established. To accomplish this, Cimarron is also requesting a variance for setbacks across municipal boundaries, specifically, for any additional buffering. Grab noted that the area is currently zoned as high-density residential but that Columbia Borough Council is currently contemplating an ordinance that would change the zoning of a number of those properties to a commercial zoning district, in which case this particular variance would not be required.

Under current zoning, a residential district is required to have a 50-foot setback from any residential lot line. Because of the proposed configuration of the proposed structure this would not be possible, Grab said. He again noted that there is a substantial likelihood that the district would be rezoned anyway.

In addition, a dimensional variance for bulk requirements of the high-density residential district is being requested. The applicant is asking for relief from requirements so that pocket parking can be used. Grab said the variance would affect property facing Second Street and Walnut Street, and variances to "the extent necessary" from the required minimum lot area are being requested. The parking area would directly abut some property owners' backyards.

Cimarron is also seeking a variance for off-street loading. Murphy said there would likely be a weekly food delivery via tractor-trailer. The truck would likely need to access the building via the alley. Grab said "a variance to the extent necessary" is being requested.

Grab remarked on the seemingly large number of variances: "Given the scope of the project and given the fact that it's located in a heavily populated area, although it seems like a lot of variances, really it's not that many compared to the scale of the project."

During the citizens' comments portion of the meeting, Nora Stark, who lives across from the hotel site, emphasized that the neighborhood is zoned high-density residential. Regarding the planned hotel, she said, "It's great to see that, but you have to imagine living next to it, also." She noted various concerns such as increased traffic, illuminated parking lots, and increased noise from the bar and restaurant and buses idling and coming and going, all of which could create problems for residents who work different shifts. She also said there a number of children who live in the neighborhood.

Stark said that the Columbia Borough paid for two separate studies that don't support the need for a hotel at this location. According to one hotel study, there are 28 hotels within 10 miles of Columbia, Stark explained. She said the market is very competitive. "I think he has the right idea but to say there's no competition is not accurate," she added. She also cited a recent study that the borough commissioned from the Urban Land Institute which recommends starting at the center of town and building outward. She noted that Cimarron has already invested further uptown with a cafe and restaurant.

Stark also noted that parking is already an issue in the neighborhood due to nearby establishments such as the Foresters, the Moose, and a soon-to-be-open brewery. She said the restaurant and bar would exacerbate parking problems and would produce 24-hour, seven-day-a-week activity.

Stark told the commission that a six-story building is out of place in the historic district. "There's nothing else in the downtown that is six stories high," she said. She said that although a hotel is a "great idea," it would be better suited near Turkey Hill Experience along Route 30.

Grab responded, telling the commissioners that the hotel is a permitted use in the downtown commercial district. "What the borough has said is if you're going to put a hotel in somewhere, this is the zoning district where you should put it."


“The Zoning Hearing Board of the Borough of Columbia will meet on Wednesday, October 30, 2019 at 7:00 PM, in the Municipal Building at 308 Locust Street, Columbia PA, to consider the following application(s) and/or appeal(s):