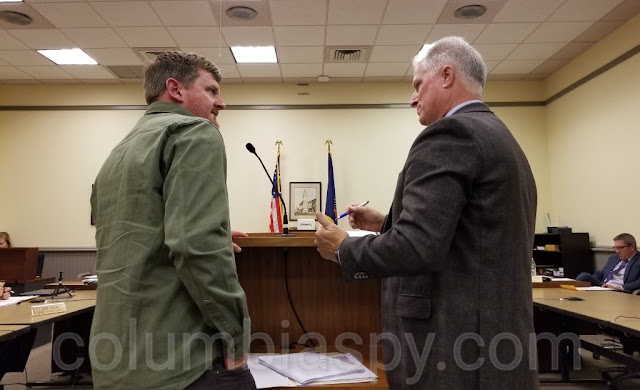 Floyd Landis (left) speaks with attorney Michael Grab at Wednesday night's zoning hearing board meeting. Grab represented Landis at the hearing, which was held to consider allowing a CBD oil processing facility in the borough.

Columbia Borough will be getting a cannabis oil processing facility in the near future. The zoning hearing board voted 4-1 Wednesday night to allow Floyd's of Leadville to set up operations at 185 North Front Street, which is owned by Doolittle Investments LLC. Floyd Landis, of cycling fame, is a principal of the Colorado-based company, which sells hemp-derived products throughout the U.S. Landis told the board he already has a lease agreement with the owner for the property which sits adjacent to the Veterans Memorial Bridge. Attorney Michael Grab represented Landis at the hearing.

Under questioning by the board, Landis said the facility will allow locally grown hemp to be processed through an operation involving freezing, drying, extracting, and distilling to create the oil, known as CBD oil. He envisions two to three shipments of oil per week from the site. (CBD oil is useful in the treatment of certain medical conditions.)

Landis explained that raw hemp will be delivered to the site via box trucks, with no more than two deliveries per day. He said operations would likely be during daytime hours Monday through Friday, with occasional Saturday hours. Four employees would run the operation, but there will be no retail sales.

Mary Wickenheiser, representing the borough's planning commission, said the facility, which was discussed at last week's planning meeting, is not what was originally envisioned for the area, which is zoned riverfront commercial. However, she said that the commission's recommendation to the zoning hearing board was to approve the variance requested for the processing of CBD oil at the location. "We still have the vision of what riverfront commercial can be, but at this time, it's not happening," Wickenheiser said, explaining that allowing the facility to be there is better than having buildings sit vacant and unused.

Resident Michael Stark read a statement imploring the board to hold steadfast to the original vision for the area. Stark asked, "Does the proposed use meet the letter and spirit of the defined purpose of this zoning district...?" Stark said the original intent of the district was "to encourage a mix of entertainment, restaurant and other commercial uses that will take advantage of proximity to the river and the downtown."

After the board returned from an executive session, member David Brumbaugh moved to allow the facility. Josele Cleary, the board's legal counsel, then read a list of stipulations the company is required to follow at the property. Terry Doutrich seconded the motion, and the board voted 4-1 to allow the facility. Board Chair Don Haines was the only "no" vote.