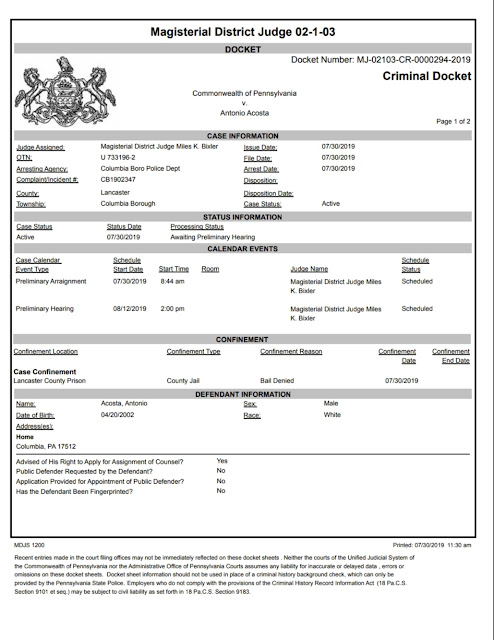 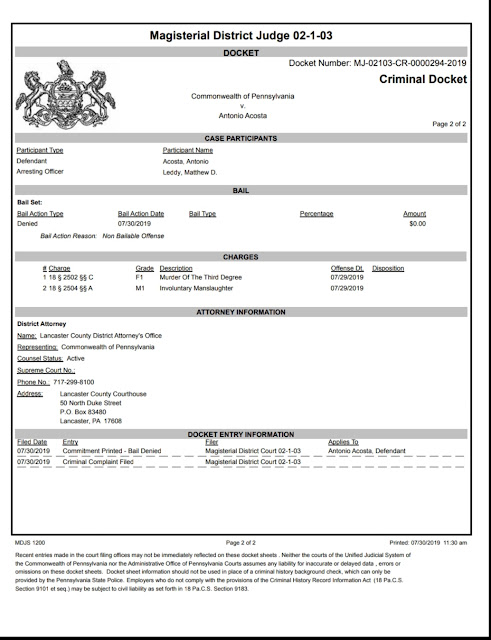 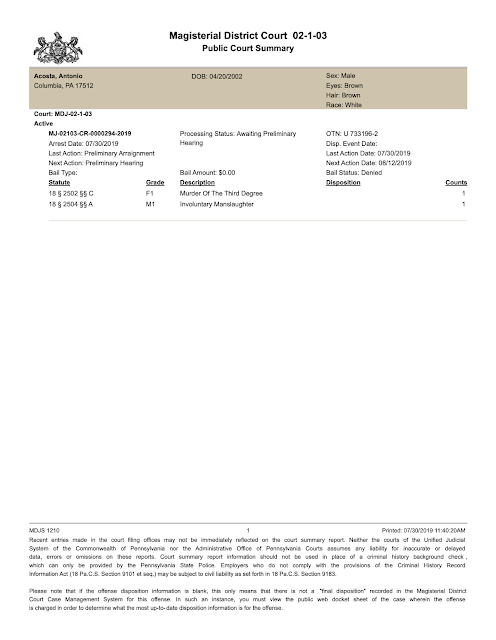 A 17-year boy is charged with third-degree murder regarding a fatal shooting Monday night in Columbia. Antonio Acosta, of Columbia, was arraigned Tuesday morning and remanded to Lancaster County Prison. Nicholas Mills, 19, was pronounced dead Monday night after being shot at a home in the 100 block of North Third Street. After being shot, he collapsed outside the home.

Acosta also is charged with involuntary manslaughter. He is charged as an adult. The investigation is ongoing. Charges could be added or amended in the future. The charges filed at this time are based on information gathered so far. Columbia police and Lancaster County Detectives, in consultation with the Lancaster County District Attorney’s Office, are investigating the incident. Assistant District Attorney Jennifer Ponessa approved the charges.

The victim was shot by Acosta once in the upper body. Several people were at the apartment at the time of the incident and have been interviewed by detectives. The shooter and victim were acquaintances; everyone at the home Monday night was familiar with one another.

Here is a narrative of what took place: Police responded to the home just after 8 p.m. and found the victim on a sidewalk with a gunshot wound. Police and emergency responders attempted life-saving measures at the scene. Acosta approached police and directed them to a handgun believed to be used in the shooting. The gun was in a rear room. The shooting happened in a living room. Acosta told police he pointed the gun at the victim and it went off. Acosta told police, “I didn’t mean for this to happen.” Acosta also removed a shell casing from a pocket and provided it to police. Regarding what happened before the shot was fired, a witness told police that Acosta produced a handgun and removed its magazine. A man in the home told Acosta not to play with the gun because it is not a toy, according to a witness. A witness heard a loud bang, looked up and saw the victim in pain. The victim ran out of the apartment and collapsed outside.

Police have been interviewing individuals, analyzing evidence at the scene, and gathering other information since the 9-1-1 dispatch. The victim was pronounced dead at the scene by a Lancaster County deputy coroner. An autopsy is scheduled for Wednesday. Acosta is presumed innocent.