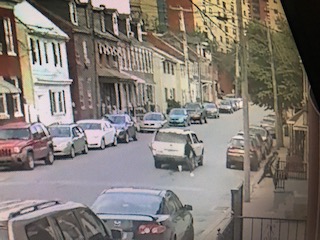 The Columbia Borough Police Department is investigating a shots fired incident that occurred on 06-19-19 at approx. 7:40 pm at the intersection of South Fourth Street and Avenue. J.  A white SUV, believed to be a Ford Explorer, was observed entering the area from the 300 block of Cherry Street and traveling south on Fourth Street.  An individual exits the vehicle and points what appears to be a handgun at a second individual who is walking in the 300 Block of Ave J, and then approaches the second individual. The individual in Avenue J initially retreated, and then fired multiple rounds towards the first individual. The first individual then retreated, entered the SUV, and the SUV fled the area.  The second individual also fled the scene and has not contacted Police.  A residence was struck in the 100 Block of South Fourth Street.  It is unknown if the white SUV was struck by gunfire and at this time, Police have not received any reports of any persons being struck by gunfire. The same vehicle was observed on surveillance cameras in the area of S. Third Street between Perry Street and Lawrence Street at another time in close proximity to the shooting.

Police are asking anyone who may have witnessed this incident or have information about the persons involved to contact the Columbia Borough Police Department at 717-684-7735. Tips can also be sent by texting LANCS TO 847411

Sourced via CRIMEWATCH®: https://lancaster.crimewatchpa.com/columbiapd/10552/cases/police-investigating-shots-fired
Posted by Joe Lintner at 10:20 AM