A council candidate accused Columbia Borough Council of violating the state's Sunshine Act, and two other citizens spoke out about finances and Council's lack of transparency.

At Tuesday's Columbia Borough Council meeting, Heather Zink, a council candidate, asked about the hiring of a candidate for Human Resources Consulting professional services, Kathy McCool. She noted that the position had not been discussed at any public meeting. Council President Kelly Murphy said the candidate was solicited through the Borough's labor attorney, Eckert Seamans. Councillors explained that the borough had lost four managers and the borough had needs to be met. Murphy said the HR person will be on board for three months to complete all the required duties at $75 an hour with an estimated total of $20,375. 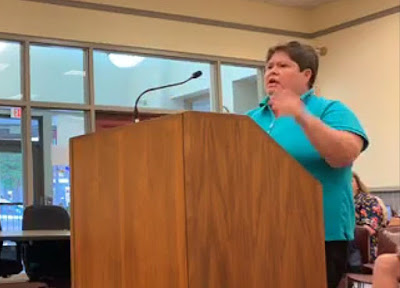 Zink: “You decided behind the public’s back."

Zink said the Pennsylvania Sunshine Act had been violated, because there was action behind the scenes. "You were already warned once," Zink said, referring to a warning letter to Council from the District Attorney's office last December regarding a Sunshine violation. She also noted that the candidate for employment had no municipal government experience. (Similarly, Columbia Borough Manager Rebecca Denlinger, formerly a consultant with Rising Tide Collaborative, had only six months of training under previous Borough Manager Greg Sahd.)

“You decided behind the public’s back,” Zink said, noting that the position had not been posted internally or externally. "Our taxes are paying for things. We deserve to have the best possible candidates to pick from – not just one person.” Zink added: “You’ve already been warned about Sunshine. Now you’re doing it again.”

Former Columbia Borough Manager Norm Meiskey reminded Council that the Borough had in the past made several mistakes in hiring, costing hundreds of thousands of dollars it subsequently paid for wrongful hiring. He also said the Borough had signed a consent decree promising that such a thing would never happen again.

Sharon Lintner, another council candidate, asked about a "right-to-know" request she recently submitted regarding Ordinance 897, the Borough's Revolving Loan Fund. Lintner said she had requested the terms and conditions of the loan but had run up against a 30-day delay invoked by Borough Manager Rebecca Denlinger "due to various reasons, including a legal review" as stated in an email reply. Although right-to-know requests are typically expected to be answered within five days, the law allows a 30-day extension in certain circumstances. The Borough has often used the delaying tactic for requests in the past few months. 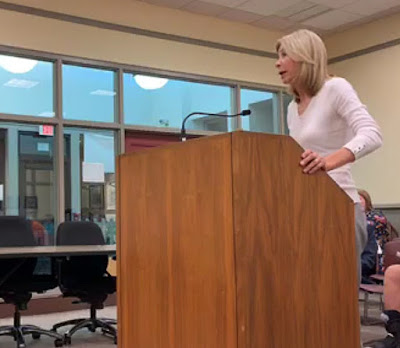 Lintner: “If the developer does not want us to know the status of the loan, then he shouldn't be borrowing from us, as taxpayers.”

Lintner had also requested the payment schedule, because the $3,671 figure that Council previously said the borrower has paid back seemed low for one year into the $250,000 loan. “I just feel, in the interest of transparency, that there should be no question that this should be made available," Lintner said. “If the developer does not want us to know the status of the loan, then he shouldn't be borrowing from us, as taxpayers.” 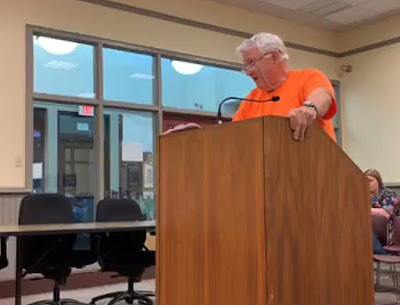 Meiskey: “You ought to be doing these things before the court orders you to do it."

Meiskey told Council that it should put back the $800,000 set aside for the Revolving Loan Fund. “You ought to be doing these things before the court orders you to do it,” Meiskey told Council, referring to a lawsuit currently in progress that was filed by the Columbia Concerned Citizens Association. Meiskey added that returning the funds could help "avoid a $1.28 million deficit this year.” In a victory for the CCCA, Judge Leonard G. Brown, III just ruled that taxpayers have standing in the case, thus overruling the Borough's preliminary objections and allowing the lawsuit to proceed. 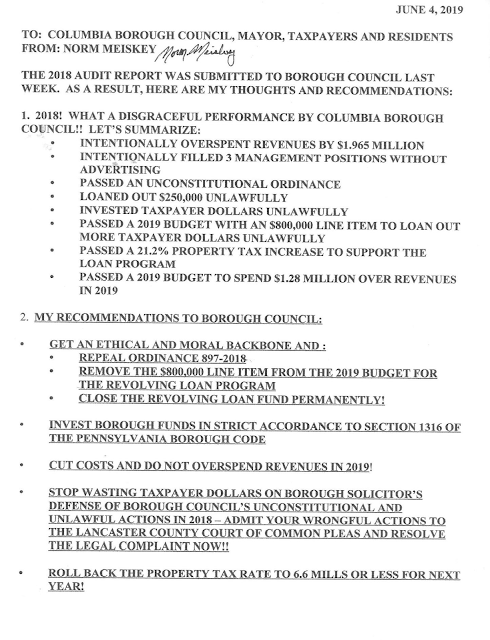 
At the meeting's conclusion, Lintner recalled a meeting of the Historic Architectural Review Board last year during which a crowd of citizens expressed opposition to a proposed historic district expansion that council had decided to move ahead with anyway. She also noted a rehab house on the 700 block of Walnut that citizens opposed and council went ahead with anyway. She also said citizens opposed the Revolving Loan Fund, but the borough kept it. She used the examples to show that citizens are not being heard.