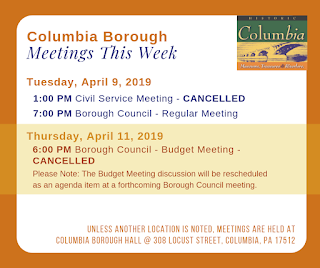 The meeting was not advertised in a newspaper of general circulation.

Yes..it was. All meetings were advertised in the lancaster news paper early in the year

The meeting pobably got more notice here than it would have in LNP. The laws need to change, now. It would save Columbia taxpayers thousands of dollars each year. The public should not have to support print media; print needs to solve it’s problems without government support.

Here’s a clue. There is far more local news in the Merchindiser than in LNP.

The budget meetings were included in the legal notice that was advertised listing all meeting dates for 2019.

The 2019 Borough meetings LEGAL NOTICE appeared in LNP - Always Lancaster on December 20, 2018. That same legal notice is posted at the Borough Website along with other Legal Notices. It would be really helpful if the date of the posting would be included with the posting. Here's the link to the Borough Legal Notices: http://www.columbiapa.net/government/legal-advertisements/

While some may argue there's more local news in The Merchandiser, remember, it is not a legally defined newspaper and until the Pennsylvania law changes, legal notices must be published following the law: "A notice, advertisement, publication, statement, or abstract of a notice, advertisement, publication, or statement, required by resolution of a corporation, unincorporated association, or government unit, or ordinance of a political subdivision, or by law, or by rule, order, or decree of court, to be published, for a valuable consideration, in either a newspaper of general circulation, a legal newspaper or an official newspaper."

No, that's simply not true, there's not more local news in the Merchandiser than LNP. You will never see anything in the Merchandiser about municipal meetings or school board meetings, never any crime reports. It is an advertisement rag designed for businesses. Only fluff, feel good news, nothing from the real world.

I stand by my comments; politics is not the only news. LNP has a highly filtered, fluff piece about council, and school board meetings once a month days after they happen. You won’t get news of local sports, you won’t know your neighbors kid became an Eagle Scout, that Mike at the Black Olive is a generous supporter of local causes, that St. Peter’s has a fish fry tonight, or any of the hundreds of other small things that actually make a community. LNP is a corporate owned advertising rag; I’m sorry good news is evidently ‘fake news, and unimportant to you.

Why is a old council member against the historic expansion??? Does this include there home????I do know it does NOTHING for the owner but why have it at all, what does the borough get out of it any way , and way is it not passed on to the owners???

who is the old member?

Who really cares about a historic district I bet the younger generation could care less. And why put uptown people through this to be careful how they can fix up their homes. I bet there are other cemeteries in town that could be historic too. I think people who pay taxes should be able to do what they want to their homes. Also who cares if a taxpayer has a car in their yard. This town is getting out of hand.

WHY PUT ANYONE THREW THE CRAP?
This bounch of aholes has to go or there will be no future in town!!!!

RESTAFF THE BOROUGH , manager ( so called) on down , only keep the good people , the few that are there.

Bring in the state inspectors for food , NO BRAINER , THIS TELLS the citizens that there are no brains there now.

Yes that would save the borough money.

If the bench breaks , they can go to the new medical building at old Lucas factory. Nice .