Resignations
Columbia Borough Council accepted the resignation of Jay Frerichs and Jeanne Lehmann. Frerichs was hired as a property inspector last November. Lehmann was vice-chair of the Historic Architectural Review Board. 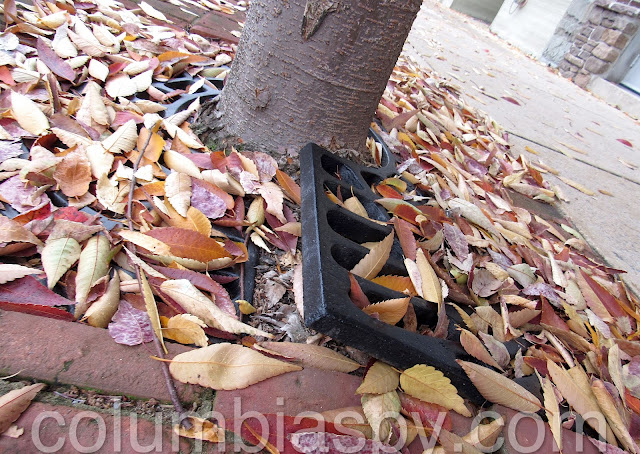 Tree grate on the 300 block of Locust

Zink also questioned the need to pay an outside contractor (Tom Jones Landscaping) to mow at the Veterans Memorial Bridge Plaza. She noted that workers should be available to mow, since several were transferred from the sewer plant when LASA took over the operation. 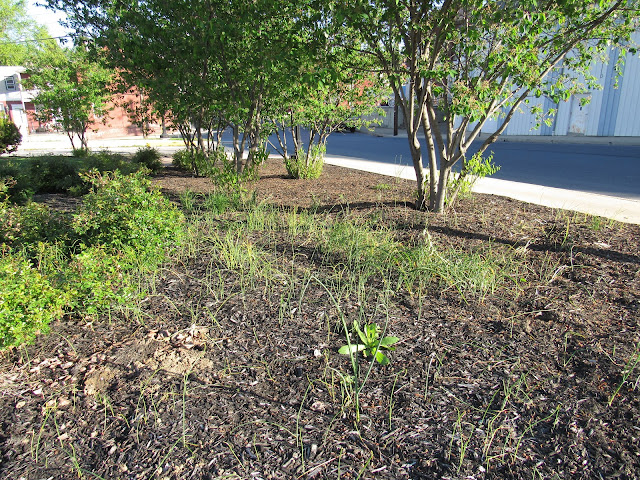 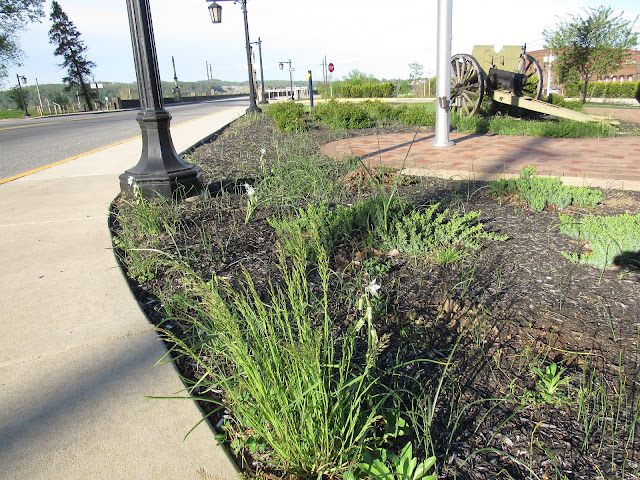 The two photos above were taken Wednesday,  April 24, 2019 at the bridge plaza.

Councilman Cleon Berntheizel replied that the contractor continues to install commemorative bricks at the plaza at no cost. Berntheizel added that since the area is a memorial, it should be kept "as perfect as possible." He added that borough properties are frequently mowed "very quickly" and workers don't always pick up the clippings. Berntheizel said that the contractor also does weeding in the spring. Murphy added that this is the time of year when other projects are kicking into place for the highway department.

[A current Highway Department employee, Jim Jones, is a landscaper who has done several projects in the borough. Directing him to maintain the bridge plaza could eliminate the need for an outside contractor, thus saving money for the borough] 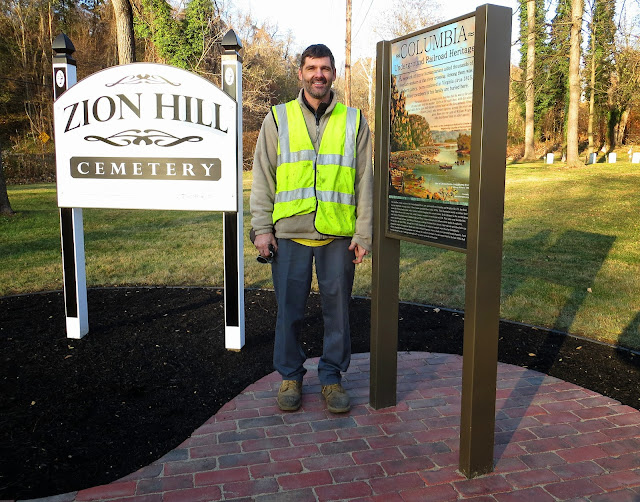 Jim Jones, already on the Highway Department, is also a landscaper who has done several projects in the borough, including this one (shown above) at Zion Hill Cemetery in 2016.

Frank Doutrich asked how much money was put into escrow by contractor Eberly Myers LLC for the large "hole in the ground" at the bottom of Locust Street where a house was demolished to make way for an apartment building project. (Columbia Spy reported on the project HERE and HERE.) The project has thus far not materialized. Borough Manager Rebecca Denlinger said that it was her understanding that they had a six-month time frame to complete what was required in their permit, including demolition and foundation work. She added that the company needs to raise more capital for the project. 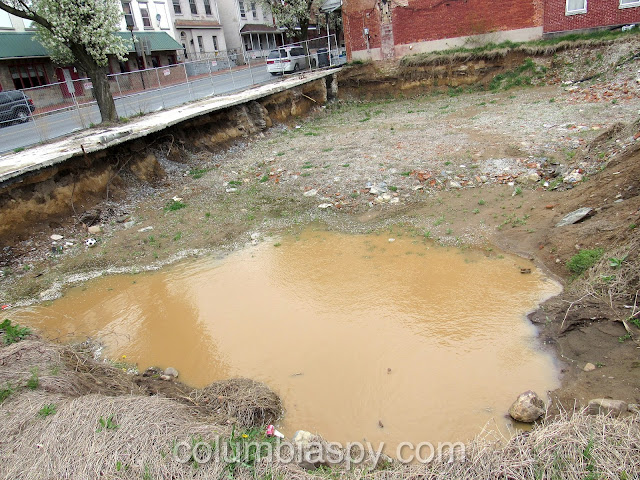 The "hole in the ground" at the bottom of Locust Street, where a house was demolished to make way for an apartment building.  The project is currently on hold.

The hole is there more than 6 months. Any body else would have fines.

Hopefully they get a better company for 7 and 800 blocks then the half ass company that did 5 and 600 blocks!!

These council people do not care about money as long as it's there they will spend it because it's not theirs. They should try to save the taxpayers money and everyone in this boro might be happier. Why did they buy a new street sweeper and keep the old one for a spare evidently it works. I sure hope we get new people on council who are thrifty.

When you buy a new car do you keep your old one for a spare? Keeping old the sweeper takes up space and would still incur maintenance and insurance costs. My guess it was used as a trade in or sold. I don't disagree the borough leaders could be more thrifty but this makes sense.

in my opinion, we shouldn't even have a street sweeper! get a broom and a shovel and clean in front of your property once a week. Put it in with your trash. However, many people complain, but you know that very few would actually sweep once a week. Its a no win.

if you all remember correctly....the grates around the trees were discouraged by residents. they were used in the past, but trees and tree trunks grow and so they need constant maintenance. the people that wanted them SHOULD be responsible to pay for the maintenance. it's ridiculous..the lack of don't care and disrespect to your constituents.

They leased the new one , I think they will auction the old one off.

They need it for the bridge and money pit lot.You know the pit has to be hum..

And put hand rails up to the coffee shop and pay his taxes and leins, yup still is Columbia , it is who you are , ask the one sided mayor who lets this stuff go on , and borough manager that just likes to spend other peoples money , WITH NO EXPERENCE!!!!!!

Hey on the bright side Cimmeron now owns the amvets to put there own parking lot in , Hopefully they can get there own loan (not threw tax payers ) to due there pipe dream.

Well don,t that look nice , come onto the main street and yes a hole , come in the so called gate way to Columbia and we have a bunch of drunks on the side walk on 3rd street , with open containers Hum , I think there is a law in Columbia about that , yup a man CANNOT sit on his step and have a beer but they can sit on the side walk and get drunk. COUNCIL WHAT IS THIS ??You are the people that do this crap , now what is going on ? DOUBLE STANDARTS , SLECTIVE ENFORCEMENT HAS BEEN HERE AS LONG AS HELM.