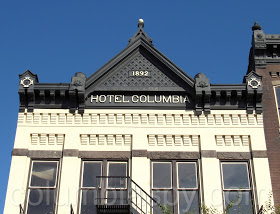 The area being evaluated is anchored by the vacant Hotel Locust and Hotel Columbia buildings, which includes two adjacent underutilized parcels and a vacant lot next to a thriving antiques market. Columbia Borough leaders believe that a redevelopment effort at this location would serve as a catalyst for other redevelopment in the commercial core of this community.


Questions to be addressed by the TAP Panel:

1. What is the potential for infill mixed-use development that would both fulfill an identified market need and establish an anchor for the downtown commercial district?

2. What parking solutions are possible for a significant redevelopment project at this location in the center of the commercial district?

3. What partners and resources can the Borough leverage to make something happen at this site that has sat vacant and deteriorating?

Columbia News, Views & Reviews previously reported HERE that the Lancaster County Land Bank (of which Columbia Borough is a member) in conjunction with the Columbia Economic Development Corporation was looking to acquire Hotel Locust/Hotel Columbia. 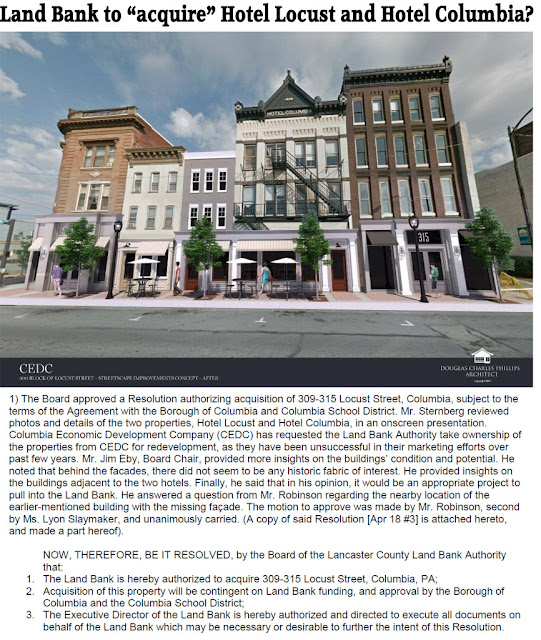 In addition, the relevant section of the minutes of the April 24, 2018 Lancaster County Land Bank Authority read as follows:

1) The Board approved a Resolution authorizing acquisition of 309-315 Locust Street, Columbia, subject to the terms of the Agreement with the Borough of Columbia and Columbia School District. Mr. Sternberg reviewed photos and details of the two properties, Hotel Locust and Hotel Columbia, in an onscreen presentation.

Columbia Economic Development Company (CEDC) has requested the Land Bank Authority take ownership of the properties from CEDC for redevelopment, as they have been unsuccessful in their marketing efforts over past few years.

Finally, he said that in his opinion, it would be an appropriate project to pull into the Land Bank. He answered a question from Mr. Robinson regarding the nearby location of the earlier-mentioned building with the missing façade.

The motion to approve was made by Mr. Robinson, second by Ms. Lyon Slaymaker, and unanimously carried. (A copy of said Resolution [Apr 18 #3] is attached hereto,
and made a part hereof).

NOW, THEREFORE, BE IT RESOLVED, by the Board of the Lancaster County Land Bank Authority that: