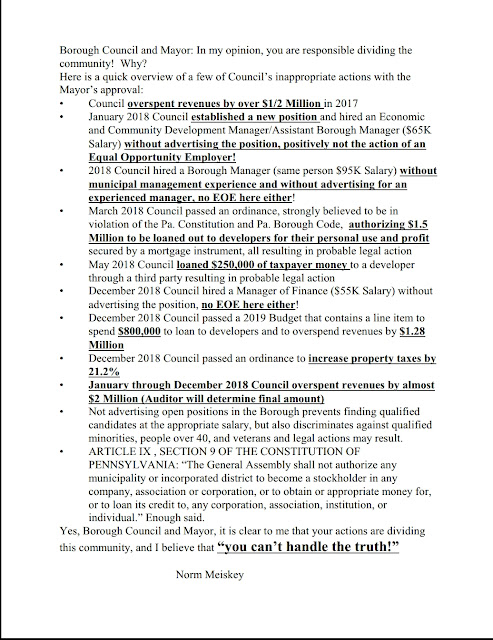 Lets build a wall to divide columbia in two.

Please, this guy engineered the last tax increase. Council and the Mayor aren't dividing the community. Misinformation is.

On another note, everyone says the Spy doesn't post comments that are contrary to its agenda. Lets see if they post this.

These must be Nate or his pessimistic friends making negative comments. Obviously they won't post on the Facebook page for us all to see who they are.

We don't need a wall to do that, we have council.

Whoever it is had an opportunity to make his case but didn't - because there is none, just a negative comment.

No, Bo, everyone does not say that.

The borough has the normal political party divide. But we now also have a divide of those who support their friends on council no matter how crappy of a job they are doing and the majority of us who don't support their wrong doings, period!

OH come on, we've all heard that criticism. Cole proved them wrong by posting my comment, and I'm glad he did. Folks need to hear all sides. I disagree with many of Norm's criticisms. And you know what? That's ok. Many of the comments I've read on this site disagree with actions taken by council. That's ok too. Lord knows I don't see eye to eye on every issue with those I have voted for or against. That's our system. But I do, nonetheless, feel like folks are not hearing all sides of the different issues discussed That's unfortunate. Anyone can make a comment like "probable legal action" or "spent a gazillion dollars, but the auditor will tell us the real number." Those are completely meaningless statements. They provide nothing constructive. But that's just my opinion.

Why would people want to post their names? So council can stick a pack of rabid codes enforcers on them and quick ticket them into submission? Sorry council. You made this mess, you fix it. And start with policing your own before policing us.