Borough Council took a few more tentative steps into the world of social media at Tuesday night's work session. As was the case at the previous meeting, Borough Manager Rebecca Denlinger recorded the meeting via cell phone as another practice run towards the eventual livestreaming of meetings.

Council also continued hammering out a policy for its planned Facebook page. Cleon Berntheizel, chair of Community Development, presented an update draft of the policy.  Denlinger said the update was the third draft and was reviewed by the borough solicitor, who made changes to the policy. Also discussed were options to connect to Twitter and Instagram, both of which were considered premature at this point. The Facebook issue will be placed on the agenda for the March 12 council meeting.

The draft presented at Tuesday's meeting is shown below. 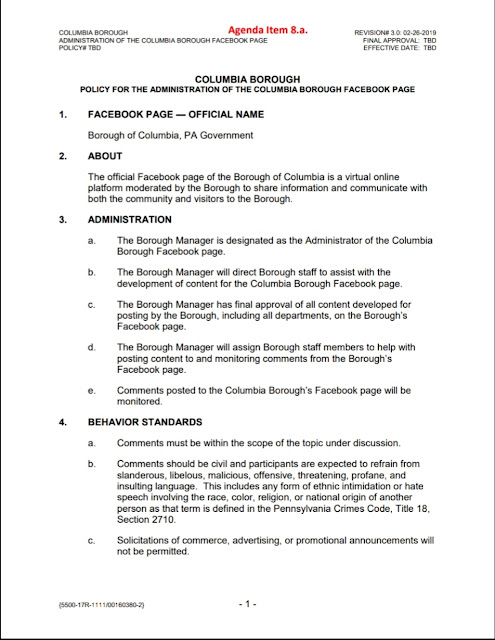 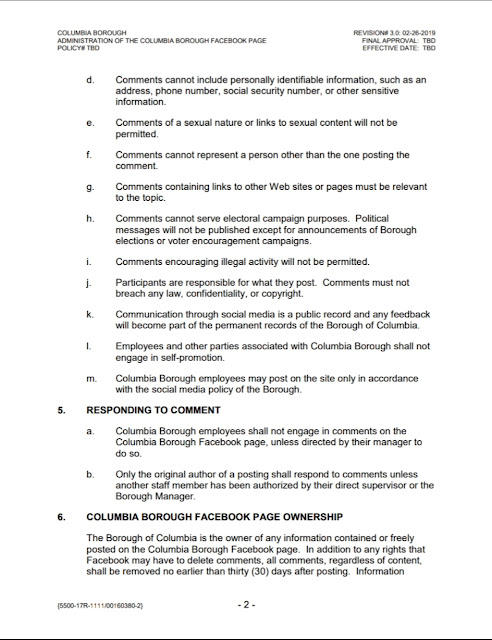 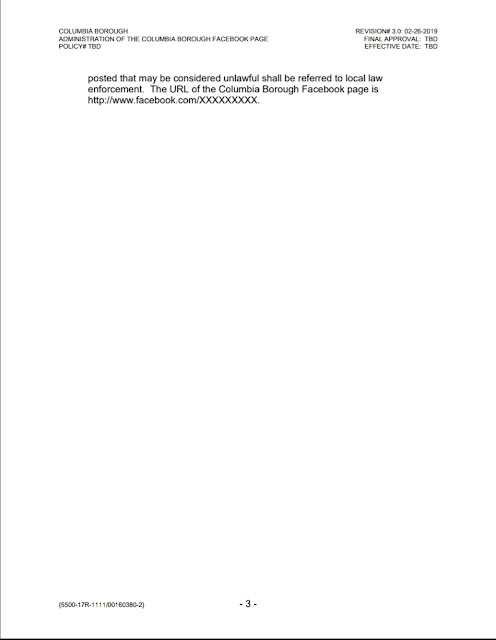 I hope all of point #4 in the above borough agenda item above is in agreement with the public forum doctrine. First amendment issues are a reality for governments, even in facebook land.

They don't listen to the tax payers now what makes anyone think they will on Social Media?

Irony, thy name is council.

The manager has too many big ideas for our little town. She has big ideas but they won't work out. She was not born and raised here what does she know about Columbia? We need a native boro manager who knows what they would talk about.

What is truly being accomplished by those in charge of Columbia borough worth publishing on social media?

I am sure there will be superficial post because no one serving the borough wants to deal with the real serious issues at hand.

Publish information showing real action for real changes that translates in lowering property taxes and i will find this a worthwhile endeavor.

SERIOUSLY???? THIS IS COLUMBIA BORO. NOT BALTIMORE, HARRISBURG, PHILLY, ETC. There's NO need for drones. No need to record/live stream council mtgs. wth?

how about you look into being HONEST and ANSWERING TAXPAYERS QUESTIONS???? Instead of ignoring them. We the people are fed up.