Cheaper by the Dozen? How many people live there anyway? 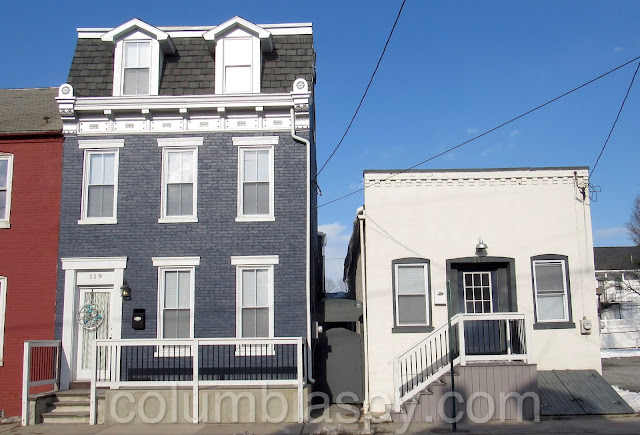 Gerald Hawn, as he has done on several previous occasions, once again brought the issue forth, this time at Tuesday's work session. Hawn owns 501 Walnut Street, right next to the parcel in question. In earlier meetings, he had asked Borough Council about the status of 119 North 5th, since so many young women entered and left during the day and vehicles were being illegally parked in his lot. Council seemed dumbfounded at the revelation and offered no definitive answers. Hawn finally took matters into his own hands and asked the owner of one of the parked vehicles what was going on in the house. The man replied that it was a "rehab house" that had space for 12 women, although only 11 were staying there at the time. The man said his girlfriend was one of women.

Hawn presented this information at a recent council meeting. According to Hawn, Borough Manager Rebecca Denlinger subsequently contacted him just before the February 26 meeting to tell him a zoning enforcement action is pending.

At this past Tuesday's work session, Hawn asked for an update and was told by Zoning Enforcement officer Jeff Helm he will be meeting with the property manager/lessee of the building on Friday morning, March 8, to discuss elements of the zoning enforcement notice. According to Helm, the person will be given an opportunity to address issues discovered during an inspection done on Monday of last week. Helm said if an agreement is not reached this Friday, the lessee will have 30 days to "fix" the issues. If this is not done by the deadline, the lessee will have the right to appeal the issue to the Zoning Hearing Board. Hawn asked what the zoning issue is, and Helm replied, "The zoning issue is the number of people."

The parcel includes two structures, one of which, at 117 North 5th, is currently unoccupied. The other structure, at 119 North 5th, has three bedrooms and 2-1/2 baths as well as the other accommodations listed below. (The Lancaster County Tax Assessment Office lists the parcel simply as "117 N FIFTH ST".)

According to public records, the property was acquired by ACEMAC LLC on February 28, 2018 at a cost of $210,000. Interestingly, the company was created only 12 days before, on February 16, 2018. Additional information is shown below. 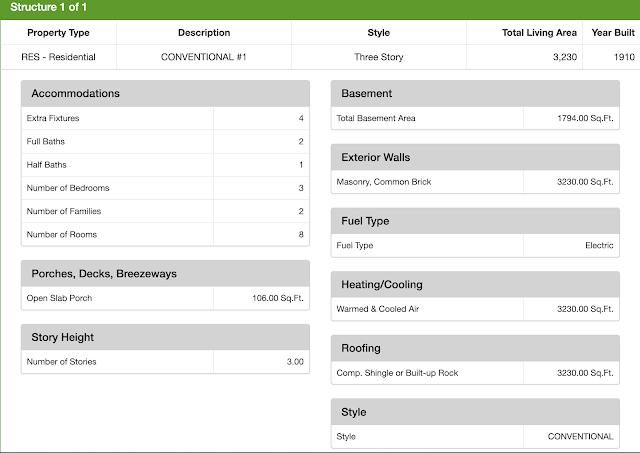 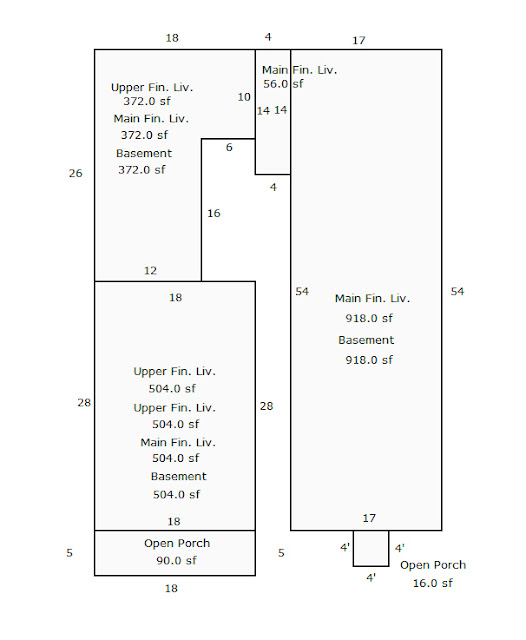 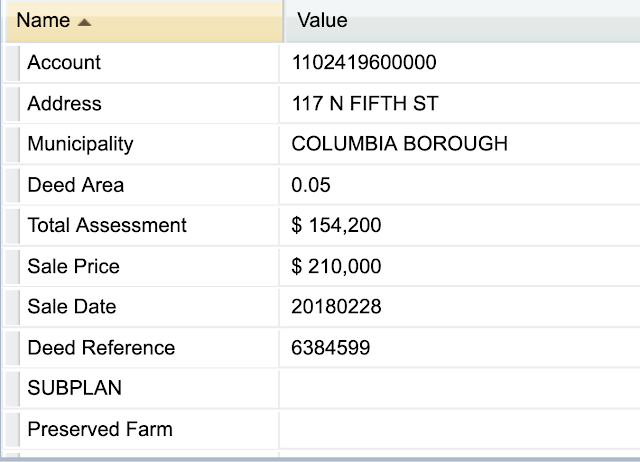 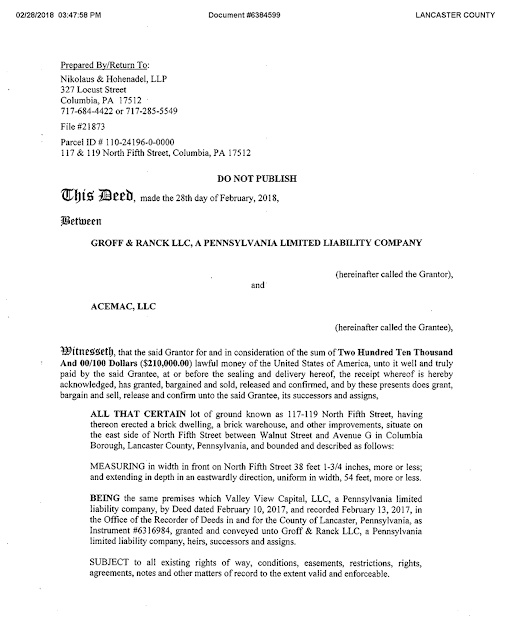 Wait. Helm is going to try to get an "agreement"?
Here we go again!

I thought by ordinance there can only be so many unrelated people residing in one building. Does that apply?

The address of Acemac on the deed transcript is the personal property of Edward A Bhopa at 112 Bank Barn Lane, Lancaster, PA. How was there an occupancy permit released to Mr. Bhopa under this organizations title of property. Who inspected this property? Was this dwelling designated as a multi unit structure?
With all the mistakes made by Mr. Helm in the last ten years, it should be time for a forced retirement. The pensions our borough pays out has to be astronomical.
This town is due for a real wake up call and it starts in the primary's. I also was appalled by the Republican Committee not supporting the young lady at the CCCA meeting. Oh, that's right her agenda is about ALL the taxpayers and not just a few. Maybe I should by tickets to Garth to eat cheese and drink wine to make me feel better about my high taxes. Give me a break!

Aren't 8+ women in a house considered a brothel?

Helm wow think about this he inspects the food places and health problems in Columbia.

One on walnut street too!

Are they unruly. How many times have the police been dispatched to that address. Throw those women to the street. Isnt it better that they should be homeless

The Columbia Republican Committee is supportive of the Republican candidates in the race, is "she" a republican? If so your comment is inaccurate.

She is Republican and she posted it on her Facebook account. She said she was NOT being endorsed.

I hope that the 12 people that live there pay taxes to the Columbia borough. The homeowners of Columbia need a HUGE break in their property taxes. Time for other people and businesses to pay their FAIR SHARE. Cut spending and pay realistic wages to those employed by the borough. Real change comes through real action, not continual real non-action and dodging the big issues this borough faces. Those in charge of the borough should step down if you can't do your job - results matter, not excuses or silence.

Unruly? More like unlawful. If Columbia is a free for all, then why are we paying for code officers? We have codes and zoning, it's time for equal enforcement for all.

Lets build a wall like the one that seperated germany

COUNCIL GET RID OF AT LEAST 500 RENTAL PROPERTIES. IT'S KILLING THIS TOWN. THEY DON'T PAY TAXES AND THEY ABUSE THE POLICE DEPT. COSTING US TAXPAYERS MONEY

There are 16 people living in my house. Three of the women are pregnant to the same man that will make 19 come summer.

Yes, we do need a huge break on our taxes. Which is why the borough, as well as the school district need to lower taxes, making home ownership in Columbia look more attractive.

However property taxes are based on property assessments not how many individuals live in the home. If those individuals are paying rent then they are in fact contributing to property taxes. This type of matter is out of the borough and school districts hands and falls into the hands of state legislators who need to focus on the issue of property tax reform and create a system where everyone, not just homeowners contribute to that tax base.

I believe that you as a citizen could do a better job of educating yourself on the matter.

They do pay taxes which is included in their rent. Rental properties are subjected to property taxes as well based on the properties value, not how many tenants live within that property. Property taxes are taxes based on the value of a home, not individuals. This is why property tax reform needs to be pushed harder at the state level to create a system where everyone contributes and the burden does not fall solely on homeowners.

This comes as no surprise considering the source.