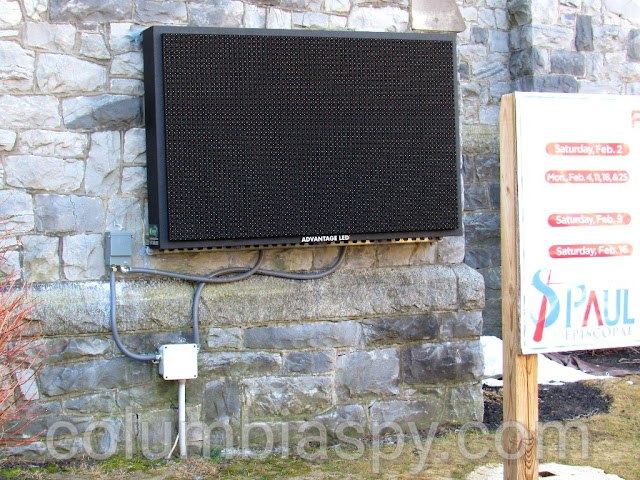 St. Paul Episcopal's LED sign, a source of some recent controversy, is now mounted, wired, and ready to go, most likely on or about March 1, when the current printed calendar out front expires. The church is situated in the borough's historic district, where such signs are typically a no-no, but the church has fallen back on an obscure law regarding religious land use to justify using the sign. Or has it? The trail of explanations is byzantine, and one can only speculate what is actually in play here.

According to an LNP article dated July 25, 2016, Columbia Borough Council, in a decision supporting the Historic Architectural Review Board (HARB), denied the church permission to install the LED sign:

Council members Kelly Murphy and Cle Berntheizel removed themselves from the vote because they are members of the church.

However, the church's intent to go forward with the sign became apparent in October 2017, when it surfaced, mounted on a steel frame, in front of the church building but behind the traditional wooden, freestanding sign. The church was subsequently presented with a "stop work" order from the borough's zoning enforcement officer Jeff Helm.

Shortly afterwards, the sign and stand were removed, only to resurface this past January - this time mounted to the historic stone and mortar of the church's front face, using metal support strips secured by a series of large bolts. A posting about the sign on Columbia Spy's Facebook page elicited these responses from Reverend J. Patrick Peters of St. Paul's:


"Well. First - we had a permit from the Borough to install as we did. It was posted during installation. If anyone would like to see it - just let me know. Second - we agree that the wooden sign is atrocious but it was the best we could given the misinformation we received before the first installation over a year ago. Third - we have been part of this community for almost 170 years and will respect our neighbors. It would be helpful - out of respect - to confirm the accuracy of information before posting. A quick phone call could have made the Columbia Spy posting accurate."

"Columbia Spy the permit was signed by Jeff Helm you can ask him. My lawyer worked on this over the last year. Apparently an internally lit sign on the wall of a business is permitted under the zoning at the time of the permit application and thus does not need to go through anyone but the zoning officer. Freestanding internally lit signs were not permitted and that's where we were misinformed a year ago. Jeff has all the information."

When questioned about the sign issue at a council meeting earlier this year, borough officials seemed perplexed, but at the February 12, 2019 council meeting, Borough Manager Rebecca Denlinger said the sign is permissible based on a religious land use statute. Denlinger said the information should have been communicated to HARB via the zoning officer (Helm). "If it hasn't, it should have been, and it will be if it wasn't," Denlinger said. (A HARB representative told Columbia Spy today that no such communication was received by the board.)

Regarding council's decision to support HARB, Denlinger said, "I don't think that they were aware that that's what the church was going to come back - and what they did was that they came with their attorney weighing in, again with this religious land use act that said that borough was not able to deny the construction on that particular signage." Denlinger explained that although council voted to support HARB, it did so in error, not knowing about the religious land use statute, "and so we had to reverse that decision, and we did that administratively." An administrative reversal of a council decision seems peculiar because traditionally it would require a majority vote by council to reverse one of its decisions. In addition, HARB routinely bases its decisions on Secretary of Interior standards, bringing into question the assertion of an error.

Columbia News, Views & Reviews recently shined some light on the issue with a post that reads:


"St. Paul Church LED sign | Turns out the question about the inconsistent signage on the downtown church (reported by Columbia Spy here may have some legal standing under the “The Religious Land Use and Institutionalized Persons Act.” Meeting participants learned that last night as the borough manager said the church has argued it has special land use prerogatives under the act. "

The post contains a link to information on religious land use, which can be downloaded HERE. To the layman, however, the statute appears to offer scant support for allowing a church to install an LED sign.

According to HARB, the application that was originally reviewed and then denied by both HARB and Council was for a freestanding sign, and the church should have applied for the sign to be wall-mounted. Reportedly, this did not happen.

To summarize, the church chose to override a 2016 decision by HARB and borough council by mounting the sign on a metal stand in October 2017. The borough then posted a "stop work" order, and the sign and stand were removed. In January 2019, the sign was mounted to the church building's exterior. Reverend Peters stated that the zoning officer had signed a permit allowing the sign to be wall-mounted, because borough ordinance restricts only freestanding internally lit signs. However, according to the borough manager, the justification for allowing the sign is based on a religious land use statute. In addition, the decision by HARB and Council was reversed "administratively," an apparent break from proper protocol.

Furthermore, allowing the sign based on a religious land use statute may open the door to a grievance from the Haitian Maranatha Church on the next block down, which was prevented by borough officials from painting its building's concrete trim blue last summer.

On a related topic, I've noticed on Facebook that a certain councilman promoting his "uptown cottage" business. In his post he mentions that the business in historic Columbia, more specifically he says it's in the "Historic Mt. Bethel District". As an elected official and resident, he should know there is no such district designation and should refrain from calling it such.

This whole thing has "Jeffy" stink all over it. Why, why, why do they keep him in the payroll? He has repeatedly proven to be detrimental to this community with his poor decision making.

It sounds like everyone is running amuck! Who is in control of running this Borough? It's a complete understatement to say that the left hand doesn't know what the right hand is doing.

If they do not own the property, this has no bearing on the Hatian church. I don’t believe they do.

I have questions about how Hermansander was allowed to paint the brick on the property he purchased on Locust St. it was in its original unpainted state when he bought it. I admit I don’t have all the facts but I suspect it shouldn’t have happened.

Yes that's a great question. Why is it okay for Hermansader to paint his brick building but the church can't paint their stone building?

Based on the fact that Columbia has a HARB, one would think that the church would have some degree of respect for their recommendation as well as respect for the historic nature of their own building. If this is accepted and allowed, then HARB should be abolished and there should be no further consideration to the expansion of the historic district. We already have arbitrary code enforcement.

Yes I would completely agree with this. There is no point to having a HARB in a community that doesn't enforce it. Obviously the expansion should be killed. It's apparent that the only council person pushing the agenda for it is one that made up the fake name of "Historic Mt. Bethel District"! Sounds like a personal agenda, doesn't it? Surprise, surprise!

Stone is natural.
Brick are made. They become ugly.

Laws are made too. When they are ignored, they are ugly too.

That is not written in the ordinance. But again, this is another example of selective enforcement.

Why do we have to choose? They are BOTH a problem, along with many other problems.

WHY DID Helm give them a permit to begin with???? Can we say TWIN TOWERS AGAIN.

The manager is the problem , she got us into the loan program , look at Lancaster they tried and got stopped .