A few takeaways from the February 5, 2019 borough council meeting/work session 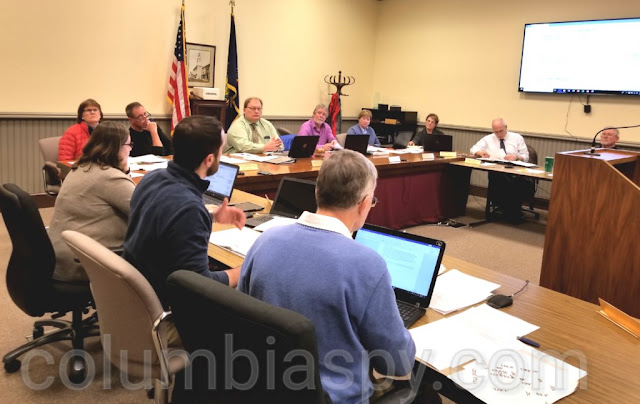 Park Study
YSM Landscape Architects presented plans for three Columbia parks - Janson, Rotary, and Makle - derived from a study that was done over the past year or so. Plans for the parks can be found as part of the 146-page council packet HERE. Some aspects have not quite been ironed out, such as maintenance, funding, security, etc. A resident asked about the cost of the study but councillors and consultants didn't seem to know. (The cost of the study was $67,000, as we reported HERE.)


Columbia Life Network
Jamie Widener, director of Columbia Life Network, asked Council for $35,000 to get the organization through the year. He said there is a limited amount of operating capital left - 60 days worth - and without Council's support, CLN will be unable to continue providing services to the community. At last fall's budget meetings, Widener had requested $66,000 but was denied any funding. Councilwoman Pam Williams asked where the money would come from, and finance manager Kyle Watts said cuts would need to be made elsewhere in the budget. Mayor Leo Lutz weighed in by saying, "I'm going to give you the easy answer to funding. Take some out of that revolving loan fund." Several residents supported the mayor's sentiments. No action on funding was taken at the meeting.

Rules of decorum
Council presented a draft resolution for rules of decorum at meetings, which can be found HERE. One item of contention was the requirement for anyone recording meetings to publicly announce so at the meeting outset. Brian Long of Columbia News, Views & Reviews said that according to the Pennsylvania Sunshine Act, anyone attending a public meeting must assume they are being recorded. Councilman John Novak said it is a matter of courtesy to inform the public.

Abandoned vehicles
Councilman John Novak said the borough solicitor created a draft ordinance for review regarding abandoned vehicles. Code officer Paul Paulson said code officers cannot enter private property unless there's probable cause of a health issue. Mayor Lutz said in all ordinances there's a bit of discretion (to be exercised). Resident Dennis Wolpert said Representative Dave Hickernell told him that Council has the power to create a tough ordinance to address the issue. Mayor Lutz said police officers can enforce any existing borough code. Novak said borough officials will further discuss the issue, which will then be examined again at the next borough council work session on March 5, 2019. 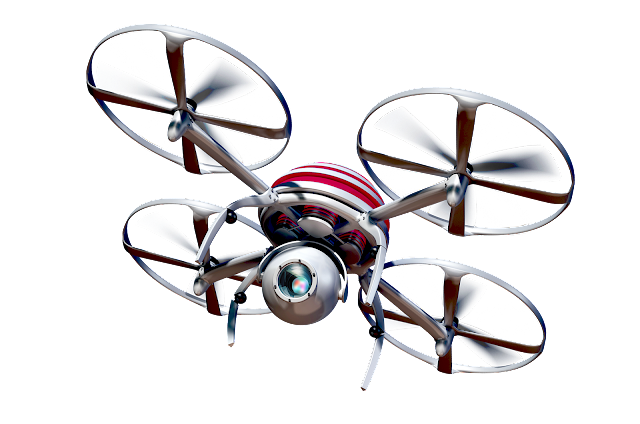 Drones
Rebecca Denlinger said Council cannot write any laws regarding drones in the borough because doing so would pre-empt state law, but officials are looking at drafting a policy for drone use at emergency scenes.

Short-term rentals
According to Denlinger, the borough's planning commission has created a draft ordinance to be reviewed, but the outcome of a case currently before the state Supreme Court regarding STRs might influence the proposal. 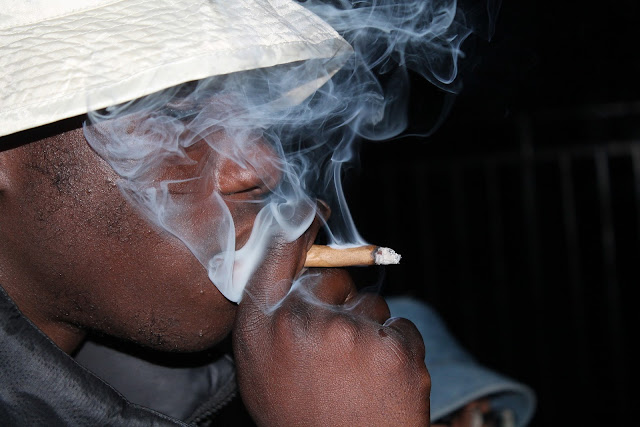 Recreational marijuana
Novak said legalization in PA could bring in $500-600 million in revenue to the state. He said he wants the borough to be prepared in the event the legislation is passed. Lutz raised several considerations, among them licensing and inspection of facilities, similar to what is prescribed in the borough's tattoo ordinance.

Livestreaming
Council is gearing up to livestream its meetings in the near future. To record meetings, a cell phone used by former Code Enforcement Manager Steve Kaufhold will be fitted with a special lens recently obtained by Council. The next step is to obtain a microphone. Borough manager Rebecca Denlinger did not say who will be in charge of recording.

Social media policy
Council is in the process of hammering out a social media policy in order to create and maintain a Facebook page. Denlinger will approve all comments from councillors and others on the site. The draft policy is shown below. 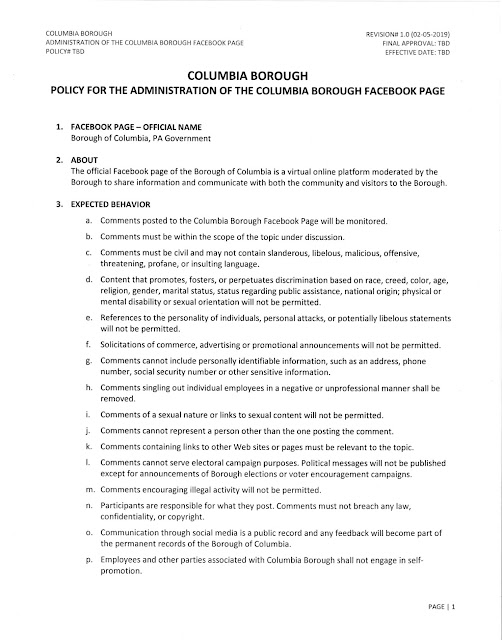 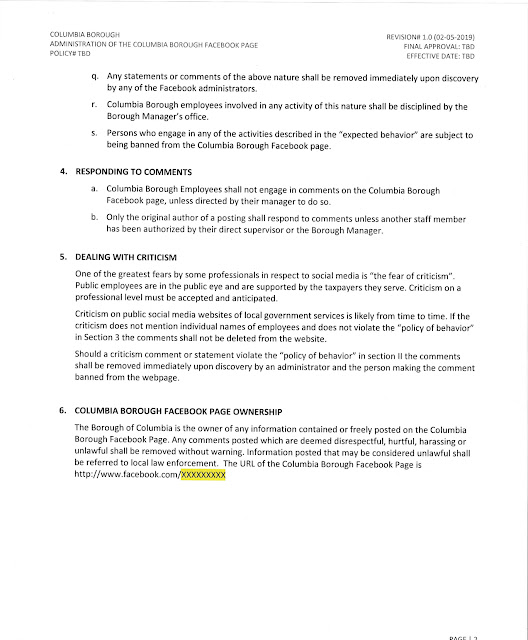 Laughed when I read about a Face Book page from the Borough. Did you read the rules and see who will monitor and make all the decisions. PLEASE DON'T TAKE DOWN SPY. Their Facebook page will be useless. They will post what they want you to see and only what they want you to see. Sounds like they want everyone to think they are transparent. NOT LIKELY they will start now. Just another way to CONTROL the people

I hope they give Jamie money for Life Network now that is a worthwhile thing. They help many people not just needy ones. He is a very helpful guy when you ask him for something. The lady who works there is also helpful.

This is the exact statement from the Sunshine Law:

Persons who attend and verbally participate in public meetings must expect to have their statements recorded.
Since zoning hearing board hearings are public meetings under the terms of the Sunshine Act, any citizen has a
right to tape record the session. Individuals speaking at the hearing must expect to have their statements
recorded. They can have no expectation of privacy which would afford them protection under the Federal Wire
Tap Act."

The god is behind on 10 property taxes , and the borough gave him a revolving loan ????? The councilman is behind on taxes and a tree lein and is still on council HUM

Good for you Brian don't let them get away with anything you and the Spy are doing great work. Keep it up. They know they are being watched now.

Is anyone else concerned that the Solicitor seems to be giving incorrect legal advice? We were told he gave his blessing to the revolving loan fund which other attorneys have said is clearly illegal. Now he is telling the boro that they cant really creat an ordinace with teeth because it is against the law, yet our state lawmaker says they can give the ordinance teeth. Maybe it is time we start looking for a new Solicitor if we are not getting effective legal counsel.

Ask the legislators who drafted the law.

Actually, there are 12 properties on the list for the favored developer.

Yeah, okay. They just spend time and energy on the council planning events, etc. because they are ALL inherently evil, sick, twisted people that have nothing better to do. Yep! You nailed it!!! Don't attribute to malice that which can be attributed to incompetence. Seriously! I don't expect to this to be posted on this page but whatever.

THAT SHOULD NOT BE ALLOWED. How dare they give this man OUR MONEY when he isn't even paying his share now. THIS HAS TO BE taken to the top. THE STATE HAS TO GET INVOLVED IN THIS CORRUPTION.

Well if they are going to live stream the meetings whats the deal with recording, like Brian Long quoted people must be expected to presume they are being recorded, what the Hell.

How did the coffee shop open with no hand rail or door numbers on the 2 business, the borough would not have let anyone else open???SLECTIVE ENFORCMENT AGAIN.

Use to be a sign on door of meeting room about recording .

Go one step further... how can the mayor say anything about finding Life Network when he is on their board? Next year this organization will be back for 100,000. Just watch. Is the borough going to give equal money to the other non profits too? Why just this one. They need to be self sustaining. They had a grant from CHI for 50,000 and Jamie screwed that up.

$250 to fight a $25 ticket , what kind of mind thinks this is ok? A person that thinks this is ok is not one to be on council. This is another thing that only the borough manager and council president thin is ok , BACK DOOR STUFF HAS GOING LON TO LONG NOW, THEY ARE SHOWING THAT THEY ARE TRULY NUTZ and not for the people .

No they are busy with their personal agendas.

Borough Manager Rebecca Denlinger stated that the quick ticket appeal remains at $100 for 2019. It is confusing when you read the fee schedule.