Horror descends on Columbia hotel as filmmakers capture the action 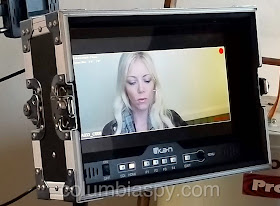 Veteran horror film actress Sarah French during filming of "The Special" at Smith's Hotel in Columbia.

A horror film at a Columbia hotel? Yes! Over the past few days, a film crew took over Smith's Hotel along Route 462 to make just such a film. Director B. Harrison Smith, whose credits include Zombie Killers and Death House, said his latest film, The Special, is a "horror story about addiction." He describes it as something you might see on Tales from the Crypt or Creepshow and that it has a "very odd feel to it." (For more information on the film, go HERE.) 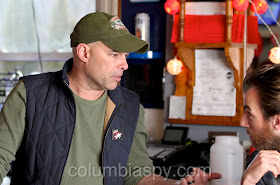 B. Harrison Smith directs actor Tony Barber in a scene at Smith's Hotel.

Smith, and Bob Smith (no relation) of Smith's Hotel allowed Columbia Spy unrestricted access to the film set this past Thursday and Friday, which included the bar area and second-floor hotel rooms. Besides the director, the contingent included several actors, plus personnel for editing, camera, sound, special effects, continuity, and makeup.

Using strategic scheduling, the film crew avoided interfering with hotel customers. For example, a bar scene was shot Thursday morning before customers began arriving at 11 o'clock. The crew then moved to the second floor for an afternoon shoot. All of Friday's scenes, except for one in the parking lot, were shot on the second floor. 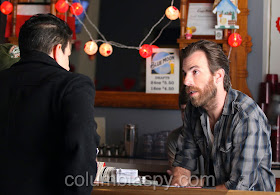 Actors Davy Raphaely (left) and Tony Barber perform a scene at the bar.

The bar scene features actors Tony Barber and Davy Raphaely, in which Jerry (portrayed by Raphaely) checks into the hotel, where a strange encounter will soon occur. Barber plays the "motel manager." (He also appears in the video "People Live Here" by the band Rise Against, which shows a town in the process of gentrification.) 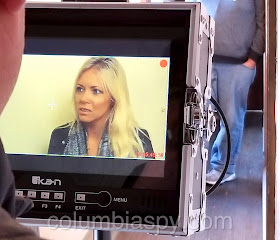 Sarah French on monitor as she performs a scene in the next room.

Filming on the second floor featured a pivotal scene in which the plot grows ever more twisted. Sarah French, who is well known in the horror film community, plays Jerry's wife, Lisa, in the scene. She has worked with Smith on Death House. 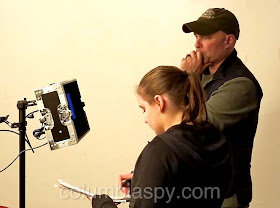 Horror filmmaking has come a long way since the early black and white "film" days, with digital technology now allowing a crew to be more mobile and able to complete a film in a relatively short time. Columbia Spy witnessed the capability of that technology first-hand as Smith and script supervisor Mel Baxter were able to watch each scene unfold in real time on a monitor as the action was being shot in the next room. Smith said the footage is captured on data storage cards that are transferred to a laptop for editing. Post processing happens later, in which color adjustments and other fixes are done.

At day's end on Friday, the crew wrapped up at the hotel, aiming to move to an undisclosed location next week. Shooting is expected to be completed within several weeks but the movie won't be ready for release until several months down the line, except for private screenings. Smith said a film typically can take up to a year from start to finish - sometimes a year and a half.

Smith explains that private investors have financed most of his films. His previous works include 2010's The Fields with Cloris Leachman and Tara Reid, which he produced and wrote but didn't direct. Smith's other films are Six Degrees of Hell with Corey Feldman, Camp Dread with Eric Roberts, and Zombie Killers with Billy Zane, Dee Wallace, and Mischa Barton. He also made Death House which he says has "the greatest collection of horror names in a single movie." In addition, he directed the action-comedy, Garlic and Gunpowder, which was shot in Los Angeles with Michael Madsen, Vivica Fox, Judy Tenuta, and others. 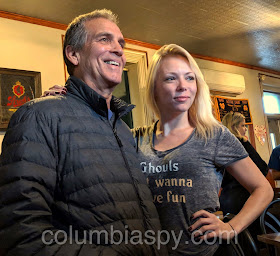 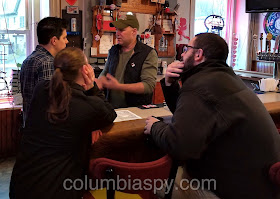 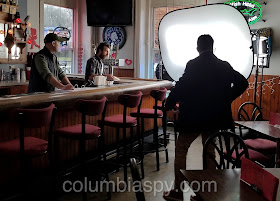 Smith, Barber, and Raphaely at the bar 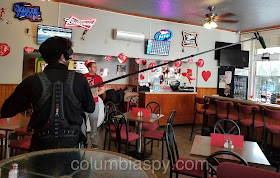 A microphone on a very long staff captures the sound in the bar scene. 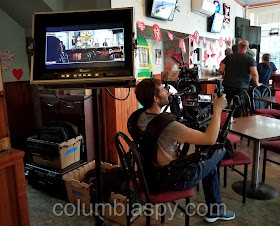 The monitor (upper left) shows what the camera is seeing. 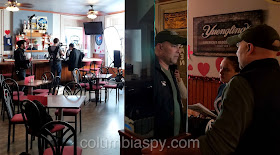 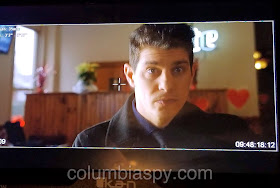 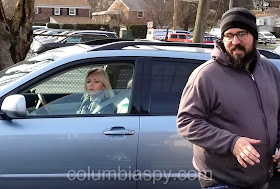 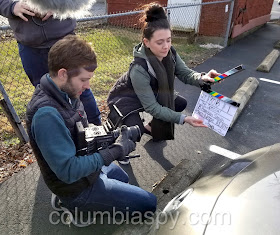 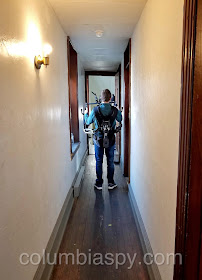 Director of photography Matt Nease lines up a shot. 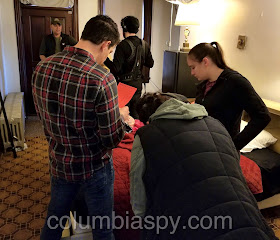 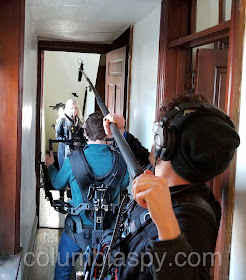 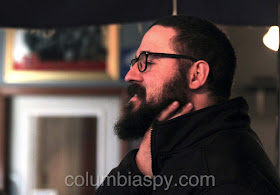 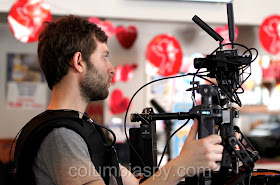 Matt Nease prepares for a shot.

Setting up a shot