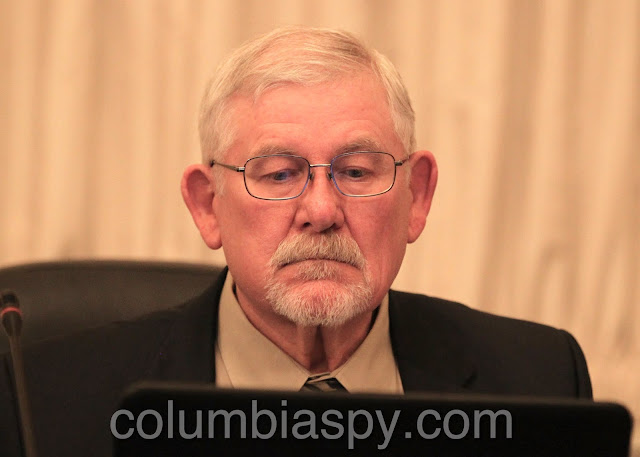 Columbia Mayor Leo Lutz reads from a prepared statement at Tuesday's borough council meeting, explaining his views on why a tax hike was necessary.

Columbia Mayor Leo Lutz read from a prepared statement at Tuesday's borough council meeting, explaining his views on why a tax hike was necessary. The statement (shown below) was first published at Columbia News, Views & Reviews.


"I would like to add a few figures to go along with Council President Murphy’s comments.

As noted, and I want to repeat, over the past 10 years Borough Council could have increased the millage in smaller increments, these discussions took place every year during Budget talks, but due to the economy the various councils decided to not increase the millage but to use General Fund Reserve monies. Was this wise? Maybe, Maybe not. Bottom line Councils decided that it was better to keep your money in your pocket rather than in a Reserve Fund.

Think about this, as reported, the tax increase based on a home assessed at $100,000 will see an increase of about $120. That amounts to just a little over $12 per year over the past 11 years.

During that same 11 years, contract wages increased an average of 3% compounded. As did administrative wages until this year. There will be no wage increase for Management Employees.

Wages increased $821,464 from the period 2009 to present. The 1.4 Mill increase generates $455,000 and does not cover the wage increase not counting the increase in medical benefits and retirement over that same period of time.

This figure is compounded by the decision to sell the Waste Water Conveyance System for about $8,000,000. Doing this the Borough assumed an average $120,000 per year in wages that were previously paid by the Municipal Authority.

Columbia Borough created a revolving loan fund along with other economic development funds that are matched with funds from County Agencies, like a First Time Home Buyer Assistance Program and a Program to offer low interest loans to residents to make façade improvements and necessary repairs or improvements. The Borough has partnered with Lancaster County Home Opportunity Partnership and Lancaster County Redevelopment Authority with these programs.

One of the reasons for the assistance programs to home owners is based on a conversation I had with a resident who needed to replace part of her sidewalk. She did not have the money to pay for the repairs and went to the bank for a loan. Her repairs would only amount to a couple hundred dollars but was told by the bank that the minimum loan she could get was for $5,000 at about 8% interest. She did not need that amount, nor could she afford to pay on a loan for that amount. The borough created a loan program for home owners with a very low interest rate for any amount to help homeowners.

Last year the Borough Budgeted $1.5 M for a revolving loan fund (Not a Giveaway) to assist business development. This program is typically used as a bridge loan to complete the financing package for a business being developed in Columbia Borough. This year the amount of $800,000 was included in the budget. This is not an additional $800,000 to last years $1,5M. When this Loan Program was created, the Borough Council received little or no negative comment.

During this period, the borough donated $100,000 to the Columbia Borough Fire Company for a new Fire Police Vehicle and bought the former Columbia Number 1 Fire Company building assuming their loan with an $800,000 to $1,000,000 balance. Columbia Borough values the service of our Fire Company and its volunteers and was willing to help financially. The Borough has been fortunate to be able to lease the building with the possibility of sale.

Many compare the Columbia Borough Tax Millage with other municipalities. Here is a comparison as an example;

1 Mill of tax in Columbia Borough generates about $325,000 and makes up 28% of Revenue, while Earned Income Tax generates 8 % of Revenue.

You can see the large disparity in Earned Income Tax Percentage. One of the important ways to keeping Property Taxes down is to increase the amount of business in the community which will grow the value of the community, create jobs and increase Earned Income.

We cannot afford business like Colonial Metals to shut down or move out of Columbia without having an aggressive Economic Development Plan to grow business and create jobs. This will increase the amount of Earned Income easing the need for more Real Estate Tax. The Borough is doing this.

Considering the fact that the Borough has not raised taxes in 10 years and has assumed those increases and costs noted combined with all the economic development and revitalization efforts, I commend this council and those council’s over the past 10 years for holding taxes to an average of $12 a year."

In an article for LNP, Mayor Lutz said people are tying the Revolving Loan Fund to the tax hike and that’s not true. In the same article, Mayor Lutz said if they cut the funds allocated for the Revolving Loan Fund it would ease the increase, but not erase it. So by his own admission it IS tied…when he just said that’s not true, WTF?
Sharon Lintner

He lies, look at the fence he lied about at the river park!! Look at the cottages meaning the land he sold for peanuts on the dollar get this man a straight jacket and through him in the rubber room!!!!

The $120,000 for the sewer workers did not have to be assumed by the borough. It was bought out. For any other employee this usually means they may keep you or get rid of you. They should have been left go. The plant was shut down. Colonial Metals is gone. They must have forgotten what they did to Kleen-rite. They wanted to expand and the Borough declined them. But yet they want to loan out another $800,000 making it over 1 million dollars to one person. Someone explain that one to me. And comparing Columbia to Manheim Township is like comparing a Rolls-Royce with a Ford? Perhaps no one objected in 2017 to that Loan program because no one realized one particular person was going to get 1 million dollars. And I can guarantee you you will never get your money back from that man. So now werew going to go up another $200 a year for the local tax when we just went up over $500 a year for the school tax. I guess when 2020 gets here and there's another increase on both taxes it's time to walk away. We can't afford to live here anymore. We are hoping to retire in the next 10 years. That can't happen in this town.

I heard a similar contradiction earlier in the meeting from a council member. They said the tax increase was necessary due to the increase in the "cost of doing business" and not due to the loan program. The Borough General Fund, as he said, is used to cover the borough's "cost of doing business". Then he said the $800,000 for the loan fund is coming from the General Fund.

The total expenditures listed in the 2018 budget (proposed) on the borough website is $8.1 Million. $800,000 is 10% of $8 Million. That's nearly half of the increase right there. At least that's what I feel can be deduced from the information made available to us by them.

That's a good point what they did to Kleen Rite was not right so why do they help an individual. Hotel Locust and the other bldg are a disgrace to our down town. And we are Columbia stop comparing us to other towns or cities. The Manager thinks we are Lancaster. Please consider the seniors who lived here many years instead of making them not able to afford their homes. Maybe the guys in Harrisburg can audit all this going on and straighten our little town out.

I get so reading comments that Harrisburg should come in an aduit the boro. News flash...audits by the state are done every year as required by law. Take some time and look them up!

1. i am a fairly new member of the Columbia community so the history is not known except for snippets read here and there.
2. i am not a fan of "anonymous" posting as in my thinking we all do well to own our words and to be accountable for any statements we made in a public venue.
3. i am thankful for the person who created and maintains this website. the information is quite useful, especially to one trying the learn the history and be part of what is best for the community.
4. as to the history: it would be helpful to know what has transpired in the last decade regarding businesses and individuals.
5. can anyone inform me of pertinent information?
thank you!
G Dillensnyder

Good explanation. When you sit back an consider the facts, the borough is in a tight spot. Like it or not, taxes increase. we all know that. Like it or not, our bills increase. we all know that. So do the borough's. I'm all for attracting more business here and doing what we can to keep the ones we have. Maybe if we had this program when Kleenrite was looking to expand, they could have used it to help them stay here. We always say we need more business and more jobs here to help with the taxes but we complain when the town does this to get them here. Everyone complained when colonial metals was shutting down and want the borough to do something...well guess what, the borough can't do much, but they can do some things.

There are lots of ways you can find documents from the past. The Borough meeting minutes are posted at its Website: www.columbiapa.net.

Columbia Spy and Columbia news, views & reviews for a long time and each has been chronicling events about Columbia and the area at their separate Websites.

So you gave borough employees wage increases during bad times without enough money in the budget and now you want taxpayers to bail you out ?

We all know taxes and other expenses go up But 21 percent is excessive and to those say it is only $210 per 100,000 this comes on the heals of a reassessment that increased my monthly tax by almost $200. So to me the increase of what I need to pay out 2600.00 on top of already high taxes I was paying before. I sure don't see raises anywhere near that. So I thought I would weigh in for those that think this is only about the borough increase and I am appraised at almost double the 100,000 so taxes are actually more.

borough employees are have union contracts that include raises, you can't cut their raises in a contract. And, to be fair, it wasn't be a few years ago that council tried to hold the line on employee costs during contract negotiations and residents stormed council demanding that the employees get a fair contract. How quickly we forget.