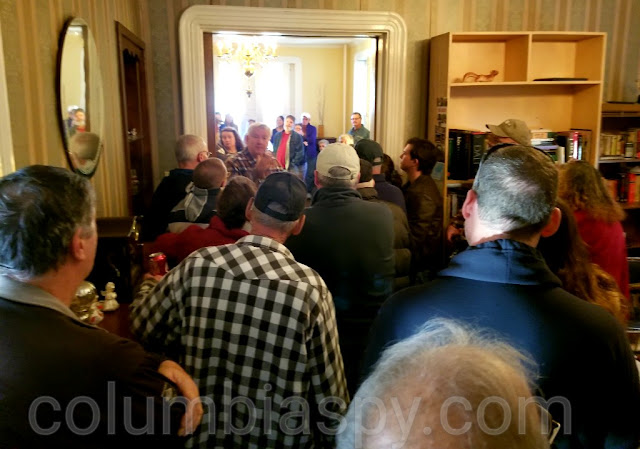 Over 75 people opposed to the borough's recent tax hike attended a meeting at 500 Chestnut Street on Sunday afternoon to discuss repealing the increase. Many of those in attendance signed petitions to repeal the hike. To date, about 1,100 signatures have been collected, with several petition sheets remaining to be collected from businesses and canvassers around town. The petitions will be presented at Tuesday's borough council meeting at 7 p.m. at the District Adminstration Center, 200 North 5th Street [UPDATED].

The petition heading states: “We, the undersigned taxpayers and/or residents of the Borough of Columbia, do hereby petition and demand that borough council hold a special meeting as soon as possible to do the following: 1.) To eliminate the $800,000 that was to be allocated to the Revolving Loan Fund in the 2019 budget; 2.) To repeal the Revolving Loan Fund Ordinance 897; 3.) To repeal the tax hike for 2019, thereby reinstating the 2019 tax rate at 6.6 Mills.”


Former borough manager Norm Meiskey led Sunday's meeting, telling the standing-room-only crowd that the 21.2% municipal tax increase was driven largely by a need to finance a $1.5 million revolving loan fund that provides funding to businesses in the borough at taxpayers' expense - and risk.

The program is capitalized through the borough's general fund and is administered by the Community First Fund of Lancaster. Community First requires no personal guarantees for the loan. At a special council meeting on December 13, 2018, Borough Manager Rebecca Denlinger said,  ". . . we might not get paid back. There's a risk involved, certainly."

So far, only one loan has been approved: $250,000 to a business entity owned by developer Don Murphy towards the purchase of Hinkle's Restaurant. Another applicant, Eberly Myers LLC, which sought to construct a 33-unit apartment building on the first block of Locust Street, had requested $400,000 (later increased to $650,000) but was denied. At a recent borough meeting, it was announced that Murphy has expressed an interest in taking over the apartment building project.

Columbia Borough enlisted Community First Fund to administer the fund, ostensibly to avoid bias in lending. One of the principals of the fund is David Nikoloff, whose wife, Janice, oversees the Columbia Economic Development Corporation. Nikoloff joined Community First as vice president of real estate lending in November 2018. Nikoloff, as a principal of AIM Advisors, completed a $75,800 biogas study for the borough in 2016. Columbia Spy reported on the study HERE. He was previously on the staff of Centric Bank, which provided initial funding for the Eberly Myers project. Centric reportedly loaned Murphy $880,000 on January 11, 2018.

Cole, I want to Thank You for doing everything to help the residents of Columbia! I cannot attend the meeting due to severe social anxiety but I stay in the loop because of you.

What was the result of the Biogas study, I wonder?

The study showed that the operation would not be feasible. As I recall, it was due to lack of "raw materials" available.

So will Columbia have the right to put liens on the property if the owner stops payment on the loan? What is the interest rate on these loans? What is the total returns for the taxpayers? This loan program could put Columbia in a very bad situation, and the loan recipients can walk away with rents in their pockets by paying low interest loans.
Investment in downtown Columbia is part-time workers making minimum wages, and will only benefit the owner and not Columbia taxpayers. Having one person monopolizing storefronts usually goes in a snails pace without more investors buying properties. Any study will show that it would take millions to turn the downtown district to thrive. Any homeowners that sells due to taxes, Columbia has the risk of a possible rental property in the future. With the new assessment, many properties will be a good risk for a section 8 housing investment. We must stand and take our government back, even though the lasting effect could be damaging from the current administration. Stand up Columbia!

So Murphy steps in and Everly Byers steps out. Their loan request denied. So let me guess Murphy is going to ask for the loan for that and it will be given to him. This needs to stop. We have roads that needs fixed along with a Walnut Street issue that needs rectified. I'm off for new business coming to Columbia that's great. However use your own money and I'm not for tax breaks either. We need that extra money from businesses that are coming in here to help with our tax base. We had McConley as a business in our town but the Council turned them down quickly now they've moved business out. Then we have a committee members husband complete a survey for the borough at $75,000. He is now VP of Community First, and was with Centric Bank who provided funding for both of the conglomerates I mentioned above. Seriously you all should be ashamed. You should go to Washington you'll fit in perfectly with the other politicians.