Agenda - School Board Committee of the Whole, January 3, 2019 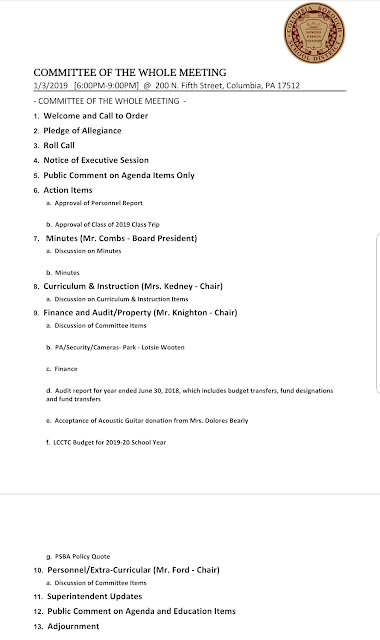 This is the meetings there should be more attendance at. The school tax is the one that is way out of control. The municipal tax is out of control as well for what you get. The truth of the matter is the borough wants more business in town to help with tax burden. Maybe they ought to consider with all the rental units in town that is the business and tax them more. As there is more resources needed for the additional people living in what used to be single family homes. Which means students in schools usually with special needs that drive the costs up. More trash on streets so need for weekly street sweeping. More crime which means more police overtime. Yeah River Park project is costing a lot but it adds something positive. Yes outside visitors should pay some kind of fee to help defray costs. Why should hard working home owners bear the cost only to find lot filled by others that do not contribute anything for it's use. Parking issues around town as a result of of multi units in low density neighborhoods where it is required to have 1.5 parking spots per unit. That's not happening and dirt basements required to be concreted again making some do but not most. Which is a health issue for residents and neighbors.

All good points made in above comment. Yes, school tax is killing us no argument there. Some school services are mandated by the state so we cannot escape them at this time. On the other hand, municipal spending is more flexible. The state is not going to mandate that Columbia operate a trolley or build a multi-million dollar parking garage. Council has the power to block spending on many items placed before them. Any project costing borough taxpayers a significant amount of money should be on the ballot. That type of spending should never rest in the hands of four residents. That's the number it takes to pass. I'm not comfortable with that.

We need real people like Elmer K. this stuff would NOT happen under his watch.

i agree MORE people should be attending the School Board meetings! The school district must close. spread the students betweem Eastern, Manor, Donegal, Hempfield. PERIOD. The kids that want to learn CAN'T anyway. Ask them about the craziness they deal with every day all day long. It's 100% UNACCEPTABLE. Close the school. Then SELL 500 RENTAL PROPERTIES, there's more than 900. The taxpayers HAVE to pay taxes to educate all these renters kids. CREATE A RENTERS TAX. EVERY RENTER WHO HAS CHILDREN MUST PAY $1,000.00 TWICE A YEAR TO EDUCATE. THEM. turn rental prpoerties back into single family owned homes.

Here's a black pebble in the tapioca, though (or is it rat poop?).

It's almost not possible to identify the number of rental housing units are in borough at any one time. While there's a list at the borough office, the definitions are tough to accept.

Besides the number of rental residences include a huge number of single family dwellings; trying to do what you're suggesting is trying to mandate to the folks who own those properties what they can and cannot do. That flies in the face of independent business endeavors.

Being a landlord is a way to turn profit and that's what's happening in town after town and city after city in the US since the most recent economic downturn. Lots of people are skittish about home ownership.

Your "renters tax" idea is not the answer to the State's reluctance to find a substantive solution to school funding. Pennsylvania is really stingy and allocates funding in curious manners.

Columbia Boro school graduates HOW MANY per year????? less than 100. and with our SCHOOL taxes costing $3,000 - $5,000 per year this is a no win situation. CLOSE THE COLUMBIA BORO SCHOOLS. CONSOLIDTE. with neighboring schools/counties.
ANYONE can buy a house CHEAP at sheriff sales then they turn it into a rental property. You mean there's NO WAY to create an ordinance to stop this from happening? Lancaster did something YEARS ago and that's when Columbia ended up with all these transients taking the bus from Lancaster into COlumbia. SOMETHING HAS GOT TO CHANGE!!!! COUNCIL BLOWS MONEY ON NONSENSE. STOP THE RENTALS.

Not sure Brian where you live in town but oviously it is not near a rental property. I do and the grass was mowed there 3 times this year. Leaves never gathered smoke detector rang on low battery for a month and a half. Tenants littered the areas around it with trash cigarette butts galore booze containers. Condoms hypodermic needles . And the list goes on. Tenants sat out on front porch smoking dope with their friends. You could smell crack Cocaine in the middle of the night when awoken from them fighting. So I could give a rats ass about the landlord as he put these people in those units and only comes around to pick up rent. It seems a little less glamorous now to have this for what you have been paying for years and years. And this doesn't include the harassment and things they do to your vehicle. Tax the Rental units heavily and that force rent up to a point where better tenants will be the norm. Tired of paying heavy taxes for these leeches .

Interesting Brian you apparently don't live in town. And the statement about what the property owner can and can't do is the Historic district. Of which nobody outside seems concerned with this allienation of the residents that had it imposed upon them. Most business have good oversight but not the landlords that don't care what there tenants do as long as they pay the rent.

some people have NO idea what its like living beside or near some of these rental properties. they should take a tour. sit out on porches and see and hear for themselves. you can request public info at the boro, there are more than 800 REGISTERED RENTAL PROPERTIES!!! that's NOT UNITS. Thats addresses/properties. If you count UNITS I imagine it would at least double. The rental properties ALSO take a HUGE toll on our police force. between the drugs, the domestic calls, complaints, etc. and guess what? They don't pay a dime for that service either. Peoiple wake up. Some things you have to fight for.

Not all land lords are bad, you can buy the propertys and resell to home owners , that is your wish so do it , I am shore every property has a price on it , there is your answer.

You right not all landlords are bad and not all tenants as I have had good relationship with both but not recently and police hands are tied unless they catch them in the act and mayor gives his little snicker and suggests moving. Why should you have to when you get along well with your home owner neighbors.