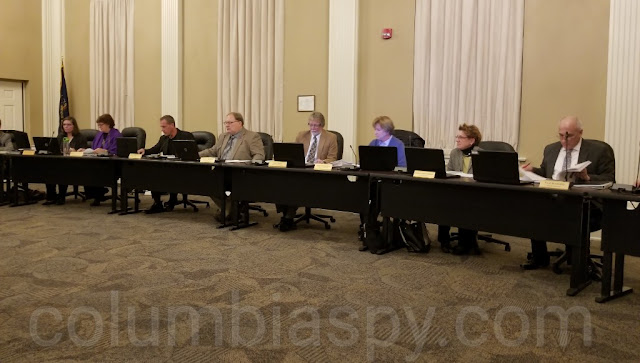 Over a hundred people attended Tuesday night's regular borough council meeting, the second such meeting this month. The meeting began with two presentations - one, an annual report of the Columbia Borough Fire Department from Fire Chief Doug Kemmerly; and the other, Susquehanna Heritage's annual report from Mark Platts and Hope Byers.

Council president Kelly Murphy acknowledged receipt of the letter from an attorney for the law firm Stock and Leader requesting clarification from the borough solicitor about the borough's Revolving Loan Program. Murphy explained that the issue is currently being reviewed by the borough solicitor. (No solicitor has been present for at least the last two regular council meetings.)

It was announced that Georgianna Schreck is retiring from the borough. Schreck was recently promoted to assistant borough manager from the position of finance manager. Borough manager Rebecca Denlinger will take over as the borough's open records officer. Schreck formerly served in that capacity.

Resident Frank Doutrich asked council about a meeting that occurred this past Monday night at Councilman Cleon Berntheizel's Second Street Cafe Garth. Councillors appeared initially stunned by the question until Berntheizel claimed the meeting was for the Republican committee. Columbia Spy has learned that the meeting included Mayor Lutz and his wife, council president Kelly Murphy, councilman Berntheizel and local developer Don Murphy, among others.

Council spent an hour attempting to hammer out the details of a lease agreement with Dennis Farina of K.T. Graham for the former Columbia Number One Firehouse at 137 South Front Street. Problems include questions about the building's tax assessment and the fact that the borough does not own the adjacent parking lot. K.T. Graham is a distributor of cranes and forklifts.


Councilman Berntheizel did not mention or offer a public apology for his recent late-night, profanity-laced rantings on Facebook towards constituents. No other councillors brought up the subject, nor did the borough manager.

Oh this is interesting, the private meeting at the cafe after hours. So the councilman says it was a Republican Committee meeting? How many members of that committee were present? What was wrong with where they “normally” hold their meetings? Are the two councilmen who attended the meeting actually ON the committee? If not, why were they attending a meeting with only a partial board present? As potential endorsed candidates? And lastly, if this was a Republican Committee meeting, why was a local “developer” present who does not live within the Columbia Borough jurisdiction, has no voting right and cannot be considered as a candidate?

Bob Dylan said "Maggie says that many say
They must bust in early May
Orders from the D.A."

“Not someone on a gang” seriously? Many men from Columbia workedon, survived, raised families and retired from working on “a gang.” Honest, hard working, citizens that should not be inferred to as being any less credible than the men who are members of the coffe club...how insulting to the hourly worker that the head office of tbe Railroad would be more credible.

The phone's tapped anyway
Maggie says that many say
They must bust in early May
Orders from the D.A.

Please understand that 3 of the 7 council members can meet and discuss whatever they want at anytime since there is no quoram. Im not advocating this, just stating the law.

Hold on there sea biscuit , look at the back door entry she made via council. +the mayor , anyone can bring other towns ideas here, seams like the revolving fund came when she was a consultant here . hum

It was told to me years ago that the Columbia No 1 Fire Department paid rent from the rail road so that they could use it for bingo parking. Why can the new people look into that? So this place is complaining about taxes? Ha welcome to Columbia. I also have a question that needs to be looked into. Why is our tax dollars going to the QRS and they barely made 50% of the calls and there paying EMTs to man it? Its paid or volunteer if paid then they should not take our tax dollars.


Clarification: I have never called council idiots. As far as my use of the word arrogant, that describes the behavior and remarks of a few of the six people that spoke at the meeting. I will leave the name-calling to the Republican councilman that is permitted to do it with impunity. I am more democratic than most because as a registered Democrat I have friends that are Republican, Independent, etc. I am more about the cause than the party. The affiliation is necessary to vote in the primary. Lastly, I do not begrudge anyone from their right to speak at a public meeting, it's funny though how these experts come out of the woodwork and know everything when they have never been to meetings to hear it for themselves. Sharon Lintner

Lutz made the "gang" remark.

Saying that I don't listen to others opinions is grossly inaccurate. I have opened my private home to the public several times to do exactly that. I challenge even one current council member to hold a public meeting in their private residence, not their business, their PRIVATE residence. Not by invitation or RSVP either. They don't even want to give you more than five minutes to speak at a public meeting. I did this three times in one month in addition to a porch petition signing in which the weather was so cold that we invited some strangers into our home to talk rather than speak outside in the cold. I've done more to listen to public opinion and I am not an elected official of this Borough. Sharon Lintner

As the new owner of the building, the Boro should have taken steps to transfer that lease agreement into their name. Instead, they have just been paying the recurring fee on behalf of the fire company. By them now choosing to rent the building to a third party, they can't just say the parking are is included. You can't legally sublet a property that you dont hold a valid lease for. It is pissible Norfolk Southern could decline to leade the parking are to the Boro. It is also possible they could jack the rent way up since it is no longer a non profit leasing the space. Regardless, it should have been hammered out as soon as they knew they would be leasing the building.

Sharon you are awesome, thanks for all you guys do.

Thank you. I'm not looking for any praise, just don't want to be incorrectly labeled. Some residents are lucky enough that they never had to experience living paycheck to paycheck. Lucky enough that they never had to be a single parent with a full-time job and still not enough money to make ends meet. Death or illness of a spouse can cut a family income in half. Many folks have worked full-time with no pension. Should they be publicly shamed for not being able to save enough money toward retirement? They were.
Sharon Lintner

As a resident and taxpayer on a fixed income I'd like to thank you also for all your efforts. God Bless

You know at one council meeting I stated before I went in, That if I were on council it should be a pleasure to meet with tax payers and listen to them outside of the meetings this should be a rewarding position to hold, I'd go to Hinkle's, Black Olive, Weis Markets, Musser's Grocery. Discuss matters that really matter to the Tax Payer. Discuss what our Idea's were to make it right in town. Of course not everything will suit everybody body. A lot of issues that on the table right now that will affect this town for years, needs to be fixed. VOTE IN NOVEMBER, ATTEND OUR CONCERNED CITIZEN MEETINGS

Sharon you don’t want to be incorrectly labeled but you go around doing it to everyone else. Remember karma is a bitch and what goes around comes around. I’m sitting around looking at this shit show you started with the same cast of characters. It’s beyond ridiculous to the level you have taken it. People from other towns think you have lost your marbles. Such blatant hate you have. Just remember you are not perfect either. You are just a very hateful soul

Please proofread your comments. It is very hard to comprehend what you are trying to relate. I certainly couldn’t vote for anyone who couldn’t express themselves more clearly

I love the previous comment. Be careful what you ask for, you just may get it

Wow! You're blaming Sharon for the 21% tax increase? For voting and passing an illegal ordinance? For spending more taxpayers dollars than what was there to spend so that you couldn't pay a new hire? Blaming her for hiring more employees than the taxpayer could afford to pay? You must be a special kind of stupid, like our current council or their spouses and friends who support your dumbass decisions!
This, councilors is the shit show YOU created!!!

To Anonymous at 3:38 PM: This "shit show" has now added 1,150+ people, so not quite the same cast of characters. I must have quite a following to have people in other towns think I've lost my marbles. Rather lose my marbles than my money, so I'll keep at it. Ahh Karma...I have plenty more that has yet to be said. Sharon Lintner

You keep going Sharon! You are getting to them, along with the other 1150+ taxpaying residents.

What people from other towns? One person from W. Hempfield? And maybe one State Rep. from York county?

Anonymous 3:38 I guess the rest of us are, Norm, Brian, Linter's are all beyond ridiculous, plus the over Thousand tax payers are to. Your invited to our next meeting and speak your peace. Howard Stevens God Bless

Well, anonymous @ 3:38 pm ... them's strong, irresponsible and incoherent words ... especially for someone who is too timid or cowardly to "demonstrate pride of authorship."

I'm pretty certain one person did not begin the "shit show" you state. It began with a citizen response sparked by a less than transparent action resulting in a tax increase. The tax increase might be explained; the lack of transparency and absence of widespread communication cannot.

That (hateful soul) is real big-boy, big girl speak, hurling names at people while donning the hood of anonymity is sheer terrorism. Take off the hood.

Methinks anonymous @ 3:38 pm may have started drinking much earlier in the evening today than he did before posting inebriated rantings 2 weeks ago!!!!

Anonymous 3:38, seems your the one filled with hatred. Seek help.

This is to expected, there are over 1000 Tax payers pissed, and possible 9 people who may run, if you think your right come to our meetings. CHANGE will happen. I will bring information from a businessman on what he has seen in this town and his comments at our next meeting.

Attention Concerned Tax Payers in Columbia, another meeting is in the works for us and those who have interest in running for Council, I'll know By Tuesday a location we may be able to get. I want to discuss this years budget and I will also present facts and suggestion from a business owner. Matters of concern should be brought up at this meeting, so that we are on the same page.