2018 Wrap-up: Citizens attacked for speaking out

"I would first like to address a concern that was raised following the last meeting. It was brought to my attention that a member of the public who spoke before this board voicing his concerns regarding the KOEZ was approached following the meeting and treated harshly. I'd encourage any member of the public wishing to speak before this board to do so without fear of being verbally attacked following our meetings. I'd appreciate it if members of the public resolved their concerns or disagreements at the podium and act with civility towards each other while you're on school grounds or here at the DAC."

The quote above is in response to an incident that allegedly occurred after the December 13th special school board meeting at the District Administration Center. 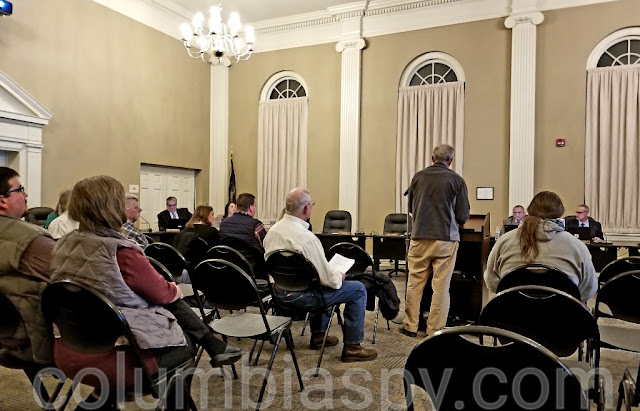 Attendees at December 13, 2018 school board meeting

It was reported by a citizen who had spoken at the meeting that he was verbally accosted with insults and profanity by members of another party afterwards. The attack was reportedly in response to his remarks opposing aspects of the KOEZ tax abatement program. Immediately after the incident, the citizen called Columbia Spy who subsequently contacted School Superintendent Tom Strickler, and later, School Board President Keith Combs. On December 18, the citizen was verbally attacked again by a person affiliated with the same party - this time at Stover's News Agency, with witnesses present.

After Combs read the statement at the December 18 meeting, the citizen reported the second incident to those in attendance and later contacted police. According to the citizen, he is currently in the process of contacting a lawyer.

Columbia Spy has also experienced similar, but less threatening, verbal attacks on borough streets and businesses from the perpetrator of the second incident described above. In response police were contacted, and legal remedies are being sought.

The incidents described above are examples of bullying, harassment and attempted intimidation. Such behavior can lead to arrest and be addressed through legal means. Columbia News, Views & Reviews has also published an article on the incident(s), as well as information on bullying and harassment HERE.
Posted by Joe Lintner at 2:38 PM

this is 100% UNACCEPTABLE. We pay the taxes. We pay Their salaries. And they continue to run this school district into the ground. Consolidate.