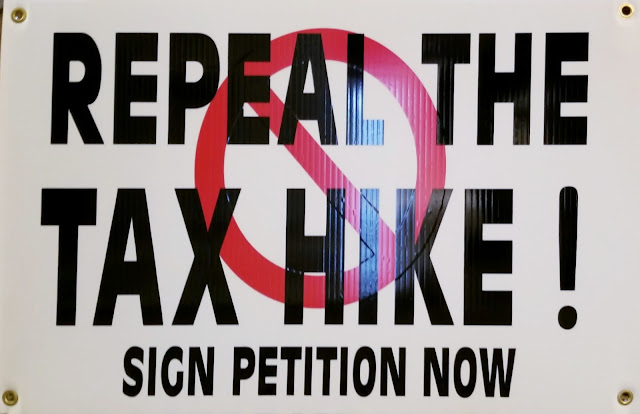 "They can all go f*** themselves. They all need to be voted out," said Robert Fritsch of Columbia.

How many in this group are not from Columbia. I believe Mr Nissley is one.He's from Hallam

My problem is with tax increase because the council spending frivolous money on Christmas lights for 462; the trolley;street scape; hiring and various studies with no money coming in plus giving away the bigler property and havring five followers on council who are obvously swayed by what Murphy and Cle want because of their egos.

Angry is a mild term , these people spend like there is no tomorrow ,they were elected to do the best for the town , all they did is poored money into the money pit, and made themselves and the town the laughting stock of the eastern pa , thank you A holes on council.

THESE PEOPLE ARE THE MAYORS PUPPETS, nothing more , they will all go out with a bang, election day is coming.

How about collecting from the people who still owe taxes? Have you seen that list?? Maybe the code enforcers could give them a "quick ticket" to fine them for NOT paying their taxes....why do we have to keep paying????

What non profit orgination in Columbia does the mayors son have???????

Neither of my brothers nor I operate a non-profit in town or elsewhere. Jonathan Lutz

If you’re not happy then run for local government. This funding is for the future of Columbia. Bringing businesses in town increases the amount of taxes coming in which will help fix roads, school system and everything else people are complaining about. Any business owner or person with financial experience knows that it takes multiple years to do this. I’m all for the tax increase. Hopefully it drives out the people that complain but don’t really do anything about it.

Several citizens have expressed an interest in running for local government. There's a good chance they'll displace the four incumbents up for re-election this year.

If, by "funding," you mean the revolving loan fund, it's to loan taxpayer money to business, a risky proposition. Even the borough manager said we're taking a risk with this program and might not get paid back. How does plunging us into debt contribute to the future of Columbia?

Bringing businesses into town does not necessarily increase the amount of tax revenue. KOZ and LERTA programs for business abate taxes, sometimes for 10 years.

It's fine if you are in favor of the tax increase, but why expect the rest of us to pay? If you are so interested in helping private business, then why not donate your own money or, better yet, start a GoFundMe account? All those in favor of funding business can do so there. Invest in the business and you might even get a return - maybe in 10 years or maybe not at all.

Finally, anyone who pays taxes in this borough has the right to complain about how their money is being managed - or in this case, mismanaged.

Whoever wrote that comment must be crazy. They are for a tax increase? What? Must be someone who benefits. He talks about people who complain but don't do anything but what has he done?

The legality of the ordinance behind the revolving loan fund is in question. The question is whether taxpayer dollars are to be used to fund the private business sector which stands to profit from those taxpayer dollars. So those residents who say they are in favor of paying higher taxes so that businesses can profit could end up supporting something that is actually unlawful

this towns local government is like Germany before the war , but the real americans are coming back, you can count on that.

a lot of valid points. I agree that ALL those COuncilpersons that we voted into office are doing all of us a great disservice for their uncontrolled, irresponsible overspending. We should be thaking Don Murphy. Thank you Don for improving our town. True Columbians would love to see it flourish again, with businesses, BUT you MUST BUY from small local business to keep them here!!! Do you have ANY idea what the hell it would mean if even 100 people showed up for a council meeting????? It's time to DEMAND ACCOUNTABILITY!!! AND PUT AN END TO WASTEFUL SPENINDG