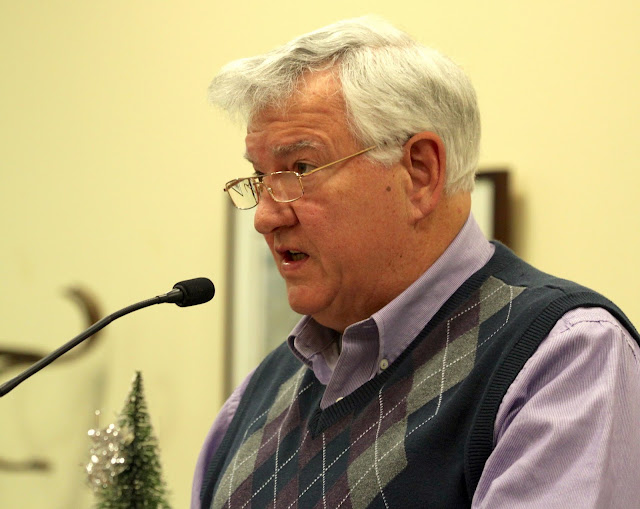 Meiskey: "Loaning the money out to certain individuals and certain zones for their private property improvement and their private use and enjoyment is wrong."

A business loan fund and an increased number of borough personnel are the culprits driving a purported need for a proposed tax hike for 2019, according to former Borough Manager Norm Meiskey. Meiskey, armed with a sheaf of papers at Monday's borough council meeting, also said the hike of 1.4 mills, or 21.2%, is unnecessary, unjustified, and just plain wrong. (Borough council plans to vote on the proposed increase this coming Thursday at a special borough council meeting.)

Meiskey characterized the borough's "Columbia Commercial Revolving Loan Program," which he calls a "slush fund," as unfair to taxpayers. The program was created by ordinance earlier this year to finance projects undertaken by local businesses by drawing funds mainly from tax revenue. In essence, taxpayers foot the bill to finance local businesses. The ordinance calls for a fund balance of $1.5 million to be made available to local businesses. Meiskey noted that the borough is planning to put $800,000 into the loan fund.

"There's already 1.5 million in there, and I still am very, very skeptical as to the legality of that ordinance," Meiskey said of the loan fund. "You don't help businesses whatsoever by tax increases," he continued. "You don't help residents whatsoever by tax increases that are loaned out for certain people, certain businesses, in certain districts in the borough." Meiskey cited mechanisms already in place to help business: LERTA, redevelopment authorities and KOEZ. "But the taxpayers . . . loaning the money out to certain individuals and certain zones for their private property improvement and their private use and enjoyment is wrong." Meiskey said he doesn't know where in the Borough Code it says municipalities can be a loaning Institution. 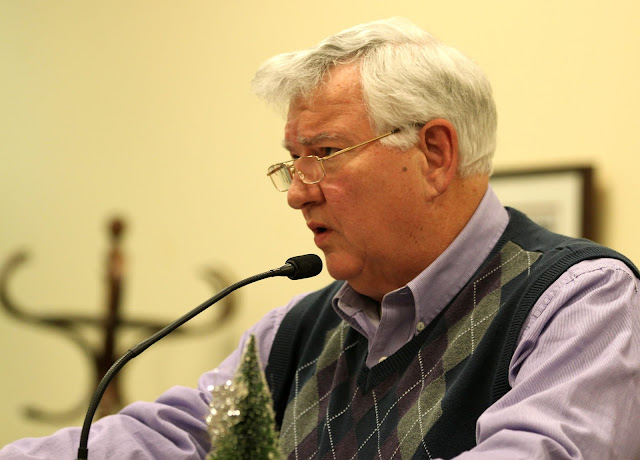 "You don't help residents whatsoever by tax increases that are loaned out for certain people, certain businesses, in certain districts in the borough."

Two businesses have applied for the funds so far. Cimarron Investments LLC, owned by local developer Don Murphy, received a quarter of a million dollars from the fund (according to Borough Manager Rebecca Denlinger at the November 26, 2018 Finance Committee meeting). Eberly Meyers LLC requested a loan of $400,000 for its Locust Street apartment project. A subsequent request for an increase to $650,000 was rejected.

"You're taxing the taxpayers of this community to loan out money," Meiskey continued. "Tax increases in this borough is nothing but detrimental to the taxpayers, the property owners - certainly businesses. That's the worst thing that can happen to them."

Meiskey cited an increase in the number of borough employees as another factor behind the tax hike. The 2015 sale of the borough's wastewater treatment system to LASA should have reduced the overall workload, according to Meiskey, who provided the projected workload reductions: 100% of two clerks, 50% of an accountant, one-third of the finance manager, one-half of the public works director, 100% of the wastewater treatment plant manager. "The plan was to allow attrition to take place" within two-and-a-half years, starting from June 2013, Meiskey said. The plan also included having the accountant and the borough manager handle budgetary matters and the borough manager overseeing the human resource aspects, due to a 25 to 35% reduction in the borough manager's workload because of the transition.

"Instead, we've hired people, and we've hired them to a point where you're looking at tax increases," Meiskey said. "That's not helping this borough whatsoever. It's certainly not going to help the taxpayers. You'll be taxing senior citizens out of their homes. It's a very serious matter." Meiskey noted that the number of clerks and managers has increased.

Meiskey noted that the average benefit package for a full-time employee is 35% of the salary and recommended hiring part-time employees to eliminate the need for the additional benefit expense. He said doing so would help preserve funds previously put together by the borough's Municipal Authority to afford the borough a financial position "like never before." The Authority was dissolved by council two years ago. 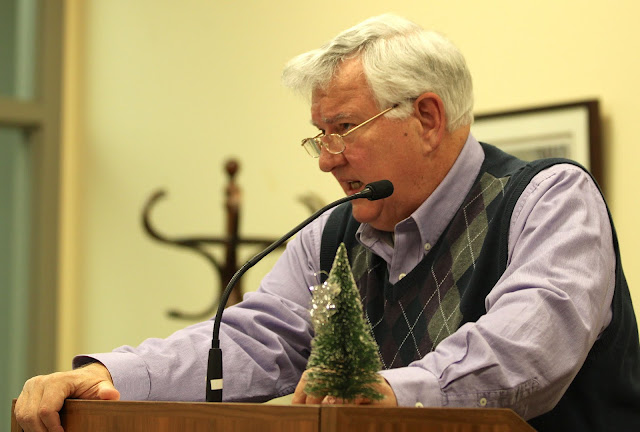 "There's just no way that you can justify a tax increase. There's no way - if the borough's being managed properly. The numbers speak for themselves."

According to Meiskey, auditors stated that the borough spent $6 million from reserve funds in the past year, with $18 million remaining in general and capital funds. "There's just no way that you can justify a tax increase," Meiskey said. "There's no way - if the borough's being managed properly." Meiskey added: "The numbers speak for themselves."

"We're going down the wrong road here for tax increases," Meiskey said. "There's no rhyme or reason for it. There's no justification for it."

Columbia Borough Council will hold a meeting on Thursday, December 13, 2018, at 6 p.m. at the Municipal Building, 308 Locust Street to consider adopting the 2019 borough budget and to consider adopting Ordinance No. 907 fixing the real estate tax millage rate for 2019 at 8 mills, which is $.80 of tax for each $100 of assessed real estate valuation, and represents a tax increase of 1.4 mills, or 21.2%.

Isn’t is illegal for the borough to be a lone shark. Especially with tax payers money? Columbia is not that big. Why are the taxes so high? The borough should publish exactly where and why all the money is being spent, right down to the penny. Toilet seats don’t cost $100.

Some common sense! So in essence, taxpayers are funding a project by way of increased taxes so an individual can get wealthier? Are we all entitled to profit sharing then when these projects become profitable? Where does the madness end! Maybe everyone in town needs to open a business and request funds.

We need Norm back in there he knows what he is talking about. Anyone could do a business if the boro lends them money and we the taxpayers should have a share in those bldgs it's our money. In
does this person pay taxes to the boro. Then again there are too many employees. The clerks don't even have to do the job as before less work like the sewer bill.. Too many codes people too. Lots of stuff in there we never had before and survived perfectly well. Taxes are running a lot of people from Columbia. Steve Kaufhold's position is a new one too. Thank God for Norm but who in there will listen to him.

Council man said cimmeron should get the 650,000 they wanted ,it was stopped, now we can see it will be in pieces.

We need to ban together and go to a meeting and let them know we mean business. Let's get behind Norm. He's behind us.

When did the boro become Santa Claus? I dunno whats gonna happen when I don't be paying municipal taxes, school, they sheriff sale the place off

It's easy to spend money when it's not yours. I would expect council members to be fiscally responsible. I know one isn't, evidenced by his leins and judgements, but the rest? Can any council member look the public in the eye and say he or she did everything they could do to cut expenses before increasing taxes? The answer appears to NO.

I've had to deal with Steve K, he's an Army vet and very professional, as long as you keep your cool, and give him some respect

I not real sure how all this works, but a state audit of columbia borough would show where all the money that comes in then goes,, unless they hide funds and put the loan shark under something else to hide it,, its not that norm needs to get back in, but sit down with him and get his ideas,,, uts early to tell who is gonna run for mayor of columbia next, but it needs to be someone that has lived here there whole life and never left to pay cheaper taxes in another township, then came back to columbia to run for an office,, lets face it, true columbia people are the only people that can fix the problems here

We personally cannot afford another tax increase after the $100 a month hike from county assessment & school tax increases. Guess it's time to leave this town. I've been here all my life but this is what poor management has done & no one can stop them. If what they are doing is truly illegal why are they not getting caught? Who do they need reported to & what needs said. Tell me & I will do it. I love our house & don't want to move but we cannot continue to see increases like this. Our taxes alone are more than the principal payment. And my mother cannot afford this either. The school & borough councils should be ashamed of themselves. Look what they are doing to all of us. Hoping karma comes their way very soon.

Can't afford the taxes charged now and sure wouldn't be able to pay rent anywhere.....seniors who wamt to stay in their homes have a very hard time doing so. Born and raised in Columbia but the taxes and other "happenings" here are bad...for lack of a better word....

I heard the word is in Harrisburg and things are being investigated. Hopefully we will soon see a change.

People who love the lending of money for stores and restaurants are the people who live in apartments and don't pay taxes. It's wonderful for them. If they paid taxes they might change their minds

Heard the word is in Harrisburg? What does that even mean? Who told you that? Where did you here it? When will it be investigated? How will the investigation be conducted? Who will be doing the "investigation" and what is going to be investigated, exactly?

I do not see or hear from the man that wants the hotel built! Is he done with thuis or is he going through with this without Columbia tax money?

I live in an apartment, and if taxes go up, that means rent goes up!!! Its economics

I love this town. But over the years, ive gotten to know some of these council members, and all I can say is that they are shady,,,at best. They are in their own exclusive little click and only worry about scratching each other's back. Who did they give the loans to? Don Murphy!?!? Any relation to the Murphy guy on the council?

MERRY CHRISTMAS FROM the borough council, I don,t know how they can sleep at night. I hope everyone tells them WHAT WE THINK OF THEM. I hope they have to look behind them all the time because people are telling them what they are , there are a lot of things that they are being called that we CAN,T write here , but youall know what those things are. A oath for the better of Columbia shorley is not being followed. Don,t go in there business or deal with them at there jobs, go to someone who cares , this 7 are about the money pit and things that don,t help the town or citizens , We can see a 13 million expansion of the money pit coming , hope they all (7) get there names in the paper , for BANKRUPTING THE TOWN.

In the summer our business had a "fire safety inspection". The code officer that did the inspection never looked at the fire extinguisher nor to he even go upstairs to make sure there were smoke alarms up there. Then we were charged for a half-assed inspection????!!!!