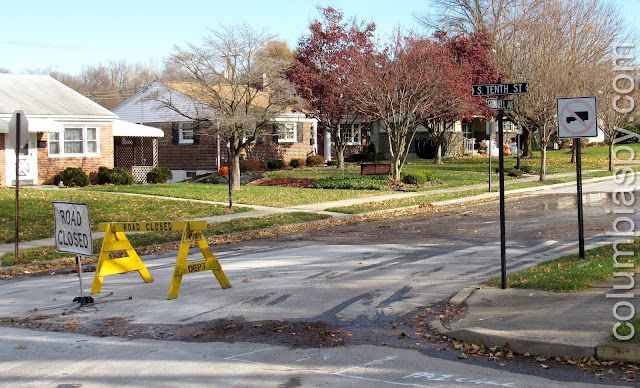 The 1000 block of Grinnell Avenue is currently closed to through traffic. The borough is set to fix a water problem there. (Note the spray-painted lines at the bottom of the photo.)


The borough is finally taking action on a long-standing water problem on Grinnell Avenue. As Columbia Spy reported previously HERE and HERE, water from an underground spring is continuously coating the road surface between 10th and 11th streets, creating slippery conditions. The water is being pumped to the road surface via residents’ sump pumps.

According to Zoning and Planning Officer Jeff Helm, the borough proposes to fix the problem by running an 8-inch drain pipe in a beauty strip along the sidewalk on the south side of the street. Homeowners’ drain lines will then connect to the pipe, which will be capped at the 11th Street end and connect to a new catch basin at 10th Street. The water will then flow down 10th Street to an existing catch basin on Barber Street. Homeowners will also have the option of connecting their downspouts to the pipe. The seven homeowners affected will need to sign an easement allowing access and maintenance to the piping.

Currently, Grinnell Avenue is closed to through traffic. No work schedule has been publicly announced for the project, although lines have been spray-painted along the beauty strip and at the 10th Street intersection in preparation for excavation.

The lines are a PA 1 call, that are required before digging!! That would mean they are going to dig to fix the problem

Should a larger pipe than the 8" be used? Not saying it is necessary now but it would be less expensive than opening and replacing in the future. Just a thought for discussion ........

I'm no engineer, but if enough owners op into running their houses downspout into the pipe, I'd imagine it's gonna be deja vu all over again

What about the spring at mussersmarket ????

Who is paying for this FIX!!!

Why are the taxpayers paying to fix a problem on private property?

I don't understand WHY this isn't the homeowners responsibility?????

They decided to use the 8" pipe because they had some on hand.

That's private property, but it's probably related to the Grinnell Avenue problem. Possibly the same aquifer.

The pipe and catch basin installation come from borough funds. The residents pay to hook into the main line.

is the borough going to pay for mussers too?

I don't think so. The owner will have to take care of it.

Cole, what am I not understanding? Why are we paying for the private issue on grinnel but not mussers? Not that I think we should pay for either, but why one and not the other?

NOW the borough is taking responsibilty for the water , great look at there mess on cloverton dr.

Most places it is illegal to run water on to a street.

If the house[s] were mine, I'd be digging up around the foundation,down to footers.Yes, it might become a pond. Run a sump pump, power wash the blocks, let dry, and apply a massive amount of sealer to exterior walls, let dry, backfill, pray...
Seriously who wants to run a sump pump for the rest of their lives, and next homeowner..

8 inch pipe? the water there now would be ok but adding rainspouts too? lol someones not thinking here