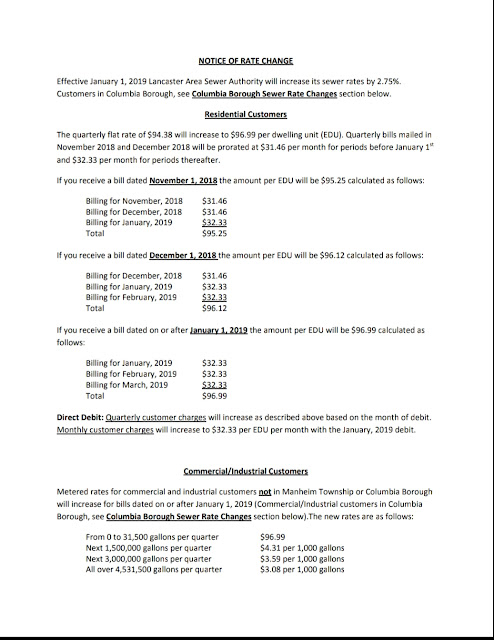 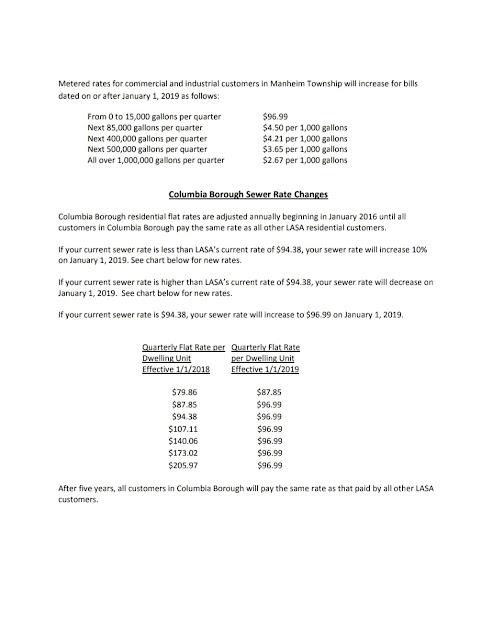 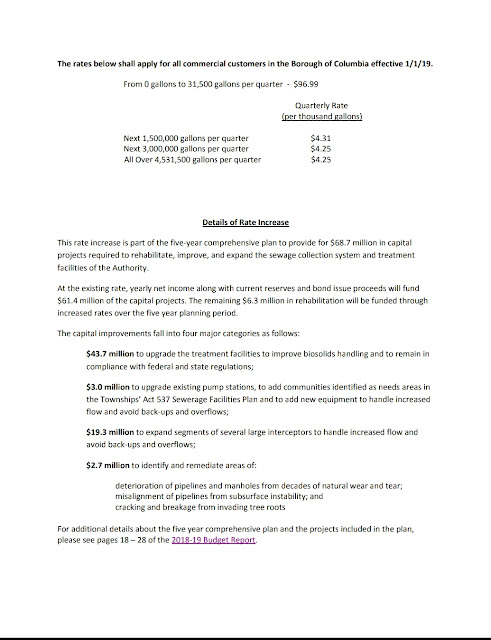 Mine is still a lot cheaper than before and fact of the matter is that it would have increased substantially if Columbia sewer would have done the major upgrade that was needed.

And you assume the old rates would just have stayed the same. Im happy with lasa even with the modest rate increase

Atlease you don't have Wrightsville Borough municipal Authority.... Our Water/sewer/trash Is all on one bill... I'm a single guy and my bill is $84.40/ each month

My LASA bill is still less than the old municipal authority and how many times would they have increased the rates if they still owned it? Can't imagine what I would be paying them today. Thanks LASA for lowering my bill :-)

Lets just say the sewer plant that was in Columbia should have been up graded! The Tax payers would still own it and money put back in the budget!!

That's not bad, would be cheaper than what we pay over here monthly for those same 3 services, for a household of 2.
Don't forget who owns the water company in Columbia and his rates are the highest in the county. Greedy bastard!!!

Money in the budget after how many years of paying off the millions of dollars in upgrade costs?

Wake up! What taxpayers own is irrelevant. What we care about is what this borough is costing us out of our wallets. 7 people control everything and they are running our finances into the ground right now.

Who owns the water company ? , I thought it was Columbia ??

Nope, the Columbia Water Company, according to a Lancaster Online 2011 article, states: "Columbia Water, owned by 120 to 150 shareholders, generates annual revenues of about $5 million and annual net profits of about $500,000, said President Donald H. Nikolaus."

Increasingly, information about who owns what is difficult to get. Layers of obfuscation muddy the waters.

As the competition for clean, safe, affordable water increases, the private water companies recognize the efficacy of having their own propaganda arm:
http://truthfromthetap.com/get-the-full-story/water-wise/?utm_source=Google&utm_medium=SEO&utm_content=privatewater_watercompanies&gclid=CjwKCAjwsfreBRB9EiwAikSUHYle6B1e4z5GXVQeHgFq2W6c8P6zx2S2tV861vFxtUWeFOIwDfnXIhoC47kQAvD_BwE

that's exactly right. we the people MUST attend boro council meetings. this council spends more money than probably a half dozen or more of our neighboring municipalities. NO ONE says NO! they act like they have an unending checkbook. it has GOT to stop. start looking and praying for some new people to step up as some terms will be up. There is NO excuse for the exorbitant amount of spending this council does. Is everyone one of them that blind? This poverty town can NOT afford this. The working class, taxpaying homeowners are the only ones keeping the town afloat. Someone needs to be smart and bring some tax base into town. (love the improvements downtown-thanks Don & Becky Murphy!) the riverpark ONLY needed restrooms and additional parking. now they want to spend another 8 MILLION or more on the next phase. There's no need to spend millions and millions and millions. WAKE UP. ATTEND THE MEETINGS. 2nd Monday at 7 pm.

And Columbia Borough RESIDNETS are the ONLY ones, the only town or municipality that must pay an additonal $8.50 EVERY MONTH, on every bill, FOR THE LIFE OF THE WATER CO LOAN.....AFTER THEY STOLE THE LAND. TRUTH.

People are bitching about a 2.75% hike on a sewer bill. What about the proposed 22% Columbia Borough tax increase?

hello...you KNEW this was going to happen. They promised NOT to increase rates for the first 3 years.

Paying a small fee each month in Wrightsville too. Well worth it!