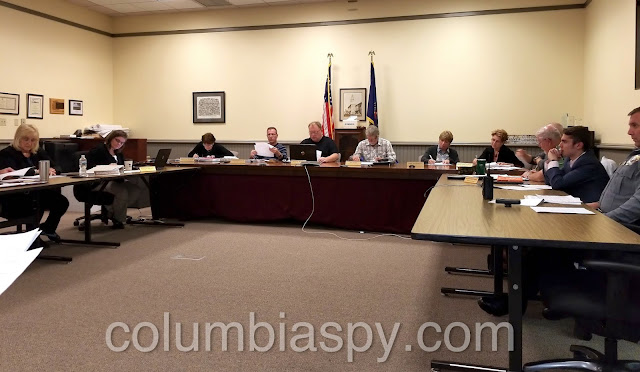 Council continues to dissect the 2019 budget, which Council President Kelly Murphy describes as already having been "ground up like hamburger."

For a while there, it seemed like Columbia had a new property inspector - and that still might be the case - but we won't know for sure until this coming Wednesday. As Columbia Spy previously reported, Jay Frerichs was promised the job at the October borough council meeting, and for all intents and purposes had it in the bag until Thursday's budget meeting when things went a little . . . haywire.

At the meeting, the purpose of which was to plan the 2019 budget, council realized it might not have the funds to pay Frerichs a promised $50,000 salary plus benefits. The item is not in the 2019 budget.

In the weeks preceding, Frerichs had been given the runaround over whether or not he even had the job. According to Frerichs, he was elated and ready to go after he was unanimously voted in at the October council meeting. Frerichs recounted that he was interviewed by Zoning & Planning Officer Jeff Helm and Code Enforcement Manager Steve Kaufhold on September 26 and said the outcome of the meeting was that "I was hired by those guys," although there was nothing in writing handed to him.

At a meeting a few days later with Borough Manager Rebecca Denlinger and Finance Manager Georgianna Schreck, Frerichs said he was also left with the impression he was hired. He was given a start date of October 22. Reasonably certain he had the job, Frerichs said he declined several remodeling jobs totaling $25,000 and gave notice to a construction company where he was a subcontracted sales manager.

Frerichs said he passed a required drug test and physical on October 18, but on October 19, three days before the promised start date, someone at the borough office told him the background check had not been received. He then waited another week, during which time he got no response from the borough, even though he called Kaufhold a few times. He then called the borough office and was told there were no updates. Finally, he called the state police who told him his background check information had been sent to the borough on Thursday, October 25. During an October 31 phone call, Schreck admitted to Frerichs that the borough had received the background check - which was clean - but did not have enough money in the budget to pay him, which Frerichs said he found "flabbergasting."

At Thursday's meeting, several councillors apologized to Frerichs for the situation, as did Denlinger, who said, "Not making any excuses for how this happened. This sucks. We failed."

At this point, Frerichs is left in limbo. Council scrambled to find funds to finance the position at Thursday’s budget meeting, but soon found it necessary to schedule an extra budget meeting, for this Wednesday, November 7. Council president Kelly Murphy promised Frerichs a “yes or no” at that meeting. Murphy also said a borough tax increase may be in the offing - from the current 6.6 mills to 8 mills.

A look back at how the timeline for the property inspector position has evolved shows that it was initially an item on the September 10, 2018 council meeting agenda, in which council voted to "Consider approval to initiate the process for hiring one full-time Property Inspector for the Codes Department." 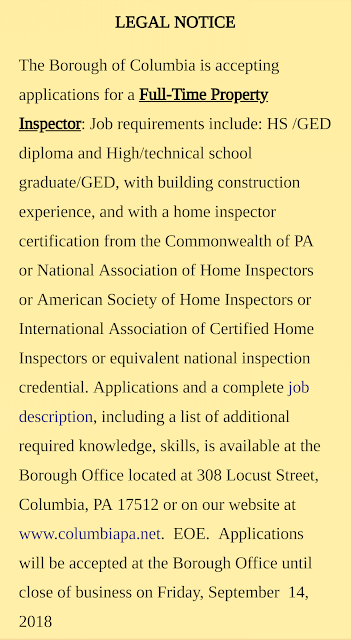 A legal notice above was posted, with a deadline for the position of September 14. As announced at Thursday's budget meeting, 12 candidates applied for the position and were subsequently whittled down to three. Frerichs said he was interviewed on September 26, and on October 8, council voted unanimously to approve him him for the position, with a motion "to approve a conditional offer of employment for Jay Frerichs as full-time property inspector at a time to be determined by the Borough Manager conditioned on the successful completion of all background checks and settlement of any terms and conditions of employment necessary to start Borough employment."

They did it again put the cart before the horse time.for all of them to go really bad that.You hire someone for a job before you check and see if you have enough money to pay them

We CANNOT afford any more tax hikes. The school tax is going up next year. There are too many code officers that are being paid. This proves this council doesn't know what they're doing. Does Rebecca know?

Typical inexperience showing, screw up a mans livelihood, spend money they don't have and put the burden on the tax payer's to fix.

Run Jay run this should tell what it going to be like.

The blame falls completely on the manager who is supposed to run the day to day operations. Council would be operating on what she is advising. No excuses..she needs to go!

I have to agree with "cart before the horse" comment because that's exactly what I said (but not in the comment here). Sounds more like the job should have been advertised as a temp position until the money runs out at the end of 2018. If they offer him the job that they already offered him, maybe he should re-think working for this group. Sharon

Yes she is not doing her job. The senior citizens and other people just CANNOT AFFORD more taxes for the mistakes of this council. Get rid of some codes people we don't need all them and stop buying new trucks. She also compares us with Lancaster we are a small town not a city. I hope the next meeting is packed with people getting tired of all this spending. That is a shame for Jay so cut sown on other people to get the money. School taxes are going up too. Council people must be rich.

and this is news????? of course they don't have any money. NO ONE makes them accountable. every single council person MUST go. the ONLY one that asks questions is John. The Council President is a J O K E! He Has NO idea how to run or control a meeting! BRING THAT GAVEL DOWN AND TAKE CONTROL.

can you believe this bs????? wow we're even more of a laughing stock now that this Council has decided to spend money WE don't have! i;m noit sure WHAT they don't understand! This is a POVERTY TOWN. And since the Borough SOLD the sewer plant, there is NO income.

No experience at borough manager, Thanks council , the back door got you again

TERM LIMITS . GET them out!

They spent over 300,000 on street lites for a state road , and the lites on locust st are NOT bright enough HUM but at the pit money is no object GEZZZZ