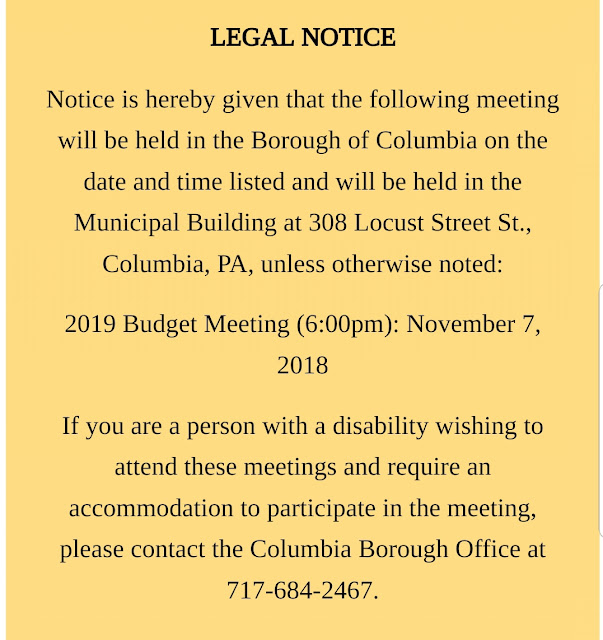 Council run the money like it is your own , we know you wouldn't spend it like your doing now.

When did Columbia become a city and what is counsel? FYI, Priority is bus routes not counsel, who ever they are homes.

I've not seen council members do anything borough related that would warrant them having their spaces cleared of snow FOR them. While it's hard to believe that this was done, I believe it! Hope we aren't paying for this anymore.

I wouldn't make it up I'm not that petty..we all got together and shoveled for him since they removed snow from the alley in 8th up to Kerry's off street parking behind his house...vw beetles aren't to good in snow I guess and he's a "priority" atleast that year he was

I think you mean Kelly Murphy not Kerry. This cou cil is going to bankrupt our town. We need Norm Meiskey back to run the boro.

Now this is funny. Would love to know where you get your information from. As a matter of fact, I recall having to call off work one day last year since I work 3rd shift and the Avenue behind my house had not been plowed open yet. You may note that I live in the 800 block of Walnut which is still one of the worst in town. If I had used any "clout" as you say, then certainly my block would have been paved before the 500 and 600 blocks, as my neighbors would have preferred and have expressed to me. Being on council I can assure you I would never do this and leave myself open to even more of the Columbia-brand anonymous BS online abuse.

Sorry but I am NOT a regular follower of the Spy and was made aware of this by a friend.

Kelly: We here at The Spy are not seeking, nor do we need regular followers. We have zero profit, in fact it costs us time and money to operate the website. We do not have any paid advertisers and that is by design. What we do have are the numbers to show how many people actually read the site, so like it or not, people are definitely paying attention. The readership is not limited to Columbia, we have folks from all around. When we decide to fold, our goal is to find one person willing to take it over in an even more passionate fashion. See you Monday!

Oh please I hope you never think of folding this is a really nice site all the nice pictures etc you put on and you keep us updated since there is no newspaper. You guys do a wonderful job. PLEASE stay

Sharon, you missed the whole point. This isn't about who does or doesn't follow this. I only made the comment to make those friends I have aware that there were multiple derogatory unsubstantiated comments made prior to my knowing. But I guess I will need to follow more closely.
Kelly

I will be posting pictures weekly on an Instagram page I will make to show the faults in Columbia the homes and rentals that aren't up to code the streets not touched by the sweeper and so on....if your block does not get swept when it's supposed to call it's what your paying for they have to....seeing I work for for a municipality...tax payers pay our salaries and pay for the streets yo be taken care of

Kelly I will see if my neighbor still has the video of the borough doing so...if he does which site would you prefer it be posted on...as I said I'll start an Instagram page with all the neglected properties starting from front street..as well as unswept streets because they didn't have anyone to write tickets as they say...videos of unoccupied police vehicles running which I was told not to leave my vehicle with keys in ignition...the police force out for their regular breakfasts..unpaid tax list which I see council members are behind on..could you answer why this is? Or could you all get together and pay for this person...I'm praying he still has the video because that will be the first one I post..and then you can argue if it was done or not

You should hear what people are saying about you on the streets !

Golden Knight for Borough Council ! - you have my vote

I moved so I have no voice but my family is all over Columbia...so I will do right by them on my soon to come page stay tuned folks it's going to be one for the books...I hope the talk on the streets is good because I'm all over the town still im across the bridge but always in Columbia only now since mr Kelly says I'm full of it I'll be on a mission with the camera...the golden knight will fight for those without a voice

All the Councilors ACT like they don't know anything. THEY are who CALLS ALL THE SHOTS. DO NOT lwt them fool you! The working, taxpaying residents of this town are DONE. FINISHED. WE'VE had more than enough. Something is VERY wrong.