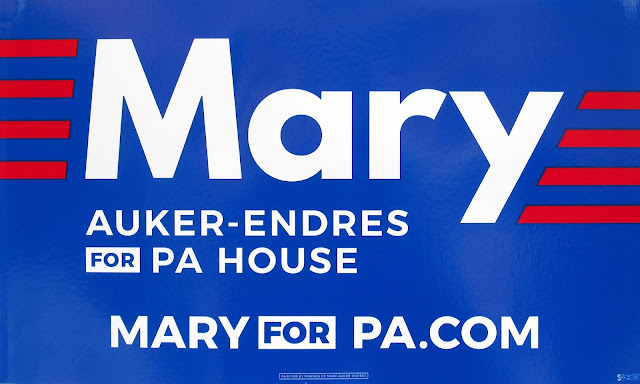 It's fall 2018, the leaves are falling, and it's time for Columbians to choose a candidate who will best represent them in Pennsylvania's 98th legislative district, of which we are a part. Right at the outset, we at Columbia Spy are announcing our support for candidate Mary Auker-Endres, and here’s why:

The 98th is currently represented by 8-term Republican Dave Hickernell. Or at least that's the rumor. Hickernell has been keeping a notoriously low profile. Very low. Virtually non-existent, in fact. If he is trying to be conspicuous by his absence he has succeeded. He has all but abandoned his Locust Street office and has not maintained a public presence in Columbia for quite some time.

In addition, Hickernell has routinely refused to inform voters of his positions on the issues. According to the non-partisan site VoteSmart.org, he has failed the Political Courage Test. The site states: “David Hickernell has refused to provide voters with positions on key issues covered by the 2018 Political Courage Test, despite repeated requests from Vote Smart and voters like you.”

In 2014, Columbia Spy noted that Hickernell refused to state whether or not he supports a natural gas extraction tax. And either by ignorance or inaction, he allowed Columbia to miss out on a portion of an extra $30.3 million in state funding. When questioned on the oversight, he replied, "Most representatives were unaware of the 'carve out.'" He added that it was clear "most of us were in the dark."

In a recent letter sent to Columbia residents, Mayor Leo Lutz touts Hickernell’s purported achievements, claiming he has added money for projects in Columbia that would create jobs and add parking for our downtown. Note the use of the subjunctive; no jobs have appeared and no parking has appeared due to Hickernell’s initiatives. The mayor also claims, “Representative Hickernell doesn’t just say he will do something, he does it.” Well, mayor… NO, that’s not the case, as we noted above.

Hickernell has kept his seat for 16 years, largely because he has rarely been challenged since taking office. 16 years – twice the duration for a two-term United States president – is enough for any legislator. And we believe it’s time for Hickernell to go. 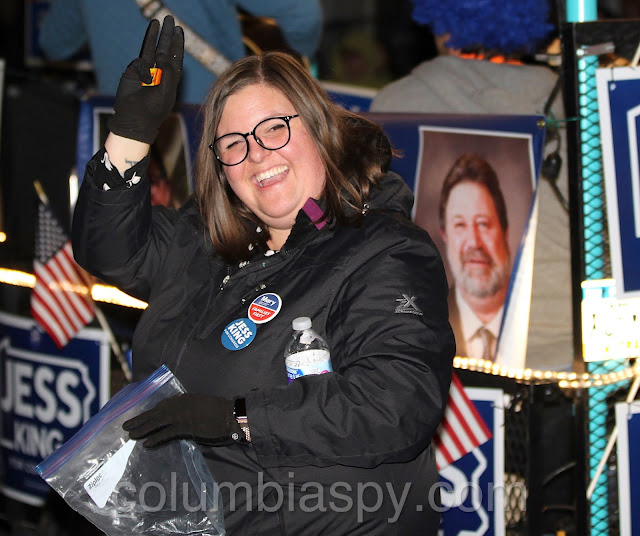 In contrast, Democratic candidate Mary Auker-Endres, has been quite visible in Columbia over the last few months, talking with residents, stating her positions, and explaining how she will work for them in Harrisburg. We believe she will focus more on the needs of working people and small business owners rather than large capital projects that continue to drain their tax money and provide them little benefit.

Auker-Endres, an Elizabethtown resident, promises to support initiatives that help working families such as increasing the minimum wage, ensuring healthcare coverage, and providing for quality education. In addition, Auker-Endres says she will turn down perks and will refuse a government pension until every Pennsylvanian’s retirement is secure. She also won’t take a paycheck if the budget isn’t done on time.

“Harrisburg isn’t listening, but I am. And I’m ready to act,” she said in a statement.

Here are a few links for additional information:

That's hardly fair or accurate. Representative Hickernell has had an office in Columbia since he was first elected. He and his staff have always been easily accessible,responsive, and very helpful. He has done great things for our residents and deserves our support.

Unfortunately, this endorsement is extremely misleading. First, a quick look at votesmart.org shows that the organization says that PA House Democrat Minority Leader Frank Dermody, Democrat Whip Mike Hanna, and lancaster’s own Democrat Policy Chairman, Mike Sturla have “refused to provide voters with positions on key issues covered by the 2016 Political Courage Test, despite repeated requests from Vote Smart and voters like you.” I’d bet that few, if any PA rep has answered this group’s survey. The Spy also conveniently fails to mention that PA already has a shale tax, and Hickernell voted for it.
And, while the Spy wants to argue otherwise, Representative Hickernell has a proven record of leadership, integrity, and service to our community. In this day of “political reform,” Hickernell has led the charge, campaigning against wasteful government spending, taxpayer-paid trips and junkets, and pay raises. Hickernell wrote legislation to ensure that our schools receive the crucial funding they need when state budget battles loom, only to be vetoed by former Governor Rendell. Representative Hickernell has been a true partner of our community helping to secure needed grant money for our town, funding for our schools, and services for our residents. Finally, Hickernell has fought for property tax reform and school funding on each and every occasion because he understands the challenges we face.

And yes, he has maintained a full-time office in town for the past 16 years. This office has served thousands, helping folks with rent rebates, driver and vehicle services, low income heating assistance, serving as a conduit between state government and residents here. Hickenell doesn’t hide, he helps.

Facts matter. And the fact is, Hickernell is a proven leader deserving of our support.

Fair? It isn't a question of fair. Most representatives have good staff. They do most of the every day ombudsmen work. But do you really think Representative Hickernell himself gives a rat's ass about this town?

I pass Hickernell's Columbia office nearly everyday. I have yet to see any signs of life. The sun faded, fake plants in the window clearly reflect what's going on...neglect.

You're right. Facts DO matter. That's why we've taken the liberty of publishing this excerpt of a recent letter to The Elizabethtown Advocate by David Eichelberger:

"Rep. Hickernell has been in office, largely unopposed, since 2003. He currently serves as the Chair of the House Education committee. What education-related legislation has he sponsored that reflects an understanding of the practical realities within his own district? His name appears on 167 bills in the 2017 session. He was the primary sponsor of only 11. Of those, only 3 pertained to education.

HB1002 was to allow social studies teachers to claim credit for taking theology courses because they are required to “teach about world religions” (theology courses specific to one religion are by definition not “comparative” in an academic sense). HB648 was intended to allow for schools to borrow money to fund operations in the event of another budget impasse (seems reasonable). HB1744 was intended to defund Educational Access Programs for “libraries, museums, community centers, historical societies, and musical theatre” — because they were in other school districts (which seems petty). However, none of these even went to a roll call vote.

When his mailer states he “delivered record funding” and “provided $60 million in school safety grants” (Act 44 — SB 1142), it means he along with many others simply voted for a bill that he had no direct involvement in crafting. Yet school funding would have been even higher if he had not voted with former Gov. Corbett to cut school funding a few years ago. And perhaps he would like to explain why there is currently a lawsuit against the state Department of Education from six other districts “on whether state officials are violating the state’s constitution by failing to adequately and equitably fund public education.” Where has he been on developing a fair and sustainable funding formula?

What he means by “supports local control” and “promotes technical education” is that there is no actual legislation on those concerns. Just a couple sound bites for his mailer.

He also states he opposed an increase in the state sales tax and also wants to eliminate property taxes. Exactly how does he propose funding the schools he represents in his committee?

the truly “able-bodied” don’t need much healthcare. Instead, those disenrolled “able-bodied” would be denied acute and preventive care – increasing the chances that their inexpensive or undiagnosed issues today become very expensive issues tomorrow. Worse, given the complexity of verifying twice a year whether 500,000 Medicaid recipients are “working or exempt” ensures that many deserving recipients would inappropriately lose coverage. Those are precisely the concerns that led the courts to block Kentucky’s very similar Medicaid work requirements law over the summer."

Yep - It makes perfect sense that Leo would support him.

oops - that was meant to be posted under the Spy's response, not under the negative comment

Doctors everywhere would be the FIRST to STOP ABLE BODIED persons from feigning disability (merely because they have anxiety, are overweight, etc), BUT these State Representatives MUST pass bills that REQUIRE certain criteria. FREE AID, FREE HOUSING, NO TAXES, FREE INSURANCE WAS ONLY MEANT TO BE FOR EMERGENCYIES! NOT I REPEAT NOT FOR A WAY OF LIFE. All this free aid bs must stop. Every hardworking American citizen MUST pass drug tests to support able bodied people....but the recipient of ALL these FREE services just keep on collecting money each month and do ABSOLUTELY NOTHING IN RETURN. STOP THIS DISSERVICE TO WORKING PEOPLE!