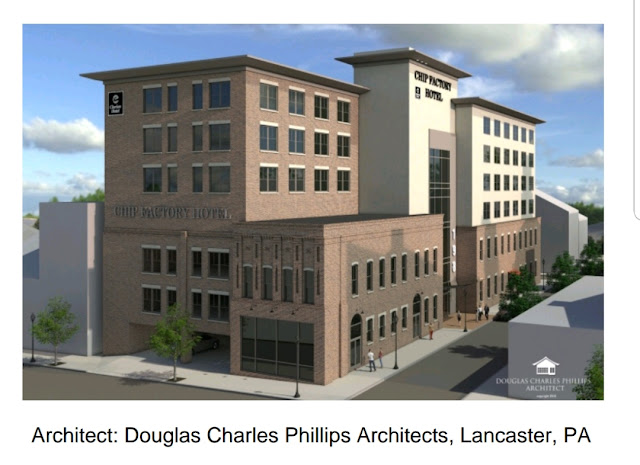 The proposed parking garage will be built separately from the planned "chip factory hotel" at 12 North Second Street and will require an updated design for the hotel.

Attendees at this week’s finance committee meeting received a last-minute revised agenda that packed a surprise: The borough is looking at funding a $4 million parking garage in downtown Columbia related to, but not dependent on, a hotel project already in the works. (Columbia Spy posted a press release about the hotel project HERE.) The proposal was presented as an attached one-page (plus two-line) "Project Description," which is a summary of the planned project, as shown below. [Editor's note: Some of the information contained in the summary differs from that which was discussed at the meeting.] 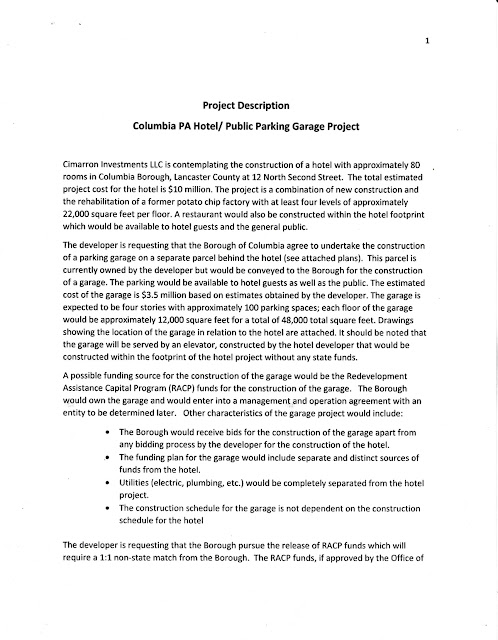 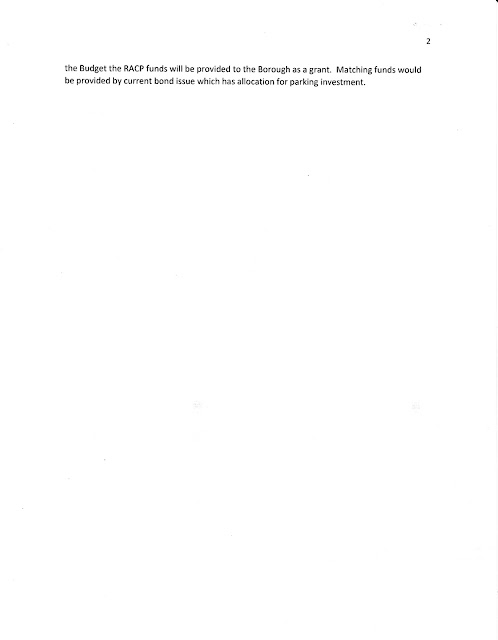 Under the proposal, the borough would plan and construct a four-story parking garage behind the former Becker Potato Chip factory at 12 North Second Street that Cimarron Investments LLC is redeveloping into a 60-room hotel/restaurant. The garage will contain 100 paid parking spaces, 60 of which would be reserved for hotel patrons, i.e., one per room. The remainder will be available for public use. The hotel building would contain elevator access to the garage, and parking would be overseen by some sort of management entity, such as a parking authority.

At the meeting, Cimarron CEO Don Murphy presented a tax map overlay and updated design for the project, showing how the garage would be built on a parcel behind the hotel. (The original plan was for hotel rooms to be built over a parking area.) The parcel, which is currently owned by Cimarron, would be conveyed to the borough.

Garage construction would be funded through a Redevelopment Assistance Capital Program 1:1 matching grant. According to pa.gov: "The Redevelopment Assistance Capital Program (RACP) is a Commonwealth grant program administered by the Office of the Budget for the acquisition and construction of regional economic, cultural, civic, recreational, and historical improvement projects." If a $4 million RACP grant is approved by the state, the borough will pay half the cost of the garage: $2 million. [Editor's note: The $4 million figure was quoted by borough manager Rebecca Denlinger at the meeting and differs from the $3.5 million presented in the summary. Denlinger told the committee that she uses a $25,000 to $30,000 per parking space to estimate the cost of a parking structure. Using those factors, however, the product does not equal $4 million.]

Murphy said the borough's funding of the garage would make the hotel project more feasible for Cimarron, because the company would not be required to abide by prevailing wage laws (and would obviously be spared from funding, maintaining, and managing the garage). If the RACP application is denied, a combined hotel and garage project could still be completed but on a smaller scale, with parking available for hotel patrons only, according to Murphy.

Denlinger noted two other mechanisms available to bring funding to the project: a Keystone Opportunity Zone (KOZ) designation and a Qualified Opportunity Zone designation. According to Denlinger, the KOZ issue is currently before the state legislature, and the borough should know by year’s end whether it will be approved. According to pa.gov: "Keystone Opportunity Zones eliminate specific state and local taxes within specific underdeveloped and underutilized areas." A Qualified Opportunity Zone designation has already been approved, however. Denlinger said that quite a large area of Columbia has already received this federal designation, including the block where the hotel site is located. irs.gov states: "An Opportunity Zone is an economically-distressed community where new investments, under certain conditions, may be eligible for preferential tax treatment."

The finance committee voted to move forward with the next step of the RACP process to fund not only the hotel project but also a semi-defined project for the market house. If this second step is approved, the state will invite Columbia Borough to make a final, more detailed, application, at which time, the borough will be required to commit taxpayer funds.

Last spring, the borough briefly considered granting Cimarron $650,000 to help fund the hotel project until it was found that doing so would be unfeasible and illegal. Former borough manager Norm Meiskey and several citizens spoke out against the intended grant at the June Columbia Borough Council meeting. Columbia Spy posted related articles HERE and HERE.

Ask one question, "Who benefits?"

DO IT!!! Its a win-win for everyone. If your read all the information - a RACP Grant is provided by the state for projects just like this. If we don't get it, some other town will. The bond the boro has identified funds for parking projects. And the boro gets a first class international hotel brand in a blighted building in the downtown. Look at what they have done in town already. Hinkles, Gift Shop at Hinkles new Café at 3rd and Locust, Community Life building, Family First Health, a brewery coming and I saw a pharmacy on facebook the other day. We are lucky to have the Murphys in this town doing these projects and doing them top notch. beautiful work - keep going!

Murphy said, if the RACP is denied a hotel and garage project could still be completed but on a smaller scale! Well let him do it himself with out TAX dollars! He wants it let him do it! This big parking garage should be on the VOTING BALLET for the TAX PAYERS to VOTE!!!!!

What is happening in this town? To spend that much money with our tax dollars is ridiculous. Spend money for the 10,000 people who live here and pay taxes the streets are like washboards. Put some recreation things for people to enjoy. Seems like it's getting worse with Rebecca in there. I agree we need more conservative on our boro council

That's too rich. I love people who think grant money grows on trees. So now we need to spend millions on a garage for a hotel that may or not be built (or survive) in addition to starting a parking authority? If the project is that viable - let the PRIVATE sector fund it. Period.

Guess it's true... there's no end in spend. Wait a second?

"Bond" funding is not free money. Some are leading us to believe it is.

The Pennsylvania Department of Community and Economic Development provides a handbook on how to get a referendum on the ballot. Have at it!

sounds like a downtown Lancaster Marriott scheme. Next they will put a local lodging tax on all local B&B's to fund their pet project

Well, there you have it. The anonymous commenter says there are directions on how to get a referendum on the ballot. Perhaps the commenter can be more specific; here's the link to the reference:

Go ahead; read through it, everyone. When you find the specific reference in the Referendum Handbook, do everyone a favor and point out the exact page that allows a borough to "hold a referendum on a parking garage." Please.

Having read the entire document, we're puzzled about a referendum a borough.

While you're at it, Mr. / Ms. Anonymous Commenter, why not identify yourself?

this news actually makes me vomit

Also these people that want this building done never went to columbia high or even live in this town!!

So what????? Never went to Columbia High but still paid taxes and tuition. You're ridiculous with that comment!

Columbia borough has 3 lots within a block of this hotel and 5 within 2 blocks. WTH

Council don,t do this , it will be a nail in your box.

voted out will not come SOON enough.

Give him the ground up river from the money pit and tell him to go at it.

yes they have enough parking

If you are referring to Don Murphy, he graduated from Columbia High in 1991. I should know this because I was in his class.

extend the money pit with a hotel along the river, ah makes to much sense.

He had a classmate named Anonymous?

Wow..someone can't comprehend the wording in the referendum manual. A referendum can be held for debt authorization which is what this is about. Obviously there is no specific reference to a parking garage..how stupid would that be.

It was so nice for the boro to provide a lot for people to leave their cars in at the bottom of locust street. Beats paying storage fees at the place down the street, I guess.

Thought the parking garage was going to be behind Hotel Locust on Third Street ? - Putting it on Second Street will kill Forth Street

The comment above ^^^ was apparently written by a council member.

4 million dollars is a lot of money for this town as for parking!!

3.5 million? Ridiculous. One grand but still a million or more from taxpayer dollars. Our mortgage just increased by $100 a month from the increase on assessment plus school tax increase. We will soon need to move cannot keep affording such tax increases. DON'T DO IT... COLUMBIA CITIZENS CANNOT AFFORD THIS STUPIDITY!!

Plus making a parking police to run the thing HUM this is Columbia not Lancaster or York MORE GOVERMENT not on my dime.

I hear yah my mortgage went up $180 / month due to school tax. And for what? Sure as hell won't be able to retire in this town after living here most of life.

school is FAILING be the first to go online.

Smaller scale , what ever go it on your own , not tax payer monies , borough has enough parking with 5 lots within 2 blocks of the purposed hotel. Council people pay up your taxes before bringing more ideas for others and make sure there taxes are also paid up , this should be a no brainer, most towns would not have people on council that owe back taxes.

let council pay the money back out of there own money , see how that goes.

really if there is 5000 houses in Columbia they could give the owners $1600 each to put lip stick on there house.

Are you sure Joe? What evidence was your impartial comment based on?

Cimeron who else could?

Get a hatchet man to clean out the borough and school , to many dead beets with No common sense.

This seams to follow the hole in the ground on locust st.