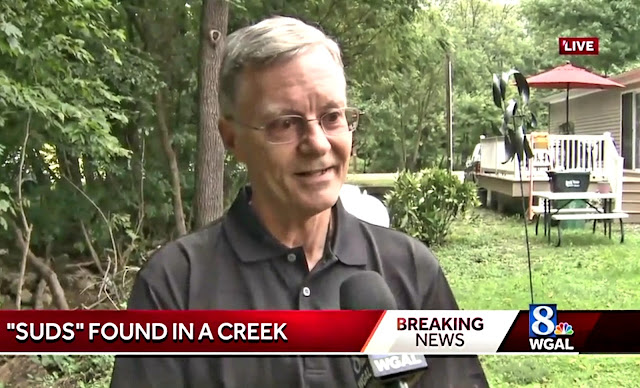 Jeff Helm talks to WGAL'S Katelyn Smith about suds in a creek along Purples Lane.
Jeff Helm, with Columbia Borough, said he has seen the foam going into the river and he's not sure what it is or where it's coming from.
"It's obviously some type of chemical spill that is in a piped stormwater system," Helm said. "We don't know the origin yet, we've traced it back as far as we can."
MORE:

According to Jeff Helm (as cited in the article), the Columbia Borough Fire Department.

When will Mayor Lutz, Jeff elm and the rest of the HIGH Salary people get off of their DUFFS and start walking the streets of the Boro just to see what their LACK of duty is doing to this Boro. GET OUT AND ENFORCE THE LAWS AND RULES. THIS TOWN IS FILTHY.

Come on the enforcement of Columbia is SELECTIVE, beside the mayors house and a house between a home owned by Helm did major excavation and electrical work with a pipe running storm water on to a state road behind a retaining wall was all done with NO PERMIT in the window. It was worked on for months and nothing was done. SLECTIVE ENFORCEMENT!!!! But by god if someone does things in other area code enforcement is right there, like a church painting (blue) parts and got stopped. SLECTIVE ENFORCEMENT still going on for some like the last 25 years of the zoning slash code inspector work at the borough.

i agree that the CODES DEPT and its many many personnel SHOULD BE OUT WALING THE BEAT EVERY SINGLE DAY. ESPECIALLY DOWNTOWN. NOT sitting at a desk. Or just riding around the same properties over and over and over.