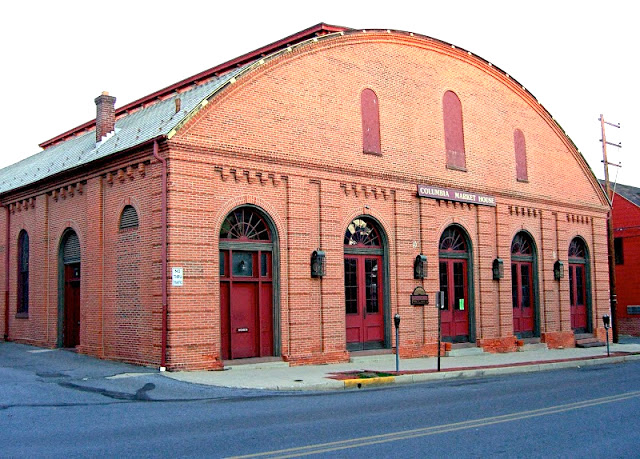 [Part of this article was published previously on Columbia Spy.  NOTE: Another proposal for the Market House, from Royal Square Development & Construction, will be presented at a special meeting on Tuesday, September 18 at 6 p.m. before the Public Works and Property Committee meeting.]

At the September Columbia Borough Council meeting, Philip Goropoulos of Catholic Health Initiatives (CHI) presented a proposal for use of the Columbia Historic Market House, which has been vacant since December of last year.

Goropoulos said the proposal was worked on by committee for about a year to “revitalize and re-energize” the Market House. CHI will equip it and get it set up for operation. Once the equipment is placed in the Market House it will become assets of the borough. CHI will also cover all utilities.
The proposed management agreement calls for the initial term to be for five years, after which it becomes a year-to-year. Within those five years, the structures, market traffic and consumer base will be created, with the focus on the needs of residents. If all goes as planned, the operation will be financially self-sufficient within that time, after which the borough may decide whether to assume operations of the facility. If the borough is not ready, it can decide to continue the agreement with CHI, according to Goropoulos.

All profits made while CHI is participating in the operation will be deposited into a trust specifically for the Market House. When operations are finally transferred to the borough, the funds will also be transferred in order to continue the operation.

Major renovations to the building will be the responsibility of the borough, but CHI will be responsible for renovations for the restaurant. Revenues will be written to CHI, and lease agreements with vendors will come to CHI. CHI would absorb up to $65,000 of losses per year. If losses exceed $65,000 per year, CHI will meet with the borough and report that. “If everything goes badly, you’re still talking about $400-500,000 dollars coming into the borough from CHI,” Goropoulos said.

“There’s a buzz that we’re generating in Columbia.” he added. “I think the combination of the hotel project, child care center, other activities in Columbia are starting to create an excitement in the town and in the community that's going to create kind of a wave that I think the market can help ride and bring more people in.”

Councilman Cle Berntheizel was also optimistic about the proposal: “I remember a time - being on council in the 90s - when realtors in Lancaster would say you don’t want to go to Columbia; don’t buy in Columbia. But that has now changed 100%. And some of the top real estate agencies are saying if you’re smart, you’ll look at Columbia.”

Goropoulos did admit, however, that CHI has never undertaken a project like this anywhere before, prompting resident Frank Doutrich to ask him why he thinks it will work here. Goropoulos replied, “I have faith.”

Council isn't fooling anybody that is smart, what a joke. These ridiculously high taxes will always keep people away. Realtors continue to say "you don't want to go to Columbia"!

That's just funny, the market trust said no to a gathering place buy stuff and leave, they didn't want people to sit around and talk

Besides, we're free. You have to pay for LNP.

Anonymous is an asshole everytime he shows up. Lol.

He shows up a lot.

Pay no mind to the simpleton, Cole! The rest of us are paying attention.

That's funny. Have you talked to a realtor lately? The housing market in columbia is on fire right now. Besides, school taxes are the killer, not borough...

And codes dept are also a killer

Yes, my niece is a very successful realtor in Lancaster City. She would never advise anyone to buy in Columbia, she has a conscience.

Why do we still have a council person that owes taxes from years passed?????????

The way it is set NO ONE WANTS ON WITH THE REST OF THE ONE SIDED PEOPLE THAT HAVE BEEN ON THERE FOR (to many) years .

"Major renovations to the building will be the responsibility of the borough, but CHI will be responsible for renovations for the restaurant". Nice to have un-found money all of a sudden. Market could have been much more. Could have done those before and it might have made a difference and not had to had to close. AC would have been a nice addition or even fixing the floors. Just my .02