Local business owners and landlords voiced their opposition to the borough's Knox Box ordinance at Wednesday night's legislative committee meeting. In a gathering full of sound and fury, facts and opinions were tossed about, but in the end nothing was resolved. Those opposing the ordinance expressed reservations about the safety of the Knox Box and the mandatory nature of the ordinance and said they simply wanted the right to choose. The committee gave no definite assurance that the ordinance would be revised, amended, or rescinded.

The ordinance requires all places of business and various other establishments to have key lock boxes, commonly known as Knox Boxes, installed and accessible to firefighters and police. The ordinance was passed in December 2017 and gives business owners until this December to comply. At July's borough council meeting, several citizens voiced their opposition to the ordinance. Further information on the requirements of the ordinance can be found on the borough's site here: https://ecode360.com/33113294 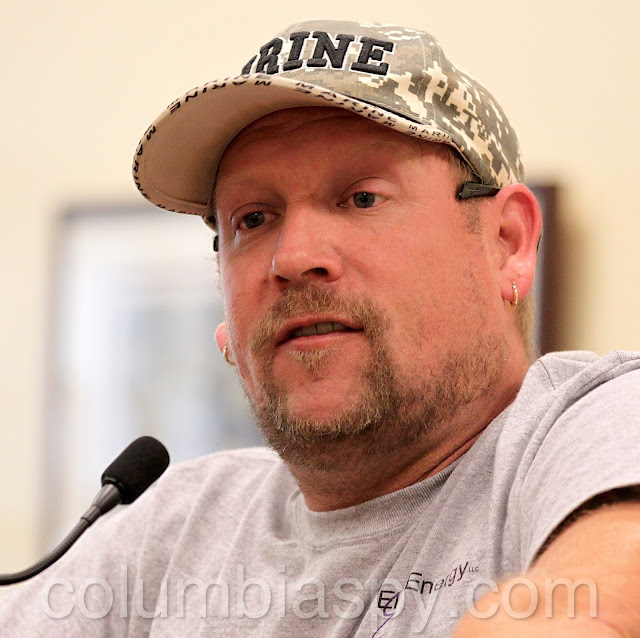 Bruce Murray: "I don't think it benefits me to allow you access to my business."

Bruce Murray, owner of Elite Energy LLC, expressed concern about credit card information that could be exposed if a Knox Box were breached at his business. He said he does not understand why anyone would need access to his property. "I feel like I'm responsible for 7200 customers," he told the committee. 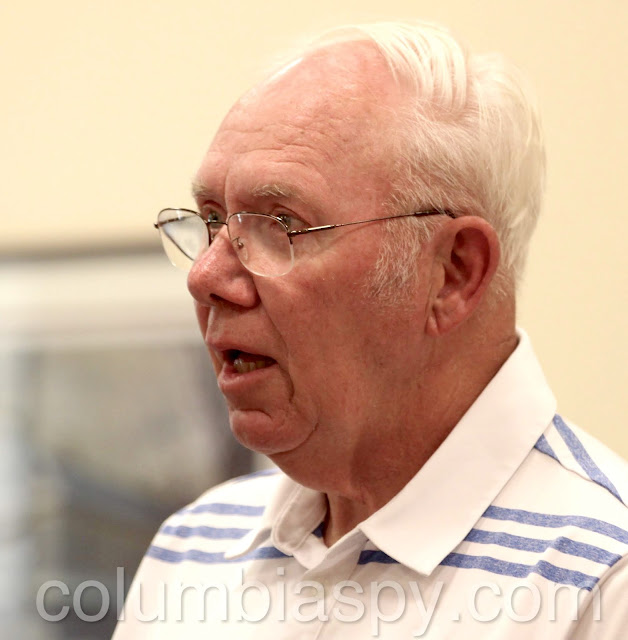 David Mountz: "Does this mean that anybody that has a door that locks has a restricted access and therefore has to have a Knox Box?"


Attorney David Mountz said that his office building was recently subjected to a code inspection and he consequently had to install five carbon monoxide monitors, 10 smoke alarms, and five fire extinguishers. He felt that it was "overkill" for a two-and-a-half story building used as a law practice. He said that at the time of the inspection, he was not notified of the Knox Box requirement but later received a letter notifying him. He asked for an explanation of the criteria used for requiring a Knox Box. 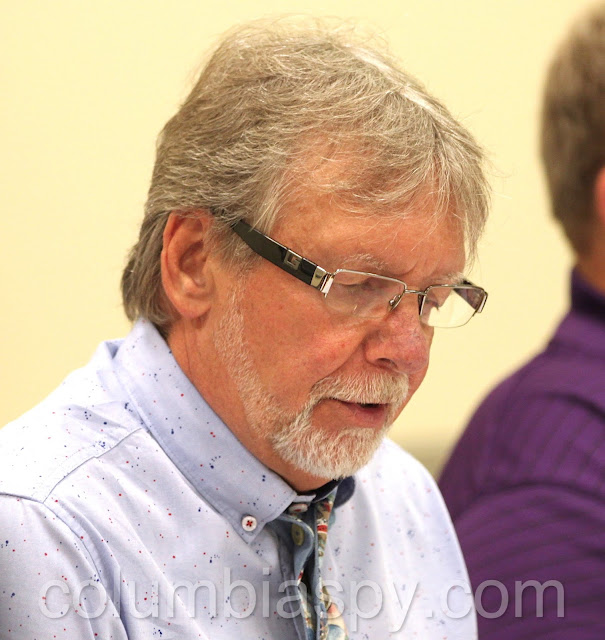 In the interest of time, Legislative Committee Chair John Novak asked commenters to limit their questions during a conference call with a Knox Box representative. After the call, however, he allowed virtually unlimited citizen input.

After several commenters had addressed the committee, Legislative Committee Chair John Novak asked Larry Lulich, a Knox Box Company representative, to join the discussion from Texas via phone, for part of the meeting. Lulich was invited to answer questions and address concerns, but ultimately did little to reassure doubters. 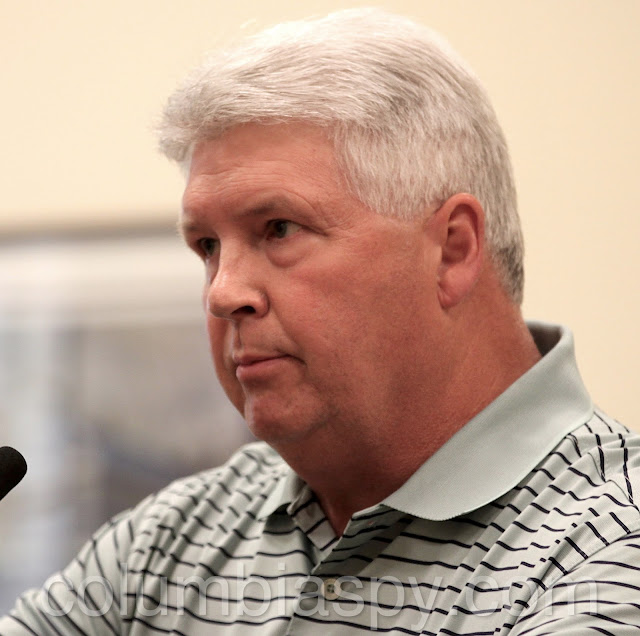 Dr. William Kraft told the committee: "When you're telling me I have to do something and won't turn around and do it yourself, that is hypocrisy."

Dr. William Kraft, a Columbia chiropractor, was the first to question Lulich, and the the exchange soon became heated. Kraft seemed frustrated by Lulich's apparent sidestepping of his questions. Kraft told Lulich he is concerned about access to sensitive patient information in his office. He asked if Knox would be responsible for a breach of its lock box if patient records were exposed, and Lulich replied that Knox is just the manufacturer and would not be liable. Kraft told him that his insurance does not cover breaches of patient records and Lulich recommend changing policies, triggering laughs and jeers from the audience.

Kraft also mentioned several incidents in which Knox Boxes were compromised. Lulich said the behind-the-scenes reality differed from news reports which he labeled "fake news." He said Knox is not responsible for any damages related to its products. He again said Knox is simply the manufacturer, a mantra he fell back on several times during the meeting. 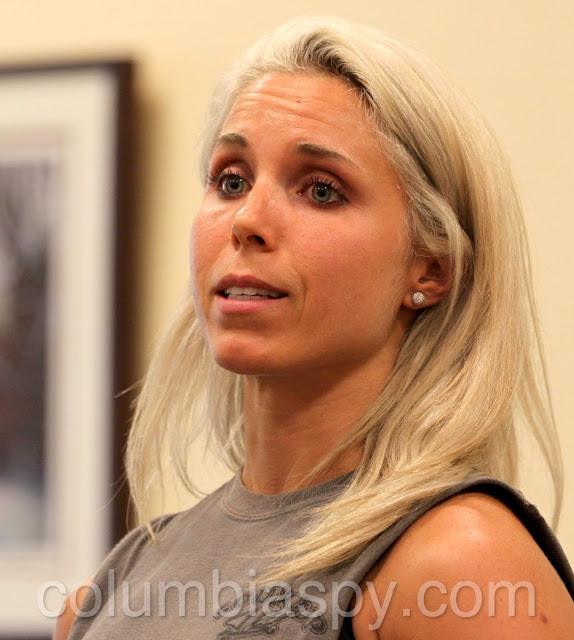 Keena Soukup: "We want the right to choose."


Keena Soukup of Soukup's Automotive, stated for the record her understanding that "Knox Box has zero accountability for anything that happens." She continued, "To us, that means that accountability is going to fall on the borough." She said businesses are being forced to install the boxes. When Lulich told her that having a Knox Box is no different than having a sprinkler system, Soukup replied, "The difference is sprinklers don't allow people into my building." Soukup had previously circulated a petition with dozens of signatures of business owners and others opposed to the ordinance, which she asked to present to the borough manager at the meeting.

Chief Kemmerly defended the Knox Box as being valuable for saving time and property. "It's easier to take 10 seconds to get that key out of the box to open the door. It's going to take us longer to break in." Kemmerly said having a Knox Box available can prevent property damage because fire personnel would not have to break down a door to enter a building.  "We're trying to save property damage. We truly, truly are." 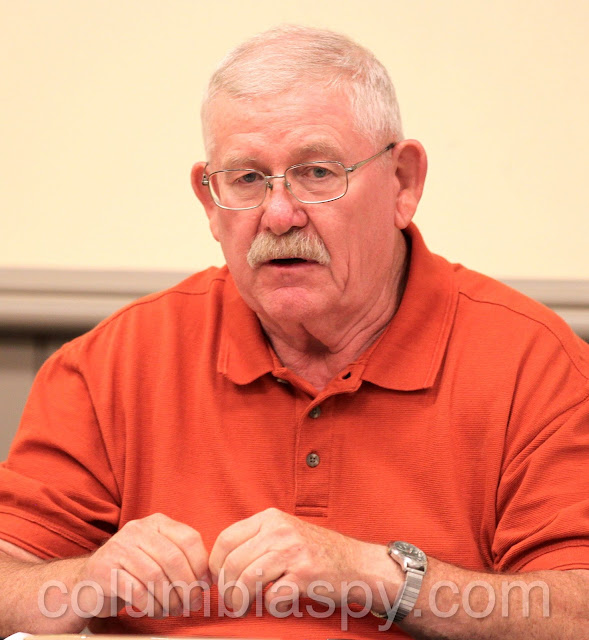 Mayor Lutz: "It should be up to the property owner."

After hearing all arguments, Mayor Leo Lutz said that if he were a business owner, he would install a Knox Box, but that owners should have the right to choose. "If a business wants to opt out, let them opt out," he said, adding that if people could continue to be educated about Knox Box use, they might gain trust about the issue. He said owners who opt out would need to sign a waiver releasing the borough from liability for any damages incurred in the event of a fire.

When questioned about the next step, Novak said "The ordinance is what it is and does remain in effect. If there are any changes made to it, it would be discussed." He noted that since the issue is one of safety, the next discussion would occur at a safety committee meeting. Novak reminded everyone that the ordinance was eight months in the making and the public had an opportunity to weigh in on it during that time.

Unless these business owners have alarm systems and no internet access, there excuse of possible theft of information is invalid. You have bigger issues to worry about then a Knox Box

You will see once again the opinion of the residents and or business owners don't matter to them, and that's very sad.

Actually, part way into the meeting, I brought up the question of a "waiver" which is being used in another municipality. It was not discussed or mentioned prior to my question. The mayor then seemed to favor an option to "opt-out." Sharon Lintner

I don't quite understand the logic of the comment:
"Alarm=true" and "internet=no" = "information theft=INVALID"
Can the poster please clarify this statement, because I don't get it?

You keep saying "Knox Box". Ordinance says lock box. There is a choice. Abs I think it is a farce for q local businessman to accuse a "rogue" fireman who might steal a key of gaining access to his files when he doesn't even have a security alarm. Now why would someone go to all that trouble when all they have to do is kick in his back door. Ridiculous.

First of all, it is the "KNOX" Box that is required to be purchased. There is no other choice. It is this Box that you are told to buy, under the Lock Box Ordinance clause. Second, if a "rogue " as you put it breaks into my office with a key, there may be some time until that breach is detected as well as they may enter multiple times. A broken down door will indicate a breaking and entering situation and the police will be called immediately and patients informed that their sensitive information may have been compromised. Big difference

On going issue with council , they already know how they will vote and don't care about what the citizens want , a small groups agendas are now laws, IS THIS HOW ITS SUPPOST TO WORK?

Why knox boxes , there are cheaper boxes out there... KICK BACKS AGAIN??????

Remember when Columbia had 5 fire companies , but when a few (PEOPLE ON COUNCIL AND FIREFIGHTERS) wanted it down sized look what happened, 1 fire company and less fire man . Now they want to have keys to enter a burning building , break the door down and fight the fire , if it is a false alarm have police call and secure it till owner arrives, this is a control thing and the borough is behind it , more back door things , citizens don.t go to meetings because it is the same thing , they vote how they are going to no matter what people say, this is like a dictator and cronies running a town, when will council ever wake up ? They don't realize what they look like , but I know what is being said about them and others do to , it will run over to there personal life if they know it or not, so council let it be said if you are part of something do the best you can do for all the people not just a few. Like comments that the mayor Lutz and Mary w build the money pit , NO THE TAX PAYERS DID , maybe not the extent it was built but the tax payers pay these people ,now those people should do WHAT THE TAX PAYERS WANT FOR THE WHOLE TOWN not just a few.

the fire company runs about 500 calls per year. How many times did they have to break down any doors during the last year or so.

Can someone from CBFD chime in on the stats of how many real fires and how many were false alarms? I don't member any businesses on fire cept the MotorCycle Den recently.
Okay, so just make any business that is protecting it's property with an alarm system,
get the lock box, to prevent the very annoying false alarm, and send them a BIG fine. when we all know it is gonna happen

Some things go with out saying , make bad things happen , be known forever for them .

For the 178 boxes needed taxs can pay for them, the bad decisions council makes (like 208-210 locout st loss of 149,999 dollars) it is peanuts to pay for the boxes,why not have them on every building in the borough if they are that good.

Not sure who wrote the last post about using a key to go into a burning building!!!! Un educated people talk like that, also a fire co. Also runs many other calls other then fires, a simple gas leak, could lead to way more damage to property then it needs to be, a simple auto matic fire alarm, could be faster, all with the knox box!! But then again if you have a buisness, and its not sprinklered, or smoke detectors not working, it doesnt sound like you care about your buisness anyway, so getting insurance money is just another day of buisness, also columbia firefighters are all volunteer, keep that in mind,

Business are more likely to be hacked for customer/patient's information then for someone to use the Knox Box key to get in to steal information.

Darn It, can I return the one that I just bought ??

I’d like to see some statistics on small businesses break in rates compared to hacking then... dumb