The draft agenda for Wednesday night's legislative committee meeting is shown below. The borough's Knox Box ordinance is scheduled to be discussed. The ordinance requires all places of business to have key lock boxes, commonly known as Knox Boxes, installed and accessible to emergency personnel. The ordinance was passed in December 2017 and gives business owners a year to comply. At July's borough council meeting, several citizens voiced their opposition to the ordinance.

A phone conference with a Knox Box representative is scheduled for Wednesday's discussion. In a break from precedent, the committee will limit citizen comments (see below).  Historically, committee meetings have been informal work sessions in which citizen input has been welcomed without strict limitations. 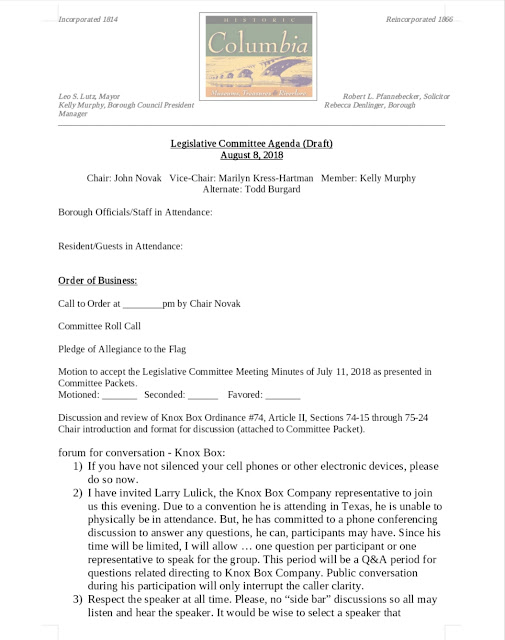 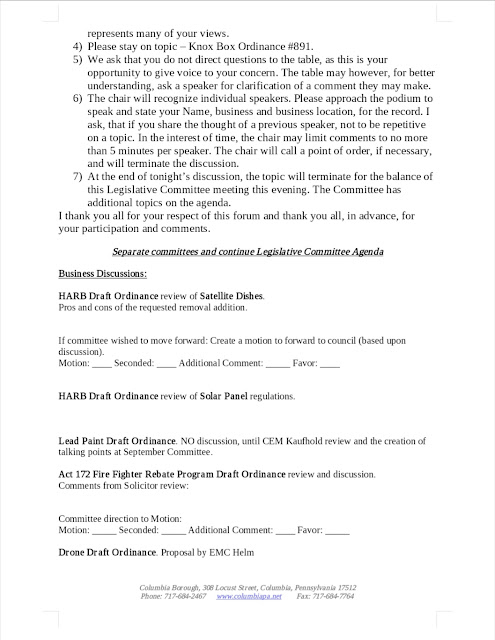 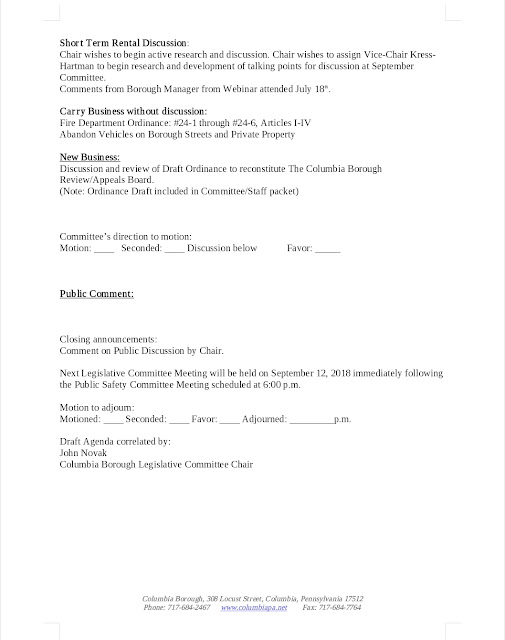 Don't see it as limiting comment, just trying to keep the meeting under control. You can say a lot in five minutes if you are organized and clear with your speech.

I have never seen an agenda targeting the gallery. I, if and we is not appropriate for the starting of line items on an agenda because it is defensive for controlling an audience. Having correct answers for the citizen always shortens the talking points.

"It would be wise to select a speaker that represents many of your views".
So, in essence, only the majority should express their thoughts....Seems legit to me!

Robert's Rules of Order is supposed to guide Columbia Borough's actions. There's more on that and the construction of meeting agendas here: http://westsidetoastmasters.com/resources/roberts_rules/chap2.html

This Penn Live article, perhaps, says that agendas can be confusing (When it comes to government meetings, not all agendas are equal): https://www.pennlive.com/news/2016/03/when_it_comes_to_government_me.html

The mayor said committee meetings are informal. One may ask questions and make comments during the meeting, no signing up and no need to go to the podium. Hopefully if committee members interject it will not count towards the five minutes. Every person speaking should be timed equally. A five minute rule should be put in place for those elected officials that pontificate. Residents have to wait hours at council meetings for a chance to voice their opinions. Now they will have to wait at informal committee meetings too. The taxpayers in Columbia are way too easy on their elected officials.

These days with 24/7 fire and security systems monitored thru cell phones with capibilities to remotely unlock pushbutton door locks, it seems like this law is a little dated. These people are living the 80's mentality.

Astute observation. In the rapidly changing world of digital technology, 5G speeds as high as 20 Gbps ... who knows what's next.

Heck, there's a local company ( https://vizpin.com ) that offers cloud-based technology that "Grants and revokes access to anyone, anytime, from anywhere without having to worry about cards, FOBs or PIN numbers – your phone does it all, even when networks are unavailable."

Brings another question to the surface, though. What about any business that already uses digital (keyless) locks? What would the glib sales representative have to say about that?

Technology advances, and will continue to advance, so swiftly; forcing folks into obsolescent fixes is worrisome.