Council plans to clamp down on fireworks in the borough 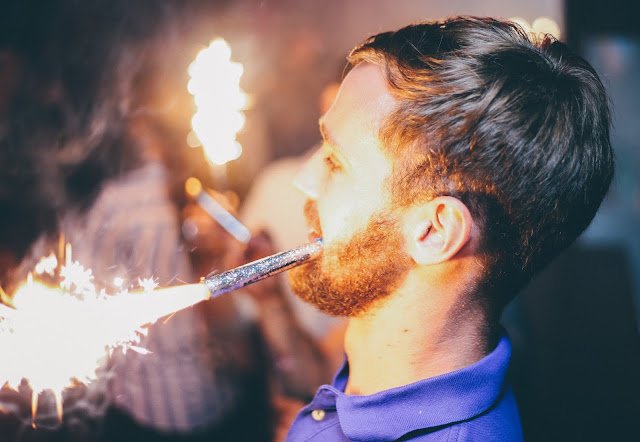 According to a statement read by councilman John Novak, who is also chair of the borough's legislative committee, the proposed ordinance prohibits the lighting or discharge of fireworks on public property without permission from the borough. It also prohibits such use on private property without the express permission of the owner. In addition, fireworks may not be discharged within 150 feet of any building. The ordinance also covers all borough-owned parks, sidewalks, streets, and public buildings. The ordinance will take effect in accordance with Pennsylvania state law. According to Novak, the ordinance does not cover school district property, which is seen as private. It will be up to the district on whether or not to allow the use of fireworks on its properties. Borough Manager Rebecca Denlinger cited a state fireworks law that describes a violation of the law as a summary offense which, upon conviction, carries a maximum fine of $100.

Code Enforcement Manager Steve Kaufhold said, "This is a great ordinance. I think it's a necessary ordinance," adding that the next step will be to find a way to enforce it. Kaufhold said that a fire was caused by the discharge of fireworks on North Third Street during this year's Fourth of July holiday. The fireworks discharge originated in a second floor apartment, which subsequently burned the kitchen of a downstairs apartment, causing $15,000 damage. Kaufhold also recalled a fire at Bully's Restaurant a few years ago that was started by a single bottle rocket fired from across the street.

The proposed ordinance is a reaction to a state law enacted last year allowing the purchase of various commercial grade fireworks, and to complaints from borough residents. Novak said of the ordinance, "This has been, obviously, a concern of many of the citizens of Columbia, and the borough has recognized that position and situation, and the borough is reacting within the state laws to be able to provide guidance for the borough on how fireworks can be used." 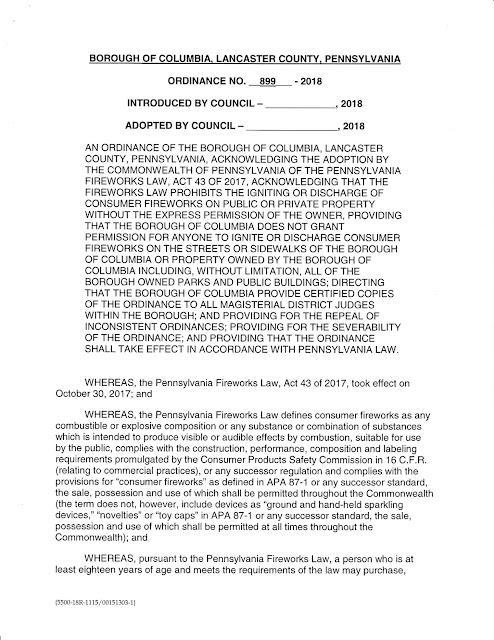 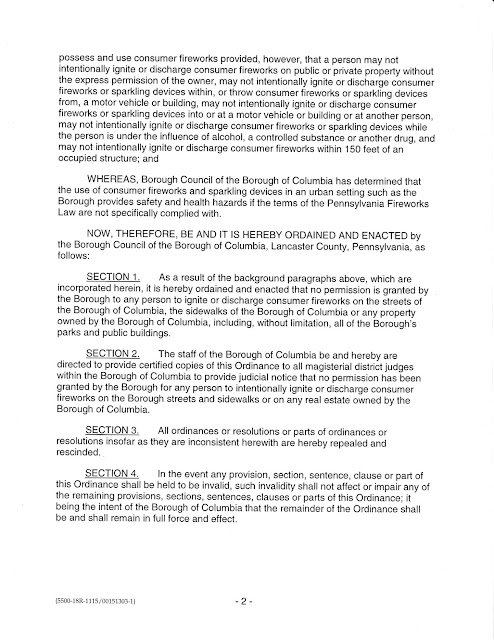 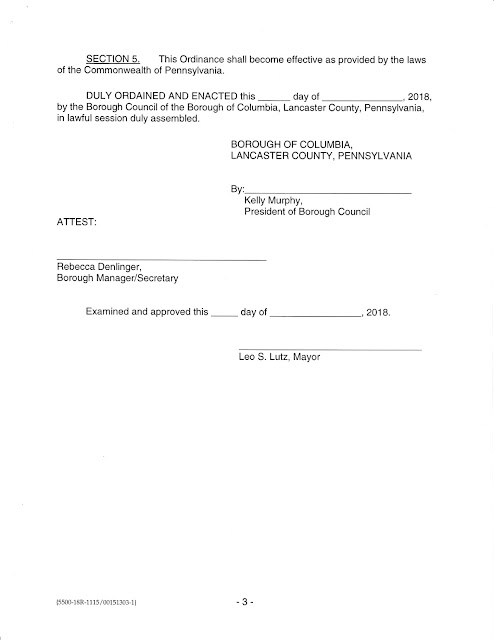 Good deal, then since the borough owns all sidewalks, i hope to see the borough outside of my house to shovel there sidewalk, at the end of every snow fall next year, thanks for ruining just about everything,

The council president told residents that last year he went outside to talk to the people setting off fireworks. He implied that he was able to reason with them. That approach didn't work out so well for Mr. Meley. He asked a gang to quiet down so he could sleep and it nearly cost him his life. We are paying police to address the fireworks issue, this is not our job. I do not think any resident should be encouraged to approach anyone breaking the law. This will only lead to trouble.

Will this be enforced along the river front? Probably not, their special.

Yeah no more freedom celebrations you dang hoodlums. Lol, happy Independence day sorry some of you couldn't sleep while others where celebrating such a proud holiday. One that represents our great escape, and our rise to freedom. Many of our founding fathers died for this freedom, we shall celebrate them boldly.

I don't think it is the disturbance of sleep as the main issue. I believe the issue is life safety; fires, accidental injury to the person igniting the firework or observers. That being said, I have enjoyed some pretty good aerial fireworks lately!

I think the FINE should start at $500.00 so that the EVIL DOERS get the message, $100.00 is pocket change to most of these people and they will continue to abuse the LAW.

He didn't say they were kids under 12.

Now that is mayors village let it alone , no codes or police welcome. No investigation on fence damage just bill the tax payers for repairs .

A $100 is pocket change? Dude, I am struggling to keep a roof over my head and food on the table.

I called police about out of hand fireworks too close to adjacent properties and they never came...they only have to patrol a 2 mile radius

I'm all for a proper fireworks display by professional handlers.

It's those being set off in the alleys and neighborhoods at 2:00 am that are dangerous and unnecessary. Those are not being done to celebrate freedom.

The fireworks should not be stopped but I think people should respect where they r set off and what time.

i think your all missing the point. First and foremost the MAJORITY of these clowns are not certified, licensed pyrotechic specialists. Way too many people are ignorant, lazy, just don't care and irresponsible. Those are the ones you should be thanking!

This ordinance is nothing but replication of the state law. Huge waste if tax payer dollars to have solicitor prepare it and advertise it since it already a state law. Bottom line, consumer fireworks (the ones that go in the air) can't be set off within 150 feet if an occupied structure according to the state law. That eliminates almost every area in columbia.. Including the cottages along the river.

Steve kaufhald doesmt even live in columbia, he shouldnt even be employed by columbia, by rights if you want to work for anything columbia try living there before you have an opinion, just like the highway dept, etc,, council, pathetic

$32,000 fence somebody needs there position taken away , these people are nutz , now they want to buy the old air strip , they never even break even, the borough is NOT a fund for council to buy private property, they (tax payers ) loose look at 208-210 lost 125,999 dollars!

At least 2 more borough people have cottages there.

How much are the taxes there ? not as much as the rest of town that is for shore!

I agree a lot of things are changing because Steve Kaufhold dreams up things. All people who work for the boro should live in Columbia. Like the person they just hired did they not have anyone in the 400 applicants? That was a fixed job too.

I called the police twice on two different nights for fireworks. The neighbors were setting them off over my 100 year old house. The debris was landing on my roof. Never got a call back from the police or even a drive by. My biggest fear was that the roof would catch fire from the debris.

100% Agree! Just the other night at 2nd and Union, the entire intersection was being used to set up fireworks at 10:30pm. The people setting the fireworks off did not make any attempt to move the various boxes out of the street so the vehicles could continue through. Unbelievable disrespect. I would only hope they get fine $500. What about working citizens that pay taxes and are trying to sleep, not too mention drive on a public street???

I think we should shit down all the bars in town, people leaving the bars have caused more accidents for the boro. Then fire works!!

I decided to take a walk around Town the other night and I was so (DISGUSTED) by what I saw, they talk about Code Enforcement Officers but as i walked I saw more weeds growing along sidewalks, in yards and any place they can squeeze thru. What is the Code Officers job entail in this town? Does he come to work and jump into a Pickup Truck and drive around wasting gas, why doesn't he start walking the streets with a note book and write down addresses with high weeds and confront these people and have them clean up their weeds. There are more weeds growing in town than there is up along Rte 441 and along the tracks along the river. Get out of your truck and do the job you are paid to do. STOP STEALING THE TAX PAYERS MONEY AND DO YOUR JOB.

how about the borough spraying weeds in gutters, oh they spend all there time at the money pit.

i agree, the code officers SHOULD BE WALKING THE BEAT DOWNTOWN EVERY SINGLE DAY

Easy solution. Can all fireworks and the sale of fireworks in the borough Except for those put off by pyrotechnic professionals and put more teeth into the fines.

the council is above the law and has NO common sense, make laws that No one knows about,waste of money like the money pit.